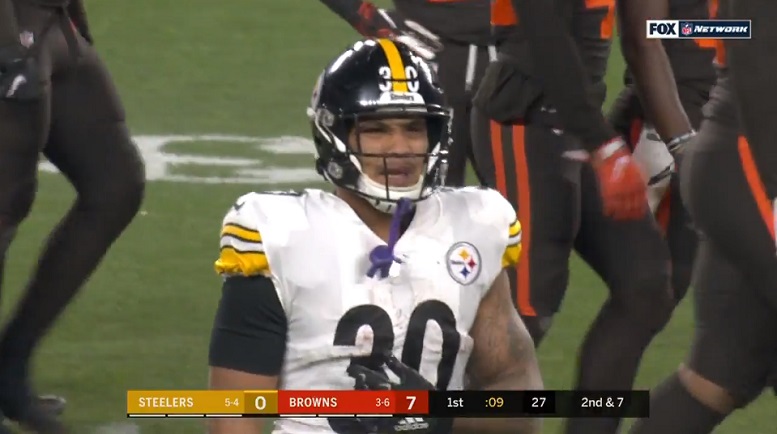 The Pittsburgh Steelers will play the Cincinnati Bengals on the road next Sunday and they’ll likely do so without running back James Conner, who aggravated his AC shoulder injury early in the Thursday night loss to the Cleveland Browns. Not only will Conner likely miss the Week 12 game against the Bengals, to hear him talk on 93.7 The Fan on Monday evening, he’ll likely miss the rematch against the Browns in Week 13 as well.

Conner said Monday during his radio interview that he thought he could play through his AC shoulder joint injury Thursday night but that the pain was too much to deal with right from the first carry of his and on.

“The pain was too much and I just couldn’t go,” Conner said.

Conner, who played all of 13 snaps against the browns before leaving the game for good, was asked on Monday if he has any idea as to how much time he might miss now and what the next step is for him as part of the rehab process.

“Next is just to continue to do what I was doing before,” Conner said. “I made drastic progress when it first happened to when I tried to play on it. But again, and as before, it’s something I can’t put a timetable on. I just have to do what’s best for my body and the team and if that probably means more weeks or games I have to miss, I’m not sure. I can’t put a number on it. I have to just continue to attack the rehab like I’ve been doing. And again, this is a time thing, so just got to wait a little bit longer. I wish I did know, but I don’t.”

So, what are the doctors telling Conner about his injury and rehab?

With Conner sidelined indefinitely the Steelers will likely turn back to running back Jaylen Samuels as their starter against the Bengals and perhaps rookie running back Benny Snell Jr. can return from his knee injury on Sunday as well. We’ll find out if there’s a chance of that happening when head coach Mike Tomlin addresses the media on Tuesday. Snell has missed the Steelers last three games.

By the sound of things on Monday, the next game that Conner might be able to pay in will be in Week 14 against the Arizona Cardinals. At worst, hopefully he can return for the Steelers Week 15 home game against the Buffalo Bills. The Steelers, however, could be out of the running for a Wild Card spot come that time and especially if they lose two of their next three games.

While Conner is almost certain to sit out Sunday’s road game against the Bengals, he isn’t sure right now if he’ll even be on the sideline for that divisional matchup as the team might want him to stay in Pittsburgh and continue to attack his rehab.

“I’d like to do it for sure, but we just have to communicate with our training staff and just make the best possible decision,” Conner said. “Not going into battle with the guys is very tough not being there, but if that means I have to stay back, and they want me to attack this rehab, then that’s going to be the plan.”

Conner has had a very disappointing season to date as he’s rushed for just 390 yards and four touchdowns on 102 total carries. He’s also caught 30 passes for another 242 yards and two touchdowns. Last season Conner tallied 1,470 total yards from scrimmage and had 13 total touchdowns in his first season as the Steelers starting running back. Since he was drafted in 2017, Conner has missed seven games to an injury of some sort.