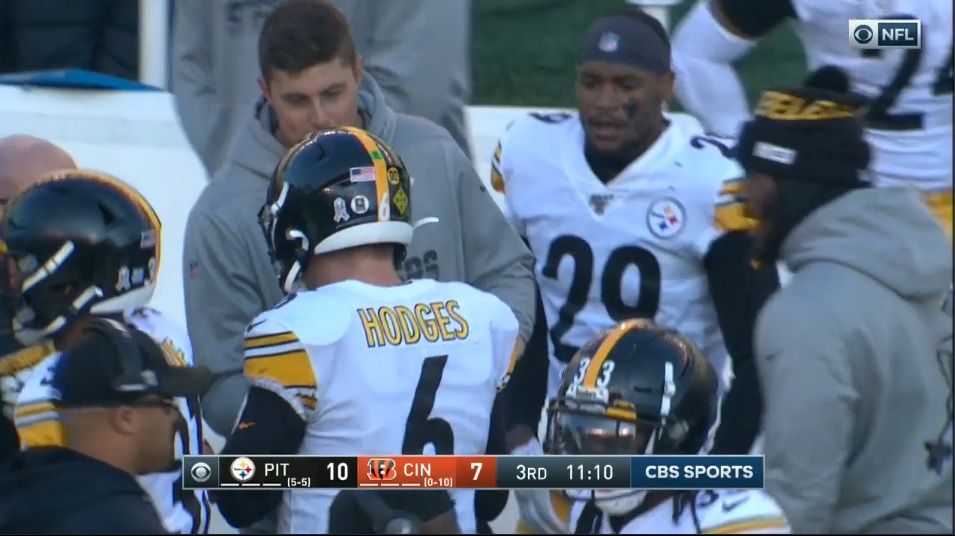 Mike Tomlin always says not to live in your fears. No QB on the Pittsburgh Steelers’ roster is as fearless as Devlin Hodges. That was cemented by the way he approached his first series in relief of Mason Rudolph. After a short throw complete to Jaylen Samuels, he fired deep to James Washington down the right sideline. That fell incomplete and Washington was called for pass interference but Hodges didn’t hesitate to go back to the well. He hit an open Washington the very next play, who did the rest for a 79 yard touchdown that gave Pittsburgh their first touchdown of the day.

After the game, Hodges talked about what was going through his mind on that play.

It was the biggest offensive play of the game, at a time where the Steelers’ couldn’t move the ball even if the Bengals had only 10 defenders out there. But Hodges provided what QB changes are aimed to do. A boost, a spark, something that gives you confidence to win the game.

But he also admitted he fed off that energy a bit too much and it hurt him the rest of the game.

“I can’t wait to go back and watch myself. Because I know after that first TD, I kinda get a little antsy, a little jitterish. Lot of excitement. I need to do a better job of settling down after a big play. Just get better.”

Hodges finished the game 5/11 for 118 yards and that score. But he was a clear upgrade over Rudolph. His ability to use his legs to keep the play alive and run if need-be is an element Rudolph simply doesn’t bring. It’s a critical component of playing QB in this era. Some of the top ones in football, especially emerging superstars like Patrick Mahomes and Lamar Jackson, are capable of making plays with their arm and legs.

Will Hodges start next Sunday against Cleveland? If Mike Tomlin knows the answer, he’s not telling anyone. But with the way Rudolph has played over the last six quarters and knowing how well Hodges has managed to play even with very limited practice reps, it’s hard to argue sending the man called Duck back to the bench.

Check out Hodges’ full interview with the media below.