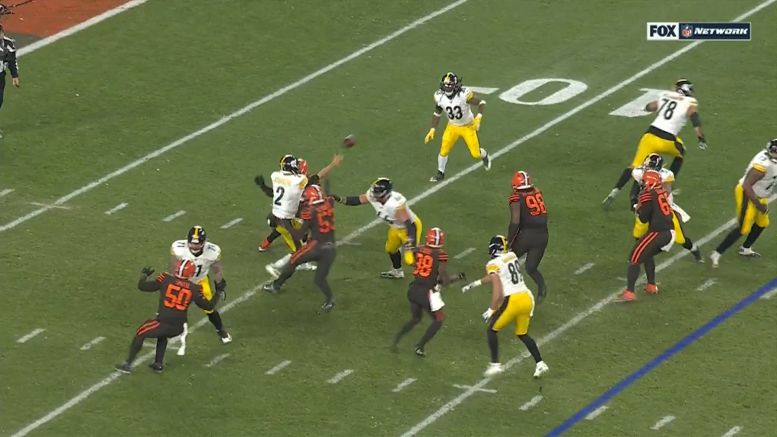 There are plenty of bad things that can happen to a person. A pretty bad one is being discriminated against or derided because of your inherent qualities, over which you have no choice nor control, such as your race.

While not at the same level, being publicly accused—whether intentionally or not—of deriding somebody with a racist epithet is pretty bad, as well. Especially if you are a public figure, and it takes place under the national spotlight. And especially if there isn’t clear and direct evidence that the accusation is false.

That is the boat Pittsburgh Steelers quarterback Mason Rudolph is in right now, after media outlets leaked a detail from Cleveland Browns defender Myles Garrett’s suspension appeal. In attempting to get his indefinite suspension reduced, he told the arbitrator that the quarterback had called him a racially derogatory name during their altercation.

Not that that would have an in any way justified his assault, nor would it have helped him get his suspension reduced, but the point is, it’s out there now, and the one who has to deal with it is Rudolph. Given that there is no evidence available that has been presented supporting Garrett’s claim, sympathy has largely swung in the quarterback’s favor, as most seem to believe he has been falsely accused.

But he was accused all the same, and not all will believe—after all, it can’t be proven conclusively that he didn’t say something. According to his teammate, Cameron Heyward, he went out of his way after yesterday’s practice to make it clear to him in no uncertain terms that he never said what he was accused of.

“He was pretty distraught” by the allegation, the nine-year veteran and defensive captain told reporters after practice. Rudolph was scheduled to speak with reporters himself, but the team canceled that media session after ESPN and other outlets published Garrett’s claim.

While Browns teammates universally acknowledged that none of them had ever previously heard an inkling of the accusation prior to it being disseminated through the media, not one of them suggested that they don’t believe their teammate.

Conversely, every single Steelers player interviewed also backed theirs. Both sides offered some variation of ‘he’s not the type of person who would lie’. Clearly, one of them is in this situation. In the meantime, Garrett’s claim has no material support.

“He’s being villainized by it”, Heyward said of Rudolph and the racist accusation, relaying that the quarterback told him, “’I’m going to be labeled at that’. I just don’t think that’s right. That’s my teammate. I’m going to fight for him. I’m going to do what’s best for him. That kid made a bad mistake, but he never crossed the line when he talked about a racial slur”.

In a statement from his agent, Timothy Younger, Rudolph’s representative said that “the malicious use of this wild and unfounded allegation is an assault on Mason’s integrity which is far worse than the physical assault witnessed on Thursday. This is reckless and shameful”.

This is damning either way. Either Rudolph really said something disgusting, or Garrett disgustingly accused him of doing so. Both are major failings and insults to basic civic discourse. The ambiguity of the lack of evidence, however, leaves Rudolph in limbo even if he is entirely without guilt in this matter.