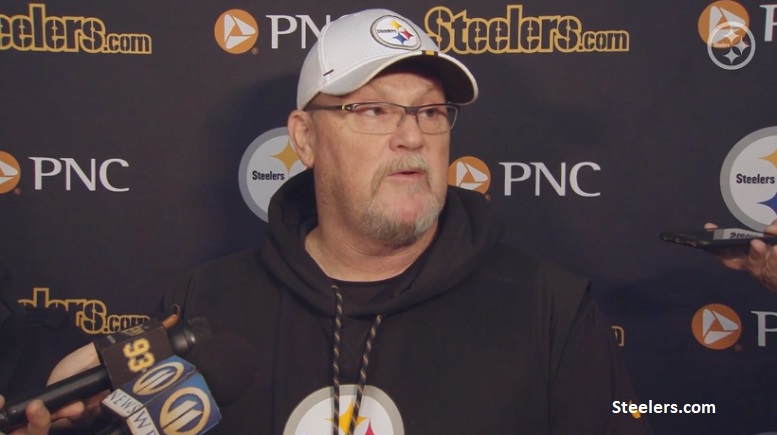 Against the Los Angeles Rams on Sunday at Heinz Field, Pittsburgh Steelers quarterback Mason Rudolph probably had the best overall game of his young career as the Oklahoma State product completed 22 of his 38 total pass attempts for 242 yards and a touchdown. Rudolph’s performance against the Rams wound have been even better had a few of his pass attempts not been dropped. On Tuesday, Steelers offensive coordinator Randy Fichtner gave his assessment of Rudolph’s play against the Rams during his weekly media session.

“I think it was his best game of consistently making decisions and putting the ball in proper spots,” Fichtner said, according to steelers.com. “So that lead to opportunities down the field and did a nice job with it. Put balls in places where we could catch them.”

Rudolph also met the media on Tuesday, and he was told that Fichtner had said earlier in the afternoon that Sunday’s game against the Rams was his best in terms of making decisions and then asked if it indeed felt that way to him.

“We have watched that game, but I haven’t watched it in depth because we have to prepare for Cleveland on a short week,” Rudolph said. “I think there is things you work on every week and you want to get better at eliminating presnap penalties, getting better in the red-zone, all types of things. With the moving parts of our offense, I was proud of the way we came out and played and moved the ball down the field.

“Obviously, we want to score more points when we get the ball in plus territory and turn those drives into seven points. So, that is still a work in progress, and I think we are all trying to move forward. I think our offense is getting really close to where we want to be.”

So, with what Rudolph was able to accomplish on Sunday against the Rams be considered any sort of a turning point for the Steelers young quarterback?

“Well, it’s baby steps,” Fichtner cautioned. “Again, a couple weeks here at home. I think that you can see a little momentum going for him just in breaking the huddle. Just in the simple things that you take for granted. But the confidence of pushing that group in any situation, backed up, going in, all those types of situations. You know, you see the growth every day.”

While Rudolph now has six starts under his belt and has played the equivalent of seven games, Thursday night on the road against the Cleveland Browns will be his first career start on a short week. Because of that, Fichtner was asked Tuesday if he’s worried about his young quarterback on a short week with the game also being on the road.

“Yeah, no doubt,” Fichtner admitted. “Only because it’s the first time doing it with him. He’s been here. He’s seen a Thursday. He knows his routine. He was just on the other side imitating a visiting quarterback. You know, it’s kind of interesting to see where and how much you feel comfortable from a game-plan standpoint.

“There’s a big base that we’re trying to grow in the offseason and training camp. You’ve got to lean on that as the type of things that, you know, what do you do well? Where can we push the envelope? Maybe push, push, push to try and look at some other things. But shoot, we’re leaving tomorrow afternoon.”

Rudolph also was asked on Tuesday about the short week that culminates Thursday night in Cleveland against the Browns and if because of the time crunch if it alters his own plan and preparation in any way.

“Yeah, it is my first time, but I thought [I got] good experience last year with the flow of the week with how fast it goes. How you got to really supplement mental reps for physical and take advantage of every meeting you have and all the meeting time with your coaches, and then when you go home, you kind of review. I had a dry run of it last year, it obviously, it was in a different position, but I feel good about it. I feel like our guys are going to turn it around quick and play well.”

How fast Rudolph and the Steelers offense can start on a short week against the Browns will be something to pay very close attention to. Just look at the Steelers opening offensive possessions from the six games Rudolph has started this season in the chart below.

Four of those six drives ended with a turnover with one other being a three-and-out followed by the punt. Even the opening possession against the San Francisco 49ers wasn’t much to write home about as it resulted in just a field goal after five total yards were gained on four plays following a turnover.

Hopefully Rudolph’s play Thursday night against the Browns shows him taking another small step forward in his progression as an NFL quarterback and even if that step is another baby one. A fast start Thursday night by the Steelers offense will also show that the young quarterback can handle short weeks even against a division foe and on the road.