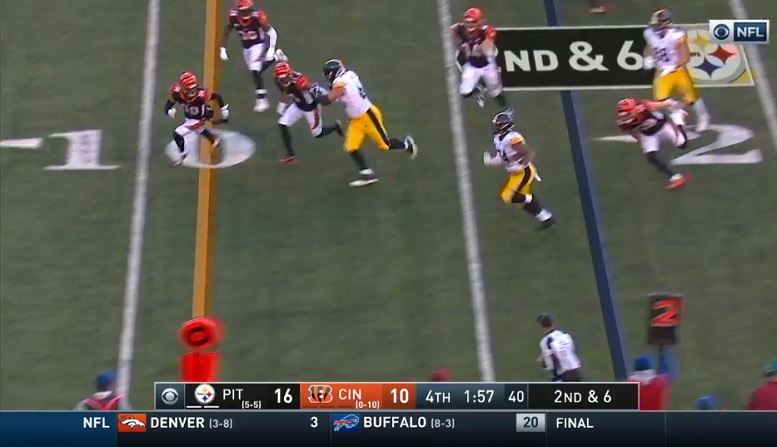 The Pittsburgh Steelers offense officially rushed for 160 yards on Sunday against the Cincinnati Bengals and if you remove the three quarterback kneel-downs included in those stats the number is actually 165 yards. In total, Steelers running backs combine to register 31 carries for 154 yards and more than half of those yards came via plays that included a guard pulling.

In total, the Steelers ran 14 running plays that included one of their two guards pulling and those plays resulted in 85 yards being gained. Right guard David DeCastro pulled to his left on 13 of those 14 plays. In fact, three of the Steelers four longest running plays against the Bengals came on plays in which DeCastro pulled left on and you can see those four plays below.

This season the Steelers haven’t been pulling their guards as much during games and that’s likely because the offense has had a tough time establishing any kind of a consistent running game. Additionally, Sunday against the Bengals marked just the third time this season that Steelers running backs combined to have 25 or more carries in a single game.

On Sunday at Heinz Field the Steelers offense will attempt once again to establish the run early and often against the Cleveland Browns, which is something the unit failed to do against them a few weeks ago on the road. In that Week 11 contest in Cleveland the Steelers only had starting running back James Conner for the first quarter because of him aggravating his shoulder injury. Once Conner left that game the Steelers were left with running backs Jaylen Samuels, Trey Edmunds and Tony Brooks-James, who has since been waived. Those three combined to carry the football nine times for a disappointing 37 yards.

In Sunday’s rematch against the Browns, the Steelers will rookies Benny Snell Jr. and Kerrith Whyte and those two had solid showings against the Bengals and especially with a DeCastro pulling out ahead of them. In short, DeCastro, Snell and Whyte might once again be busy players on Sunday against the Browns as the Steelers offense running the power might be just what the doctor ordered in this rematch and especially with rookie quarterback Devlin Hodges making just his second career start.