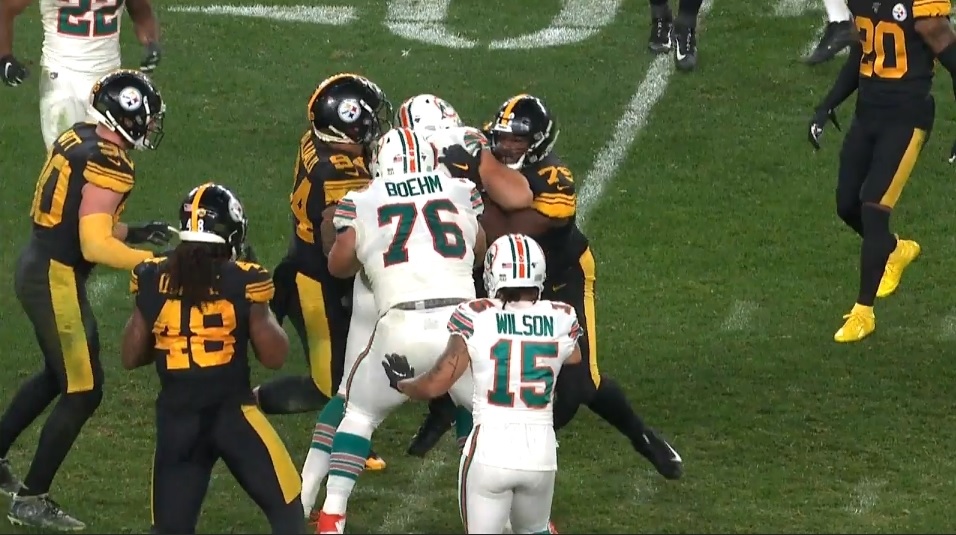 You gotta love Tyson Alualu. Truth be told, he doesn’t have many years left in the NFL. He’s 32 and in his 10th NFL season. But he’s having his best season in awhile, arguably his best as a member of the Pittsburgh Steelers, and you have to love his effort and attention to detail.

He’s embraced the team mantra of forcing takeaways. Punching and ripping the ball out. Though he hasn’t done it yet, it hasn’t been for a lack of trying.

I’ve seen it at least three times this year. The first against San Francisco, a play we pointed out at the time. Running hard to chase the ball from the backside and falling into Matt Breida with an unsuccessful attempt.

He followed that up by trying it twice more against the Miami Dolphins Monday night. The most obvious example came late in the game after left guard Michael Deiter caught a tipped pass. As Javon Hargrave stands him up, Alualu comes in and puts a good charge into this one.

I don’t think he actually ended up forcing the fumble, though the ball eventually came out (the play was ruled dead, negating a would-be Cam Sutton touchdown). Still, like the effort.

And it came early in the game. Alualu showing hustle to the ball on this completion to WR Preston Williams. Corner Joe Haden is holding him up so Alualu flies in by and goes for the punchout.

What I like most about these three clips is Alualu is being opportunistic but also being selective. Unlike the touchdown Pittsburgh gave up to Allen Hurns, where no one tried to wrap and just wanted to rip the ball out, Alualu is only doing this once the tackle’s been secured. Each time, someone is holding up the ball carrier. That’s when your taught to go after the ball. So if you miss, the runner isn’t going anywhere.

It’s a minor note right now because Alualu hasn’t been able to force a fumble. But persistence pays off, his effort shouldn’t go unnoticed, and he’s displayed heart and hustle since coming over from Jacksonville. Soon enough, I think he’s going to fling the football out and make a game-changing play. And it’ll be thanks to his effort and attention to detail.