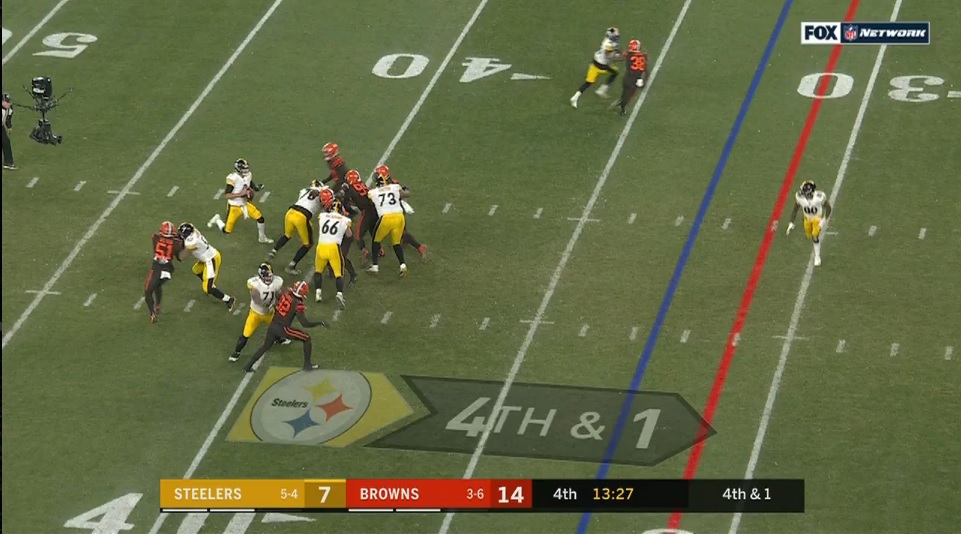 Any discussion over Mason Rudolph the next 48 hours will of course revolve around what Myles Garrett did to him at the end of Thursday’s game. Rightfully so. It was heinous, malicious, and Garrett should be suspended for the rest of the season. Let’s make that crystal clear.

But had that end-game insanity not occurred, we’d be discussing how abysmal the Pittsburgh Steelers’ offense was. There are some important caveats to that. Short week, young QB, and of course, the in-game injuries to JuJu Smith-Schuster, Diontae Johnson, and James Conner. This offense cobbled together felt like something out of a Week 2 preseason game than a 5-4 regular season club.

But that doesn’t absolve all of the issues. Of course it doesn’t. The receivers they had available got open in moments. Rudolph simply failed to deliver.

The best moment to show that came on their unsuccessful 4th and 1 in the fourth quarter of the game. After failing to complete a deep shot to Johnny Holton, the Steelers called another pass on fourth down. Rudolph’s first read here is Jaylen Samuels to the left flat. It’s a short-yardage concept they’ve used to success before, we actually did a video on the idea, but it’s well-defended here. Meaning Rudolph has to immediately get to his next read. 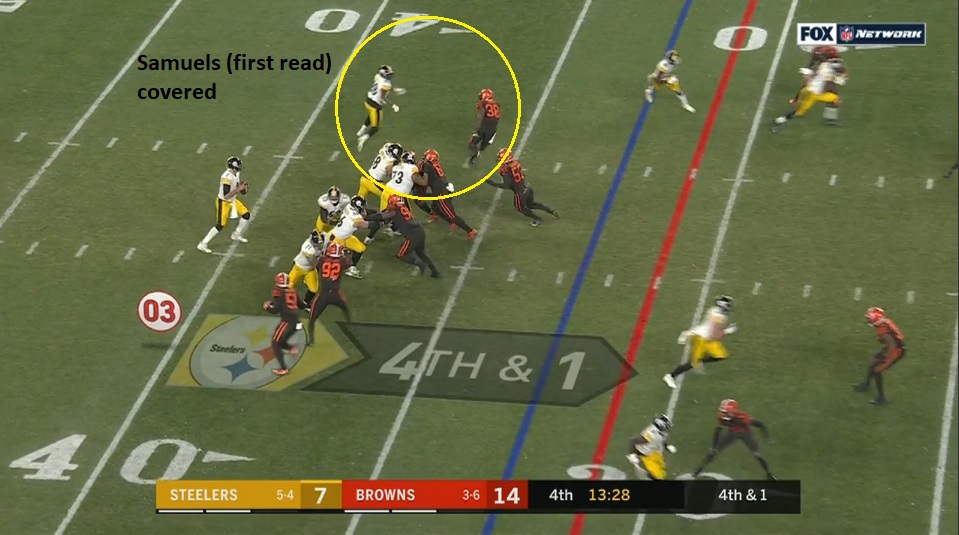 That next read is Holton, wide open to the middle of the field. I know it’s the TV angle and that can hide players off-screen (the All-22 won’t come out until next week and I didn’t want to wait that long to break this one down) but I’m positive there wasn’t a defender converging on Holton. It’s man-free and the defense forgot about him. He’s wide open and if Rudolph fires away immediately, it’s an easy completion and first down. 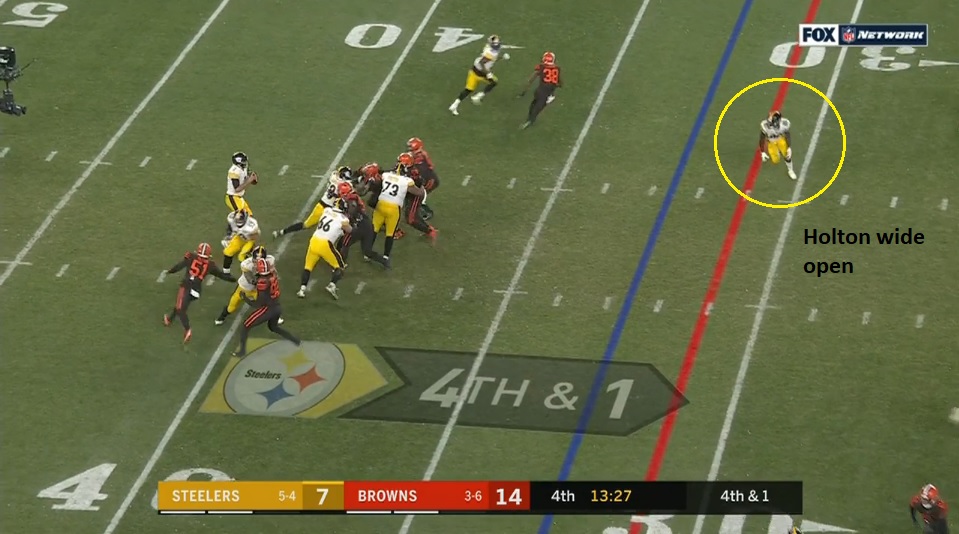 Instead, Rudolph seems hesitant, begins to drift backwards, you’ll see that in the GIF immediately below, and basically works himself into pressure, an issue he had against the Miami Dolphins. By the time he finally decides to throw to Holton, he’s getting hit, the pass is affected, and it’s nearly picked off. Just look at all the wasted time here.

Let’s go ahead and take a look at the entire play. Broken it down with some playart to show the concept and Holton being so wide open. Hope that provides a better visual.

Is there some pressure here? Sure. But that’s life in the NFL. That’s life when you’re down, when you’re throwing it 40+ times as he did last night, against an aggressive defense.

Here’s what Rudolph has to get better at. I think he knew he wanted to hit Holton here after seeing his first read – Samuels – taken away. But he tried to shift in the pocket to reset his feet and throw from a cleaner base.

What he has to understand is the NFL is messy. You don’t always get to throw from a clean, fundamental base like this is a 7 on 7 drill. Throwing off platform is a legitimate skill and one, and I know we’re talking about a Hall of Fame quarterback here, Ben Roethlisberger does really well.

My favorite play of Ben’s last year came to close out their victory against Tampa Bay. Accurately hitting Smith-Schuster while throwing off platform, this throw is all arm, on 3rd down.

The best play from Ben Roethlisberger in 2019? One most people probably forget. To close out the win over Tampa.

Rudolph didn’t have the time to try to find a safer part of the pocket to reset his feet (not that it ended up being any safer anyway, he just drifted into another defender). He didn’t need to. Open receiver, short throw, fire away and complete the pass.

That’s mobility within the pocket. Being able to slide so you can throw from a sound base, sure, but also have the flexibility to work a messy pocket, throw from any angle, because that’s what’s required playing QB in the NFL. Knowing when you can move, when you gotta just get the ball out, even if it isn’t how things are “coached up.”

Some of the best QBs in today’s NFL are great improvisers. Working on the fly, adjusting to what the moment requires.

Rudolph is a smart guy. He knows the rules. And he’s trying to tick off the “checklist” of QB play. Set your feet. Open your hips. Proper weight transfer from back foot to weight foot. All that is important. It’s fundamental, the essence of the game.

But anyone great at anything, an artist, a musician, a quarterback, knows how and when to break the rules. This is one of those moments where you can’t follow the book. You just gotta get the ball out and make the play. Until he shows that, and let’s be clear, he certainly is capable of doing it, his ceiling will always be limited.