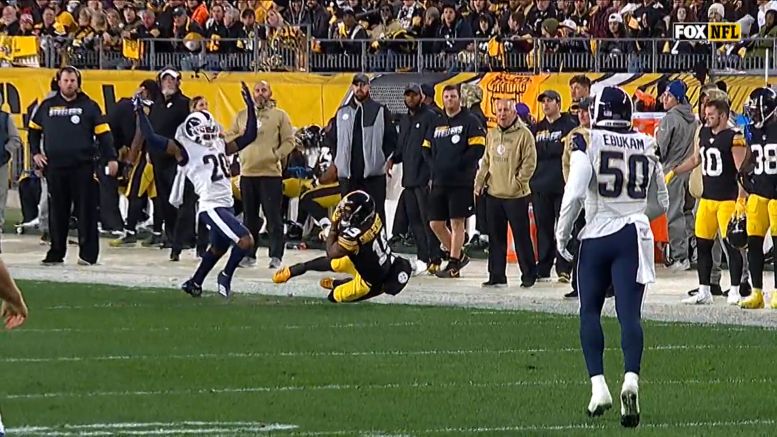 Three receptions for 44 yards. That’s all JuJu Smith-Schuster was able to muster last Sunday against the Los Angeles Rams. Very pedestrian like numbers but ultimately those numbers might leave some impressed considering that Smith-Schuster was followed by Jalen Ramsey for majority of Sunday’s game.

Truth be told, Smith-Schuster had a lot on his plate going up against Ramsey and while there was not a signature knockout blow, the Steelers’ receiver was able to hold his own against one of the game’s top corners.

Ramsey had a few comments on the Steelers’ young receiver before this game, calling him no Antonio Brown but praising his aggressiveness and physicality. Well, Smith-Schuster let the new Rams corner know very quickly that he would be in store for a very physical matchup.

With a free play on their hands after the Rams jumped offside, Mason Rudolph lets a deep ball go to his number one receiver and Smith-Schuster wins the first battle against Ramsey as he works his way back to the ball for a 20-yard gain. Lots of physicality on this route but the officials ultimately let them play and the Steelers receiver is able to bring it down.

There was not a knockout punch in this fight but Smith-Schuster definitely landed the most significant hit with his nine-yard reception here. It’s simply one on one with Ramsey lined up right over top of the Steelers receiver, daring him to beat him off the line. That is exactly what Smith-Schuster does as he shields himself from Ramsey’s jam attempt with his outside arm which also gives him an inside release to run his slant pattern. While this is still a very risky throw, Rudolph fits one into a tight window and Smith-Schuster hangs on.

With a top cornerback on him, it would seem plausible that the Steelers would attempt ways other than relying on Smith-Schuster to out wrestle Ramsey to get him the football. While the box score may not reflect it, the Steelers did try to find ways to make life easier for their receiver, the only problem was that they were unable to take advantage of those opportunities.

Rudolph told reporters last week that getting the ball to Smith-Schuster was at the top of his to-do list. Well, Rudolph must not be a fan of lists as he does not get the ball to his receiver here. Facing a third and long 13, the Steelers’ quarterback hits Jaylen Samuels on the opposite side of the field while Smith-Schuster looks ready for a catch and run. While the odds of converting are not in the team’s favor, one has to figure that the third-year receiver has a better shot than Samuels,, who running a route to the sideline, to pick up the yardage necessary.

Hard to really complain about this play as James Washington came down with the completion anyways but Smith-Schuster had a chance to pick a ton of yardage here had he been targeted. Vance McDonald runs a very subtle pick, drifting in front of Ramsey, giving Smith-Schuster the separation needed to catch and turn up field. That does not occur but once again, no reason to complain considering the catch and separation Washington produced on this play.

This play loses any chance for a big play the moment the ball is snapped. With Aaron Donald coming unblocked into the pocket, Rudolph is forced to get rid of this one very quickly. While Smith-Schuster may not have been the primary read, it is great to see him fend off Ramsey in the slot and create a throwing lane should the ball have come his way.

While the soundbites Ramsey offered in the days leading up to this game caused a lot of noise, the battle on the field was a lot less noisy. Regardless, it was positive to see Smith-Schuster defeat one of the game’s better cornerbacks one on one on a few occasions. Ramsey did not make a play on the football all afternoon and was even flagged for two pass interference calls, with one coming after he pulled Smith-Schuster’s jersey.

It may not have been flashy but the Steelers receiver grinded one out and came out unscathed. Anytime a receiver can do that against a former First Team All-Pro corner, it’s a victory in my books.