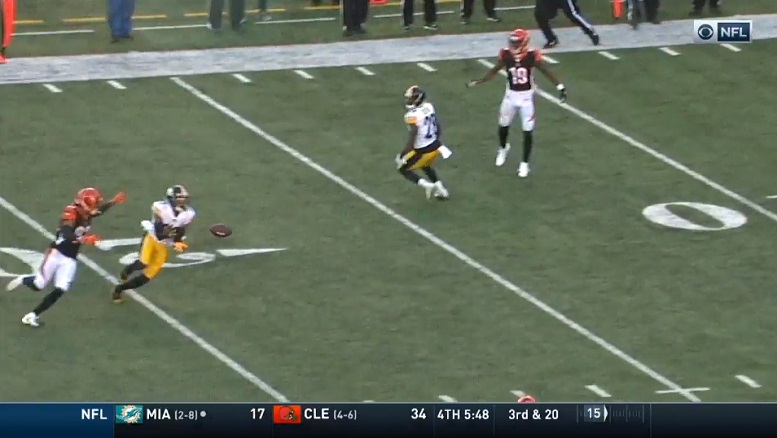 Just who is Joe Haden at this point of his career? The ten-year veteran cornerback is certainly still a reputable cornerback capable of holding his own but it is also fair to say that he has struggled with consistency this season.

Haden is a player that when he is on his game, he is still one of the more formidable cornerbacks in the league, as shown by his performance two weeks ago against the Los Angeles Rams. At the same time though, Haden has gone through periods of difficulty this season. When it’s good, it’s really good and when it’s bad, it’s really bad. Sunday’s game against the Cincinnati Bengals really captured the Dr. Jekyll and Mr. Hyde experience that the Pittsburgh Steelers’ cornerback has put on display.

Ryan Finley targeted Haden eight times last Sunday and he allowed two catches for 25 yards. He also gave up a touchdown and was flagged for pass interference but he also recorded three pass breakups. Hard to make a final verdict just off that alone, it certainly looks good but the tape reveals a few items that the numbers do not.

Here’s the first of the two completions that Haden allowed and it comes with him in coverage on Auden Tate. The Steelers’ cornerback has Tate covered, the only issue being that he has his back to the quarterback. It looks as if Haden is hoping to undercut the Bengals’ receiver inside but when Tate comes to a complete stop, it leaves the cornerback in an awkward position where he can only play the receiver and not the ball. Tate goes up and gets this one, giving the Bengals a first down.

The second and final reception that Haden allowed ended up going for a touchdown to Tyler Boyd and it is another example of everything going just fine right up until the actual catch. The Steelers’ cornerback is in perfect position as he does not bite on Boyd’s initial cut inside and stays toe to toe with him into the end zone. At the point that the ball is thrown, the receiver and cornerback are like two NBA players trying to grab a rebound and unfortunately it is Boyd that is able to shield off Haden and come down with the catch.

Now while Haden got unlucky on both the receptions he allowed as his coverage was great up until the final moment, he got awfully lucky on a few other plays. Plays that could have been devastating to the Steelers’ chances of victory. The Bengals tried twice to hit Haden with a double move, with one attempt causing a defensive pass interference penalty and the other pass falling incomplete due to an inaccurate throw.

Boyd runs a simple stop and go route and the Steelers’ veteran cornerback bites hard on it. With an impending touchdown staring him right in the face, Haden decides to cut his losses and grabs Boyd’s jersey, negating a touchdown but drawing a pass interference penalty. The Steelers end up only giving up a field goal on this drive so the penalty might have actually saved the team four points in the end.

Haden did not learn from his mistake and falls for a double move attempt once again and this time he is not bailed out by a pass interference penalty but instead by the inaccuracy of Finley. Bengals’ receiver Alex Erickson runs an out and up double move and completely fools the veteran cornerback. Luckily for the Steelers’ sake, Finley could not hit the ocean if he was standing on the beach and the pass drifts out of bounds.

Two plays that did not inflict much damage to Haden’s stat line but ultimately had the potential to turn his day from a decent one into a disastrous one.

Some may say it is not about how you start but how you finish. Well, after a shaky start, Haden found his footing in the fourth quarter, recording two pass defenses, both of which should have been intercepted.

Haden is in the slot on the play above and is right on Tate’s hip as he runs down the sideline. With no breathing room for Tate to make a play, the Steelers’ cornerback makes an incredible leaping effort and almost comes away with his second interception of the season but he is unable to hang on as he hits the ground. It is moments like this that show Haden’s ability to still be a top cornerback who is able to lock down the left side of the field.

Finley targets Haden on the very next play, just begging for an interception but he politely declines. Going up against Boyd one last time, Haden does really well here as he undercuts the route and is able to get his hands on the ball and nearly records an interception. This may very well be Haden’s best play of the day as he shows off his football IQ by recognizing the route while also flashing some nifty quickness as he closes in on the throw and records a pass defense.

Circling back to the top, figuring out just who Joe Haden, a ten-year veteran, is at this point is not an easy question to solve but his performance last Sunday does a pretty good job at providing an answer. Haden is a player who may have a few lapses in judgement from time to time and those moments can be very costly but when he catches fire, he is nearly unbeatable.