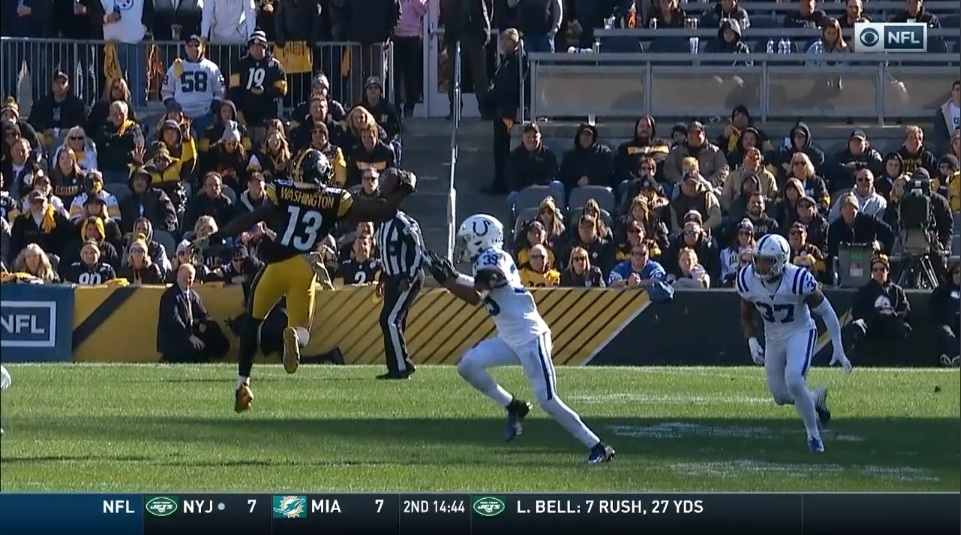 Without a doubt, James Washington’s performance Sunday against the Indianapolis Colts was his best in his year-and-a-half as a Pittsburgh Steeler. It wasn’t that the numbers were gaudy. Four catches for 69 yards would elicit an “eh, that’s decent” shrug from casual football fans.

How and where he made those receptions matters a lot more. He caught the ball short, medium, and long, three of which came as a high degree of difficulty. So let’s check out those three from an impressive afternoon.

His first grab came on a nine yard gain on 3rd and 7. Washington ran a curl route, blanketed by the CB, and showed physicality, concentration/coordination, and just great hands to come down with this ball. The corner did well to rip Washington’s arms apart, even briefly hooking his right arm, but Washington fought free and came down with it. 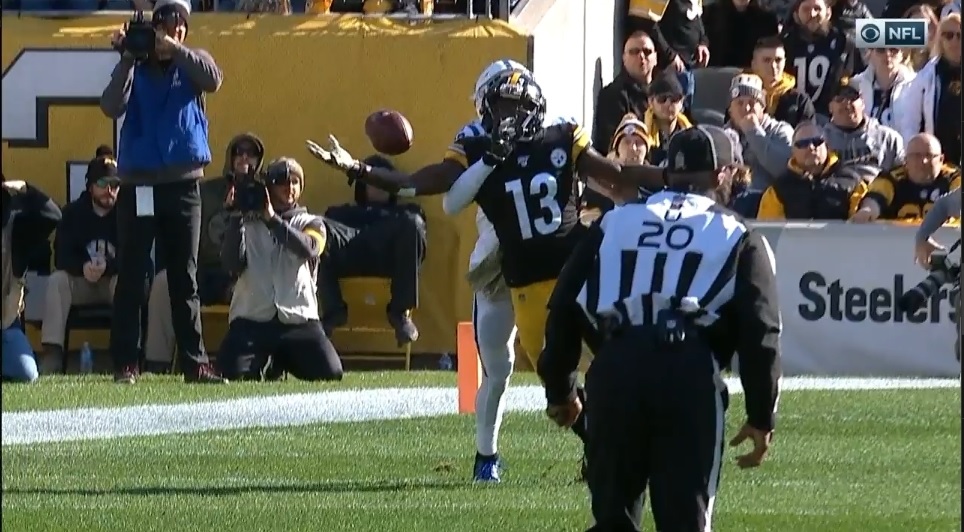 Next one went for 16 yards on a dig route to the middle of the field. Terrible throw from Mason Rudolph, who constantly threw behind him last week, but Washington made an amazing adjustment. Reaches all the way back with his right arm and makes a one-handed snag, bringing the ball securely to his chest to take the ball to the ground. You can see the extension in the header photo.

Now let’s go vertical. That’s why this guy was drafted, right? Go route down the right seam and a pretty hands catch to secure this one. Little underthrown by Rudolph but well placed and it was a monumental play with the Colts just taking the lead mid-way through the fourth quarter.

Steelers’ fans saw the blocking and effort last week. This week, they saw the receiver traits.

This is why you don’t sign someone like Josh Gordon. You draft and develop your high picks. Figure out what you have in guys like Diontae Johnson and Washington. Don’t want to be sitting at the end of Year Two for Washington still wondering what his future, and by extension the future of the Z receiver spot, is. Let the guy sink or swim. And now that he’s gotten healthy, found more consistent playing time, and the offense is coming out of its shell (though just barely, lots of work to do), you’re seeing flashes of what made him a second round pick.

Hope it continues because it absolutely needs to. All hands on deck to get the offense where it needs to go.