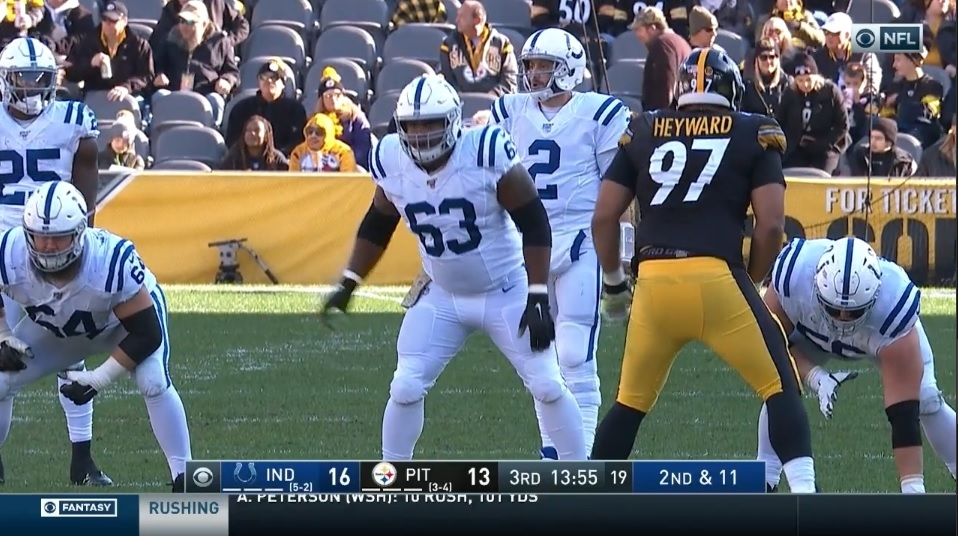 The #1 matchup I circled heading into Sunday’s Steelers/Colts game was Cam Heyward versus LG Quenton Nelson. Two great players going at it in the trenches. I thought it’d be an even, back-and-forth battle.

I was wrong. But in a good way, the best time to be wrong. Heyward won this one in a TKO. Posted some of the clips on Twitter and wanted to share the love here. Because this performance was too good not to include in an article.

First clip. Granted, little tougher for Nelson here with the back cutting back but Heyward avoids getting sealed down and is able to stay square, keep his eyes on the football, and shed Nelson to tackle Marlon Mack for just a one yard gain.

Cam Heyward got the better of Quenton Nelson Sunday. Holds POA on this run, square to the LOS, vision on the football, sheds him and makes the tackle for a gain of just one. #Steelers pic.twitter.com/Ro9ykPwWiI

On the play where Jacoby Brissett was injured, and let’s make clear we never celebrate a player getting hurt, it was Heyward collapsing the pocket. Long-arm bull rush to get into Nelson’s pads and walk him backwards. Yes, at the very end of the play, Heyward did get his hands into Nelson’s facemask but the battle was already over at that point. That wasn’t what caused Nelson to lose here.

Unfortunate Brissett suffered an MCL injury here but Heyward with the long-arm to run Nelson into the pocket. Grown man strength with excellent hand placement to create power. pic.twitter.com/aFL3zVNLcc

Here again is Heyward stacking and shedding Nelson in the run game, spilling the run (forcing the back to bounce outside) and allowing Heyward to converge and make the tackle.

Someone on my timeline told me Quenton Nelson would "annihilate" Cam Heyward this week.

One more for you. 4th down forced fumble by Bud Dupree. Credit to Dupree for beating the left tackle but Heyward again uses his long-arm to collapse the pocket and give the QB no escape lane, letting Dupree finish the play off.

To be fair, an offensive linemen only has to lose a few battles for it to look like a good game. A 90% success rate isn’t the standard for the position. Play well 60 snaps but lose on the 61st and the media will kill you for it. But that isn’t the case here. Heyward repeatedly won in the run and pass game and reminded fans why he’s an elite player.

Nelson is still a great linemen and one of the emerging stars along the league when it comes to the big guys up front. Heyward still managed to make him look totally hopeless on Sunday.