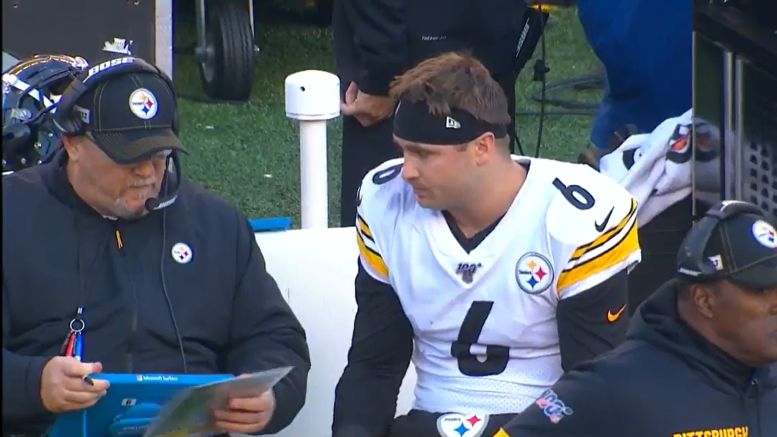 The Pittsburgh Steelers will start rookie quarterback Devlin Hodges on Sunday at home against the Cleveland Browns and on Wednesday it was offensive coordinator Randy Fichtner who was asked to talk about the switch this week from quarterback Mason Rudolph. On the heels of Steelers head coach Mike Tomlin saying on Tuesday that his main expectations from Hodges heading into Sunday’s game is that ‘he not kill us,’ Fichtner was asked on Wednesday if he has any expectations for the rookie quarterback beyond that.

“I don’t know about that,” Fichtner said. “We talked about turnovers a lot over the last several weeks. I mentioned us protecting the ball offensively, and I know we would have had an opportunity to win more games. That’s not spilled milk, that’s not crying after the fact, that’s just the reality, in my opinion, of our offense. And I share that same opinion with our offense. We know we’ve got to protect the ball. He’s giving us a chance to do that and he did it again last week.”

Hodges did indeed not kill the Steelers this past Sunday in the second half against the Cincinnati Bengals after taking over for the benched Rudolph, who had thrown five interceptions in a span of 33 pass attempts in the team’s last two games. On Wednesday Hodges also met the media and he was asked to interpret Tomlin saying the expectation is ‘don’t kill us.’

“It is as simple as taking care of the ball and doing whatever it takes to get the win,” Hodges said.

The Steelers have been getting exceptional play out of their defense this season and that has resulted in them being in nearly every game since being blown out in Week 1 by the New England Patriots. It’s also seemingly resulted in the Steelers young quarterbacks not being asked to be overly aggressive in their style of play for the most part to hopefully prevent turnovers. On Wednesday, Hodges was asked how he goes about balancing being aggressive but also not turning the ball over.

“It just goes back to being prepared and taking what the defense gives you,” Hodges said. “Like you said, our defense is playing really good right now and just not turning the ball over. Obviously, you want to score every drive but at the same time it is about taking care of the ball and doing whatever it takes to get the win.”

The Steelers enter Sunday’s game against the Browns having committed at least one turnover in their last 18 straight games and that’s tied for the seventh longest streak in franchise history since the NFL merger. They have committed 32 total turnovers in those 18 games. The Steelers are 8-1 in their last nine games that they didn’t have a turnover in.

Hopefully Hodges and the rest of the members of the Steelers offense can break that 18-game turnover streak on Sunday against the Browns at Heinz Field. Should that indeed happen, and the Steelers ultimately win the game, Hodges will likely get another opportunity to not kill the Steelers again in Week 14 on the road against the Arizona Cardinals.