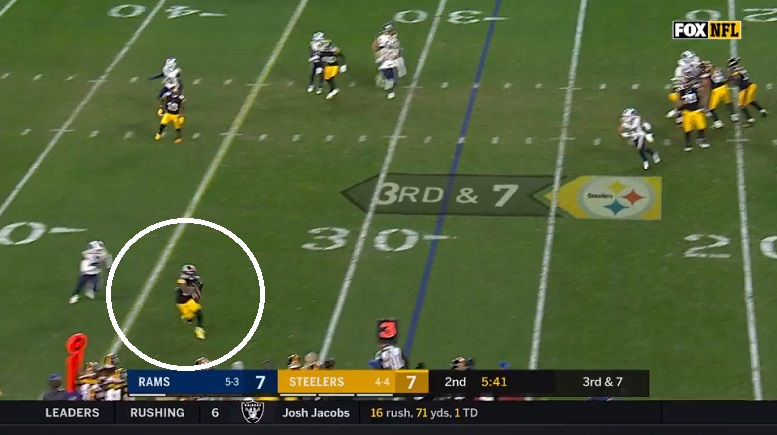 Pittsburgh Steelers quarterback Mason Rudolph took small step in the right direction in his progression in the team’s Sunday home win against the Los Angeles Rams as the second-year player out of Oklahoma State completed 22 of his 38 total pass attempts for 242 yards with a touchdown. While Rudolph’s play Sunday against the Rams was far from perfect, his numbers would have been even better had a few of his pass attempts not been dropped.

While far from official pending viewing the all-22 tape from Sunday’s game, on the surface it appears as though Rudolph had at least six of his pass attempts dropped in the contest and that doesn’t include his first attempt of the game, a short pass to tight end Nick Vannett that resulted in unnecessary roughness penalty by Rams linebacker Troy Reeder.

Steelers wide receiver JuJu Smith-Schuster seemingly had an early-game pass from Rudolph go through his hands while rookie wide receiver Diontae Johnson seemingly had two throws in his direction during the game that should have been caught. Tight end Vance McDonald also had what appeared to be two drops on Sunday and running back Jaylen Samuels seemingly dropped a third down pass from Rudolph in the second quarter that likely would have moved the chains had he caught it.

If the multitude of drops weren’t enough on Sunday, wide receiver James Washington also inexplicable dropped the football for a fumble with 2:26 left in the second quarter following a catch a run of 34 yards to the Rams 35-yard-line.

Drops aren’t new to the Steelers offense through nine games played this season and those sort of miscues need to stop immediately if the unit wants to take another step in properly supporting the outstanding defensive play the team has received so far.

Additionally, for all that Rudolph did well in Sunday’s game against the Rams as a passer, he still needs to be a lot more careful with the football moving forward as he had a  deep second quarter pass to McDonald that probably should have been intercepted by Rams cornerback Troy Hill.

In addition to a poor running game, that has yet to find any consistency so far this season, the continued drops by the eligibles on Sunday are keeping the Steelers offense in a very fragile state as the team enters a crucial stretch of their schedule that includes three games against teams in their AFC North division in the next three weeks.

While Rudolph is seemingly taking baby steps in the right direction as far as his overall progression as an NFL quarterback goes, he’s nowhere near the point where he can continue to overcome dropped passes of his. His eligibles need to start helping out more in games and he needs to continue to work on making sure he dials in his accuracy and decision-making more starting Thursday night on the road against the Cleveland Browns.

We’ll take a closer look at all of these perceived drops from the Steelers Sunday win against the Rams when the all-22 tape from the game is released later Monday night.