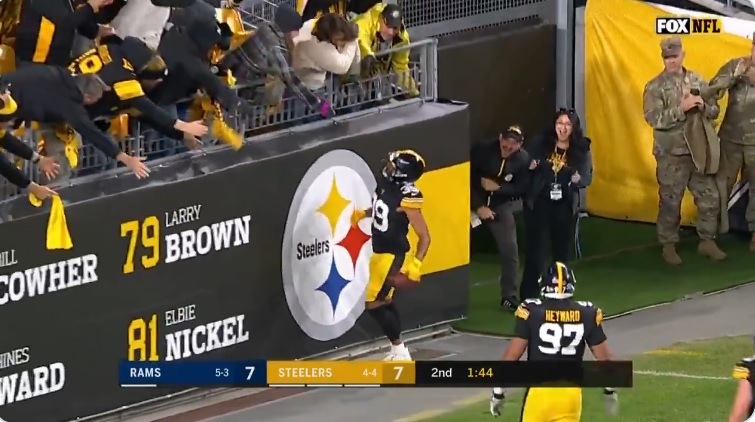 It looked like the Pittsburgh Steelers were over their head (figuratively and literally) at times in this one but backed up by a shutdown defense, the Steelers held on and defeated the Los Angeles Rams 17-12 as they won their fourth game in a row.

The Rams offense scored just three points as the Steelers defense recorded four turnovers, four sacks and a defensive touchdown. The Steelers defense bailed out a sloppy offense numerous times throughout this one, with two key stops at the end to seal the victory.

Jared Goff completed just 22 of 41 passes for 242 yards with no touchdowns and two interceptions as the Steelers defense got to him early and often.

Each team would trade a defensive touchdown in this game with the Rams only touchdown of the game came not from their quarterback but from their defense.

This game did not get off on as the Steelers had planned as they found themselves down 7-0 before the Rams had even touched the ball. A botched snap by Maurkice Pouncey went over the head of Mason Rudolph and was recovered by Dante Fowler who walked into the end zone to put the Rams ahead.

It is now the third consecutive game in a row that the Steelers have turned the ball over on their first drive. The Steelers would find their rhythm shortly after as Rudolph orchestrated an 82-yard drive, a drive in which the quarterback make more than a few big-time throws. No throw was bigger than the three-yard fade pass into the endzone to James Washington to tie this one at seven.

Washington and Rudolph were in the midst of forming a strong connection when the receiver fumbled on what would have been a long catch and run. Ball security has plagued the Steelers this season and the second-year receiver was the latest to fall victim, though his defense would bail him out shortly after.

Who else would it be other than Minkah Fitzpatrick to record a defensive touchdown? A sack by Javon Hargrave caused Jared Goff to cough up the football and Fitzpatrick scooped it and took it 43-yards to the end zone to give the Steelers a 14-7 lead.

Fitzpatrick would finish this game with one interception and a fumble recovery for a touchdown. The Steelers’ safety has now scored touchdowns in back to back weeks and becomes the first Steelers’ player since William Gay to have two defensive touchdowns in a season.

Goff continued to be rattled and confused by the Steelers defense as on the opening drive of the second half, the Rams’ quarterback was intercepted by Joe Haden. It would be the first interception of the season for the veteran cornerback.

The Rams would turn the football over once more, though it was not the fault of Goff, nor backup Blake Bortles who filled in after Goff stepped out for a play but it was punter Johnny Hekker. The Rams punter was intercepted by running back Trey Edmunds on a fake punt attempt.

Unfortunately, the Steelers offense was not able to do much with the gifts from their defense, failing to add any points on both turnovers. As Rudolph and the offense struggled to get anything going, the Rams would begin to breath life back into this game.

A 30-yard field goal by Greg Zuerlein trimmed the Steelers lead to 14-10 and shortly after, the Rams defense would help cut that deficit in half.

Backed up on their own goal line, Rudolph faked a handoff and as he turned to look downfield he was greeted by Aaron Donald who brought him down in the end zone for a safety.

After being silenced since his fumble, Washington and Rudolph got back on track during the final minutes of the game as they connected on three catches for 40 yards during the Steelers’ final drive, putting them in position for a Chris Boswell 33-yard field goal to put the Steelers up 17-12 with just over two minutes to go.

Washington would finish with six catches for 90 yards while Diontae Johnson pitched in 64 receiving yards.

Goff had two chances late to win this one but a good pass break up by Terrell Edmunds and an interception by Fitzpatrick would seal the Rams’ fate as the Steelers sealed this one 17-12.

Even without the likes of Ben Roethlisberger, James Conner or Stephon Tuitt, the Steelers have battled back against all odds and currently find themselves in a tie for the number six seed in the AFC.

The Steelers will not have much time to rest as they will travel to Cleveland to take on the 3-6 Browns on Thursday Night Football. Kickoff is set for 8:20 p.m. EST.