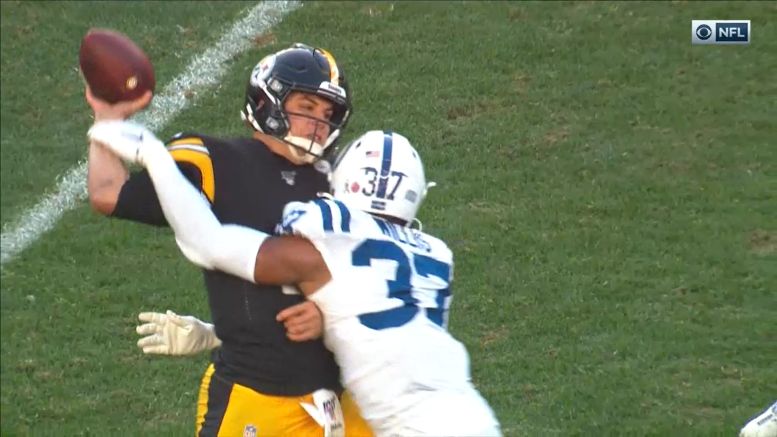 Topic Statement: In order to take the next step, quarterback Mason Rudolph needs to loosen up his mind and tighten up his mechanics.

Explanation: Since entering the starting lineup, Mason Rudolph has had one of the shallowest air yards per pass attempt in the league. He’s been checking down the football quite a bit, leading to Jaylen Samuels catching 13 passes Sunday, the most by a running back in franchise history. He seems hesitant to throw anything but a perfect pass on longer throws, and yet he has also had a tendency to throw off his back foot.

These are the two things holding him back more than anything else. Rudolph is still not at a place where he can fully trust himself and his teammates to make plays that are not aligned just right. We continue to see this week in and week out, and yesterday on the site we highlighted an example of that on the play on which he was sacked in the end zone for a safety, where he could have at least targeted Diontae Johnson. He needs to stop being so afraid of making mistakes and start taking chances.

And making sure his mechanics are sound when he does it, because some of his worst throws of the past two weeks have been when he isn’t aligned in a proper throwing motion. This ties into the above issue as well, of course; they work hand-in-hand.

What we’re seeing is simply the process of maturation on the fly of a young quarterback who isn’t naturally a gunslinger by mentality. He doesn’t have to be Gardner Minshew and throw the ball recklessly all over the field.

What he really needs to do is pick up the pace. He’s taking too long to process and to survey the field, and that’s delaying the time the ball comes out. This only picks up with repetition, so, again, it’s a process.