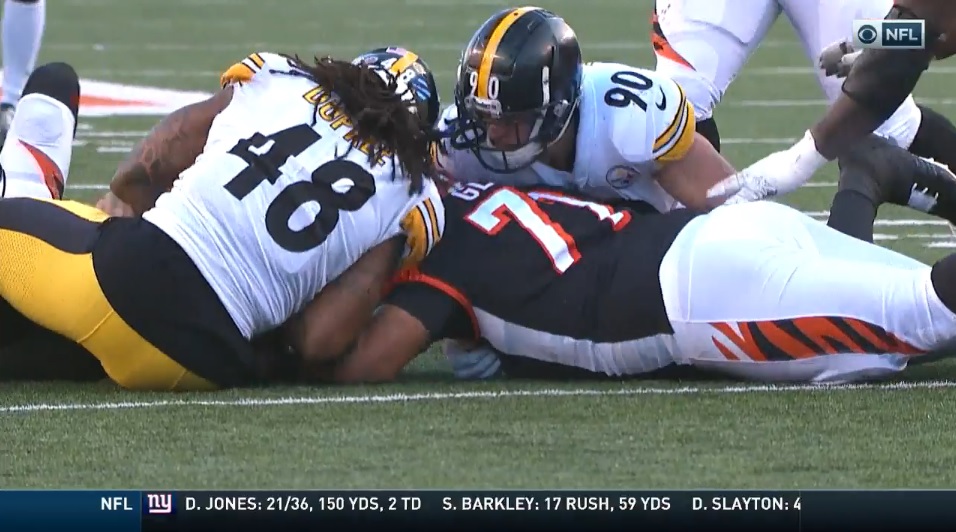 The Pittsburgh Steelers know they can’t just play well defensively. They have to play at a top level. Keep offenses off the scoreboard and set up their own guys for points. That was Bud Dupree’s mentality on his game-clinching sack/fumble of Bengals’ QB Ryan Finley.

“Trying to make big, splash plays for our offense,” he told reporters via the team site after the game. “So we’re going for the ball a lot more. Not just trying to get sacks and be satisfied.”

Dupree’s sack was his 7th of the season, setting a career high. He and TJ Watt had chances to add to that number earlier in the game but saw the downside to being so focused on trying to rip the ball out.

But Dupree made the play when it counted. Some of his best plays have come against the Bengals. In the Week 4 matchup, he also had a strip/sack fumble with Cincy in the red zone. Today’s play set up the final couple plays to run out the clock. It’s more evidence that Dupree will be paid handsomely this offseason. Whether that team is Pittsburgh or someone else remains to be seen.

Sunday he wore down Bengals’ LT Cordy Glenn, playing his first game of the year, to capitalize in the fourth quarter’s final moments. Finding and recovering the ball was almost as impressive as the sack.

“My move had been working all game. I just couldn’t really finish it. In that moment  he held the ball just a tad, I knew I could get there. The DBs did a great job of making him hold it.”

That moment sums up Dupree’s career. Too quiet in the beginning but he’s getting the job done at the end. And he and Watt are making up one of the NFL’s strongest duos.