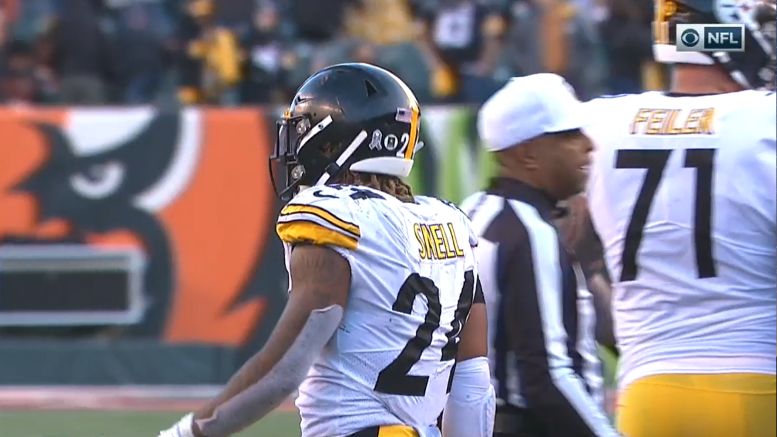 We got served our biggest helping yet of Benny Snell Football yesterday. And it tasted pretty good. The Pittsburgh Steelers rookie functioned as the team’s lead back after missing three games due to a knee injury that required clean-up surgery.

He was a workhorse while a member of the Kentucky Wildcats at the collegiate level. His extensive body of work and endurance was something that attracted the Steelers to him during the pre-draft process, so they were comfortable leaning on him with that type of workload.

And so he got it, finishing the game with a career-high 21 carries, picking up 98 yards on the ground. He also added one reception for five yards, giving his first 100-yard game in terms of yards from scrimmage in his NFL career.

Snell, a fourth-round pick, said in the week leading up to the game that he knew he was ready to get back out there and contribute. When asked after the game how he knew, he said that it came down to practice.

He also credited James Conner, Jaylen Samuels, and fullback Roosevelt Nix, who is on the Reserve/Injured List. “They do a great job of preparing me”, he said. “With me being out, I got an outside look of how the team was, how we worked as an offense, so I felt like I learned a lot, and I was ready”.

Nearly half of Snell’s 21 carries qualified as successful runs for the offense, which is a similar story to the 17-carry, 75-yard outing that he had against the Los Angeles Chargers back in Week Six. He carried the ball just five times the following week while suffering a knee injury, which had him on the shelf until yesterday afternoon.

The rookie now has 49 rushing attempts on the season for 216 yards, averaging 4.4 yards per carry, though he has yet to pick up his first NFL touchdown. If Conner remains out next week, it certainly won’t be surprising to see him get it.

One of the highlights of his performance was simply the ball security he displayed while running, especially during the final couple of minutes of the game, while picking up the first down that allowed them to run out the clock. That’s something head coach Mike Tomlin had been looking for heading into the week, and he got it.

That will only make it even more likely that he continues to see a healthy workload. Even when Conner does get back, he is not going to be at 100 percent with that shoulder injury, so the team will want to manage his workload. They now see in Snell a guy who can help pick up that slack.