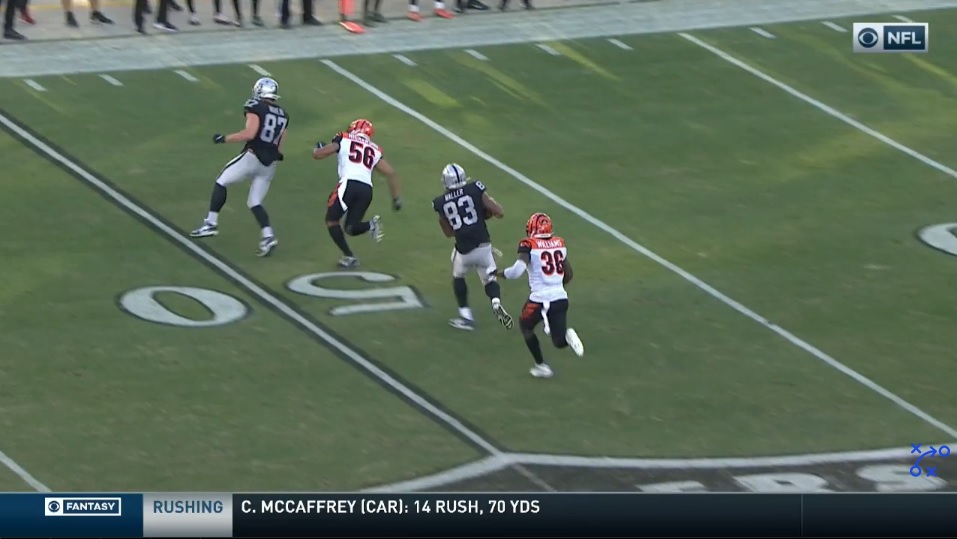 Oakland is deep in their Zone and come out in 12 personnel splitting TE Darren Waller (83) wide left with tight end Foster Moreau (87) as the Y to the left. On the right side they have two WR’s with Zay Jones (12) to the inside and Tyrell Williams to the outside. Cincinnati looks like they’re in a Cover 1 defense with a matchup Zone underneath with Man coverage on Waller.

Jones is going to run a crossing route underneath the linebackers that keeps them from getting depth in their coverage.  Williams is going to press his route to the outside and turn his head to the outside. The head turn gets the deep corner B.W. Webb (23) to freeze for a blink of an eye. He’ll then break to the inside just behind Darqueze Dennard (21) whose eyes are in the backfield and doesn’t feel the receiver breaking behind him. QB Derek Carr (4) is going to uses his eyes to follow Jones which moves the linebackers and opens up space in the middle of the field.  He gives Williams a ball in front and makes an 11 yard gain into a 24 yard gain.

Steelers Scenario – This play is quick and relatively simple. I’d imagine the Steelers would be more likely to run this out of 11 personnel because they don’t have a Waller on their roster. Based on this week’s roster and assuming JuJu Smith-Schuster is out, put Johnson in the slot to run the shallow cross and use Tevin Jones to run the Williams route.

Oakland comes out with 3 tight ends and Jones as the lone WR. The Bengals counter with a 5 man front with two linebackers on the field.

The motion Mark Carrier (85) from the right side of the line of scrimmage to wide left. Dennard follows him signaling the Bengals will likely be in Man Coverage and clearing a defender from that side of the field. Carrier and Jones will run Go routes on the left. Moreau is going to run a 12 yard out route to clear the middle of the field. Waller is matched up with safety Shawn Williams (36) as the tight slot to the left.  Williams is shading to the outside allowing Waller to uses his athleticism to beat him to the inside in a wide open middle of the field for a 32 yard gain.

Steelers Scenario – Again, no Waller on the roster. Can Vance McDonald or Nick Vannett run this route? Yes, but if they can separate from Williams is another question. They could run it from 12 personnel and put James Washington in the Waller role. He wouldn’t likely get a matchup with a safety but should be able to get the space needed to execute.

Oakland is using 11 personnel with a 3 x 1 alignment and the Bengals are countering with their Dime package.

Waller is alone split to the left with a three receiver bunch to the right that includes Hunter Renfrow (13), Williams and Jones lined up from inside to outside. Cincinnati is in Man coverage and the Raiders are going to use a rub and hesitation to attempt to disrupt the defenders.

Williams is going to release immediately taking Dennard with him and will run across the face of William Jackson III (22) who is lined up over Renfrow on his way to an In route.  This causes Dennard and Jackson to collide. Jones will run a shallow cross and is open as another option for Carr. Renfrow is going to hesitate off the line of scrimmage to let Williams do his work, jab to the inside before breaking outside and will run a corner route. With the safety Jesse Bates III (30) dropping down in to the robber role there is no help overt the top. Jackson is able to catch up to Renfrow and will try to undercut what he thinks will be an out route leaving Renfrow open 4 yards behind him for a 27 yard gain.

Steelers Scenario – Yes, this is what they need. Confuse the defense with the routes coming out of the bunch formation.  There are lots of receiver combinations you could run here but from 11 personnel put McDonald in the role of Williams to run the rub route, run Tevin Jones in the Zay Jones route and put Johnson in the role of Renfrow and with a better throw it could be touchdown.