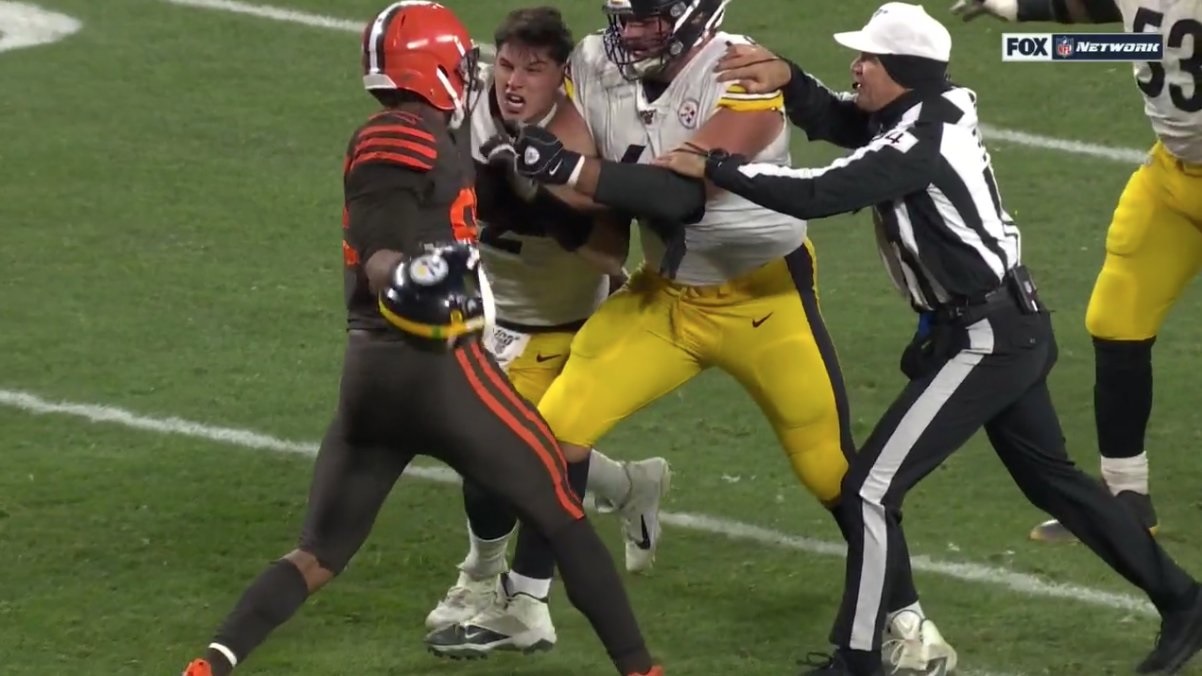 I’m going to be honest with you. I’m finding it hard to even get my thoughts right after watching the way this game ended. As I wrote on Twitter—somewhat graphically—I’ve literally never before with my own eyes ever seen anything like what Myles Garrett did on a field in my life, and I hope I never do again.

With just seconds remaining in a game in which the Cleveland Browns were up by two touchdowns, and on third and 29 from the Pittsburgh Steelers’ own 17, Garrett unnecessarily brought Mason Rudolph to the ground after he had already released the ball.

He proceeded to drive Rudolph into the ground, then pulled him up by his helmet, violently ripped the quarterback’s helmet off, and then took a full swing with the helmet, striking him directly in the head, committing assault in an act that was clearly well outside of the confines of any organized sport.

Not even his teammates could muster up a defense for him, including a somber Baker Mayfield, who was interviewed after the game. “I didn’t see why it started, but it’s inexcusable”, he said after the game. “I don’t care, rivalry or not, we can’t do that. That’s kind of the history of what’s been going on here lately, hurting yourself, and that’s just endangering the other team. It’s inexcusable, he knows that. I hope he does now. It’s tough”. He also told Erin Andrews, “he’s going to get suspended”.

I mean, of course Garrett is going to get suspended. A wide variety of commentators, including current players, former players, scouts, coaches, front office personnel, etc., have chimed in via social media to say that they have never seen anything like this on a football field before.

The Browns know what just happened. I have to wonder what is currently going through Garrett’s mind, and if he even regrets what he did, outside of the fact that he knows he will inevitably be disciplined for it. I certainly don’t think he should be allowed to return to the field this season, and that hasn’t been an unpopular opinion among unbiased experts commenting on the incident.

Garrett was having a fantastic season in 2019, among the league leaders in both sacks and tackles for loss, clearing playing at a Pro Bowl level, if not All-Pro. He was playing another very strong game this night, dominating Alejandro Villanueva at left tackle, even though he failed to register a sack.

And then he committed a crime. Whenever he speaks to the media the next time, what will his response be? I lost my cool? I thought Rudolph was trying to rip my head off?

It’s clear that Garrett was trying to make some kind of statement, going into that play knowing that he was going to do something illegal if he couldn’t get a sack. This was well before he ripped Rudolph’s helmet off and struck him in the head with it, using it as a weapon.

Now it’s up to the league to make a statement of its own about how serious it is about player safety when they just saw one of their best young defensive players use a weapon to physically assault another player on the field in a context completely separate from the game.