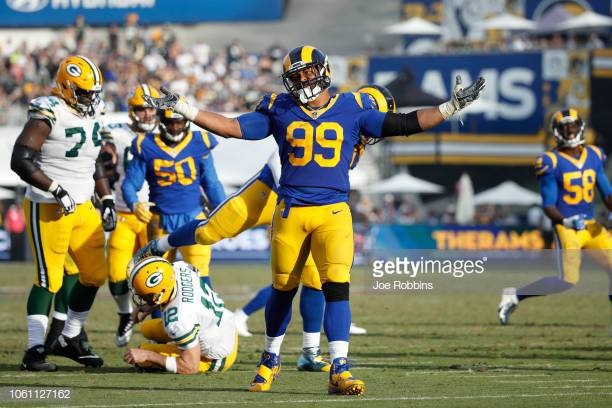 Question: How will the Steelers’ offensive line handle Aaron Donald?

While he may not necessarily be having his best season of his career, statistically speaking, so far in 2019, Aaron Donald remains firmly in the discussion of ‘the best defensive player in all of football’. Some might even put him in the conversation for the best play period.

And the Steelers get their first crack at him since 2015, his second season. In that game, Donald recorded four tackles and a sack, with three tackles for loss, while logging 84 percent of the defensive snaps. He recorded a career-high 69 tackles that year with 11 sacks. He’s coming off a 20.5-sack season in 2018 and currently has five so far this season, with 25 tackles and 11 tackle for loss.

Pittsburgh, of course, counters with a very stout interior, including All-Pros up the middle, center Maurkice Pouncey and right guard David DeCastro. According to Pro Football Focus, DeCastro has been the most efficient guard in pass protection so far this year.

But then there is the left guard position, in flux with Ramon Foster sitting out a second game due to a concussion. B.J. Finney would ordinarily start in his place, but the Steelers are seemingly making a change for unknown reasons.

According to practice reports, they intend to start Matt Feiler at left guard, who has been the Steelers’ right tackle for most of the past two seasons. While Feiler has once started at right guard, and has spent a lot of time in the offseason working along the interior in the past few years, the vast, vast majority of his in-game experience has been at right tackle.

While they focus their attention on Donald, they still have to contend with Michael Brockers, Dante Fowler, and a returning Clay Matthews, complicating the challenge.