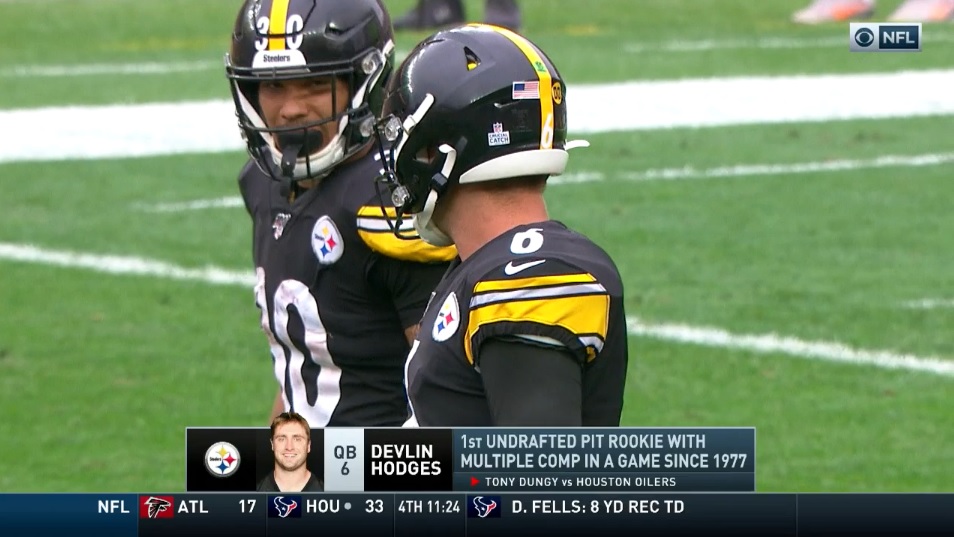 1. Front 4 – The front 4 of the defense was getting a lot of pressure early and just couldn’t finish. Stephon Tuitt and J. Watt each had a chance at a sack at one point. Lamar Jackson was able to slip out of a couple of other near misses. I think it led to the two sacks late in the second quarter by Watt and Vince Williams. With the front 4 able to get pressure early they then started to send and extra man or two on the blitz to close the lanes from which Jackson was escaping.  Good adjustment by Keith Butler.

2. WTF – Whataya Thinking Fichtner – After the success of the Wildcat last week you knew they would push it into the offense this week. You had a direct snap to Jaylen Samuels that he tried to throw (accurately predicted by Dave this week) while retreating and it was intercepted. If you want to try that, I get it. You don’t do it inside your own 20. Do it on the other side of the field. Then on 2nd and 1 inside the 10 yard line they try to run outside with the Wildcat that results in a loss of 5. The timing of when to use these types of plays is terrible.  He should script his first 15 plays and then burn it.

3. James Connor getting no love– A gain of 5, then 8, then 6. All in the first quarter. His next touch came with 6:20 left in Q2. He was averaging nearly 6 yards per carry and you get him 4 touches? The running game has been pretty stagnant so far in the season and they seemed to be able to successfully run it early. They stick with the Wildcat because it was working but don’t do it with the traditional running game.

4.Defensive Mistakes – The defense played well but they shot themselves in the foot way too many times. Three offside penalties (Watt, Williams, Devin Bush), a defensive hold (Mark Barron) and the late hit out of bounds (Tuitt) were several that were frustrating. They were better in the second half getting off the field on third down but to be a great defense they can’t make the silly mistakes. And they are close to being a great defense.

5. Diontae’s Deceleration – We saw it on a couple of times on short area passed last week where Diontae Johnson would come out of his break on a pass route and slow down. We saw it again today on a go route late in the second quarter. The ball was overthrown and Johnson may or may not have had a chance at it if he didn’t slow down. The passing game is all about timing and Johnson needs to quit cold turkey on this habit.

6. Attacking Barron – I need to watch the game again but I got the feeling the Ravens were targeting Barron early in the game. He was in coverage or in the area of several receptions and there was one play in which a tight end seemingly ran right in front of Barron and he never saw it. The coaching staff seems to be high on him but the fans seem to be seeing differently.

7. Matchup is Too Physical – The Steelers and Ravens always seem to ramp up the energy and physicality when they meet and this was no exception. This game is already stressful enough being a divisional game but major injuries always seem to pop up in this matchup.  Mason Rudolph getting knocked out, James Washington’s shoulder, Barron’s hamstring, Tony Jefferson’s knee and Mark Andrews (unknown) all were taken from the game at some point. On Vance McDonalds catch down to the one it looked like he grabbed for his shoulder as well.  Winning divisional games is important but coming out somewhat healthy may be most important.

8. Duck Commander – After the awful injury to Rudolph we got our first look at Devlin Hodges commanding the offense and for all intents and purposes he did well. There was no deer in the headlights look from him. He was 7 of 9 for 68 yards with a 21 yards scramble and most importantly gave the team a chance to win. You honestly don’t want your third string QB to play but the Steelers have to very happy with this showing.

9. I’m confused weekly – I have been watching football for a long time. I played this game in Pop Warner and in high school and the rules seemed pretty straight forward. The NFL has made this game into a labyrinth of video reviews and rule changes that has everyone from the coaching staffs to the average fan throwing their arms skyward and muttering “you’ve got to be kidding me”. I can’t tell you what a catch is. I can’t tell you what is offsides. I can’t tell you what is roughing the passer. That last one, the roughing call against Ola Adeniyi, was a textbook tackle and a flag being thrown that was atrocious. If players can get fined for bad hits then referees should by fined for bad calls.

10. Take the Ball – The captains walk out for the overtime coin flip. The Steelers win the flip. “Hurray! We got the ball.” Nope! We’re going to play defense. Huh? I thought we were having another Jerome Bettis/ Phil Luckett Your defense was just out on the field at the end of regulation and you’re going to throw them right back out there? I should have included this under take number 9 but Mike Tomlin confuses me weekly as well.  Luckily, it didn’t hurt them on that first drive but I thought it was a bad choice in the moment.