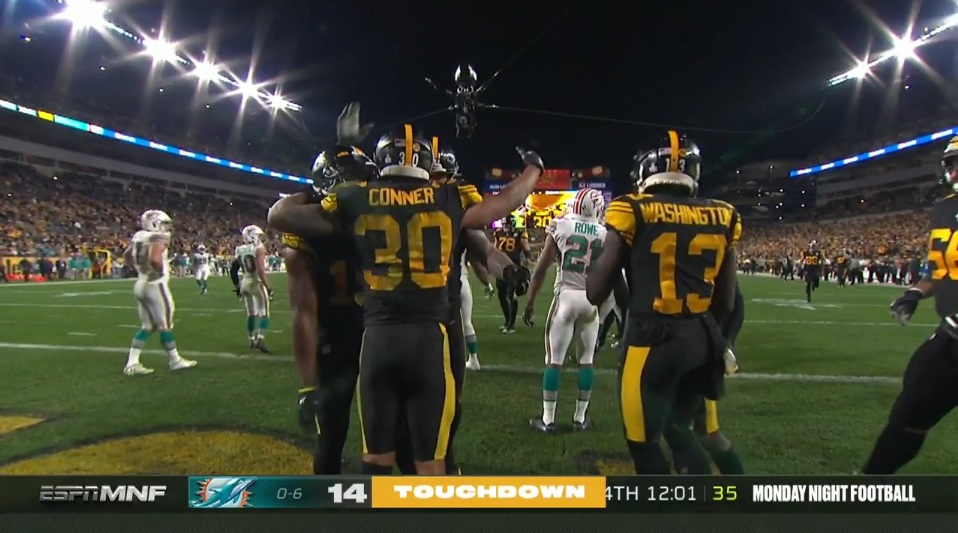 1. Start with a Kickoff – The Steelers tried some strategy on their kickoffs and in theory I like the idea. The execution wasn’t as good as I would have hoped. They idea is to hang the kickoff up in the air and keep it outside the end zone forcing a return by the opposing team.  If you can get the ball high enough and put it in the corner it can work well to limit the return. The first one worked with Chris Boswell kicking it into the right corner and they kept the Dolphins short of the 25. The next three kicks were returned to the 29, 27 and 31. Execution must be better or else its better just to get the touchback.

2. Are you Eligible? – If you are then I have some good news for you. Evidently if you’re a tackle who reports as an eligible receiver this makes the crowd very happy.  Every time I heard “Number 72 has reported as eligible” there was an ever increasing large cheer from the crowd. Maybe they crowds have been doing it for a while but I just noticed it tonight. I don’t know who started this or how it started but I think it’s great.

3. Rusty Rudolph – Mason Rudolph coming back after a concussion and a bye week took some time to get on track. Throughout most of the first half he struggled with his accuracy consistently throwing behind his receivers. He also had two passed batted at the LOS and underthrew JuJu Smith-Schuster down the right sideline. Late in the second quarter there was a false start called on Diontae Johnson but Rudolph didn’t check to see if he was set. Midway through the second Rudolph hit Johnson on an Out route from his own end zone and that started the improvement. The second half he looked much better still missing some open receivers but the overall performance was much improved.

4. Nix and Vince – Vince Williams returned recently and Rosie Nix made his first appearance since week one and that is good news for the Steelers. Yes, I know that’s an obvious statement. These two players are the attitude of the offense and the defense.  They are the fuel that stokes the fire on each side of the ball. Williams at the LOS chirping at the quarterback when he’s calling an audible where, after the QB called out the Mike, I thought I heard him say, “Yeah, that’s me”. Nix leading the way for what was easily James Conner’s best game of the year and wreaking havoc on special teams.  These are the two men you want to go into battle with every week.

5. Illegal Biegel – The referees this year have been put under the microscope again for calls they make and for calls they don’t make. The speed of the NFL makes this a very difficult job. Late in the second quarter with Pittsburgh driving, Vince Biegel came up the middle and hit Rudolph in the knees. Even Biegel knew it as he put his hands up in the “wasn’t me” motion. Consistency is all we ask for across the NFL.  Veteran QB’s would probably get that call but if you’re going to protect one player, protect them all.

6. Challenge Accepted – This news should lead off every sportscast in the nation. For the first time in two years, Mike Tomlin won a challenge. This was a fairly important one on a fourth down so it came at a good time. I’ll be honest. I had gotten to the point where I had hoped someone would hide the red flag from him. A lot of Tomlins challenges I don’t agree with but I guess the law of averages had to turn in his favor at some point.

7. Red Flags and Replays – This has been my opinion for a quite a few years now and I don’t see it changing. Get rid of all challenges. They slow the game down a ridiculous amount and I personally don’t feel they get the play right most of the time.  All touchdowns and all turnovers should be reviewed for accuracy but other than that get rid of them. When you slow everything down frame by frame everything is going to look different. On that note, have the television broadcasts get rid of slow motion replay.  If the referees need to make the calls at full speed shouldn’t we have to form our opinions at full speed as well?

8. Identity Found – The Steelers may have finally settled on what type of team they want to be offensively. We saw improvement before the bye and after 158 yards rushing against Miami that could put a stamp on it. They showed lots of 12 personnel, they used Zach Banner as a tackle eligible tight end (Cheer!) often and with Nix in the mix they may have found themselves. Their next two games are against teams in the middle of the pack in run defense so they may continue it going forward as long as they can get their RB’s healthy.

9. Trust in the Receivers – We talked about it this week that Rudolph had to give his receivers a chance in a one on one situation and accuracy issues aside Rudolph obliged and the receivers responded positively as well. Johnson made a fantastic one handed catch down the right side line but was called for offensive pass interference. Smith-Schuster jumped over a defender and took the ball away for a touchdown. The team and players showed trust in Rudolph when he took over and now he returned the favor. This could bode well for the passing game going forward.

10. Jimmy Pancakes – Throughout the first seven games James Washington has not performed like I had hoped he would. I’m sure he hasn’t performed like he hoped he would either. Sometimes when things aren’t going you’re way you have to make contributions in other areas. On Johnson’s catch and run for a touchdown and on Conner’s touchdown run Washington made an impact putting a defender on their back on each play. Pancake blocks are hard to come by so I wanted to give Washington some love.