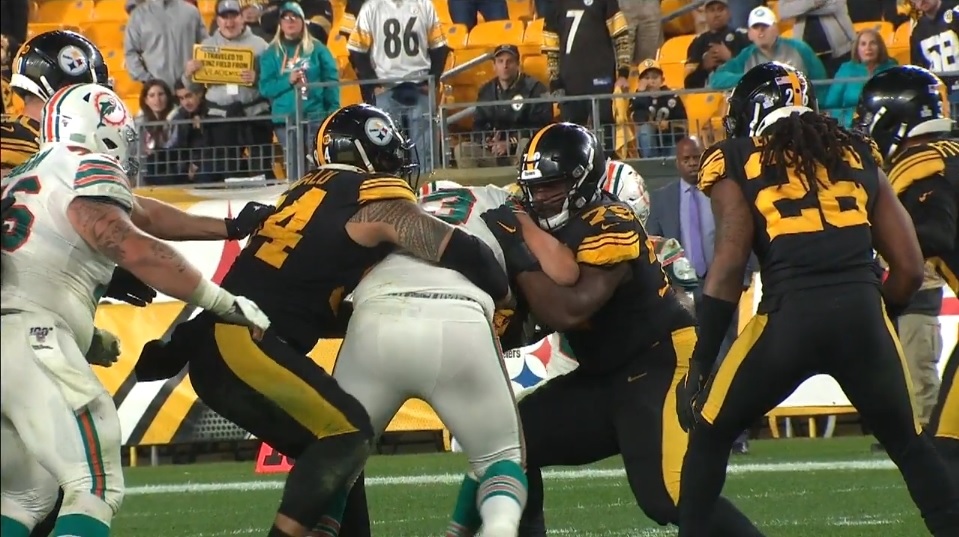 The Pittsburgh Steelers defense is showing strong indications of being as good as any unit that the team has had since at least 2011, if not a year earlier. They certainly have accumulated the requisite talent to put together such a unit, particularly with the offseason and in-season additions of Devin Bush, Minkah Fitzpatrick, Steven Nelson, and Mark Barron.

Through the first six weeks, they were taking the ball away and bringing the quarterback down at rates that were comparable to just about any other defensive unit in the NFL. They continued to display that on Monday night with four sacks and four turnovers, despite it coming in the first game since the season-ending injury suffered by Stephon Tuitt.

The sixth-year defensive lineman was off to the best start of his career before tearing a pectoral muscle early in the game against the Los Angeles Chargers two weeks ago. The coaching staff had the bye week to thoughtfully weigh their options about how to maintain their pressure schemes without such a key cog.

That was unveiled against the Miami Dolphins, and included a multitude of approaches, including but not limited to a sub-package featuring a 1-5-5 defense, with Cameron Heyward as the only lineman and inside linebacker Vince Williams being brought on as an additional, usually fourth, rusher.

Said Mike Tomlin of his unit’s first showing since the injury, “I thought we did a nice job of kind of working to overcome the loss of Stephon Tuitt. You saw us play a number of defensive linemen. I think that was the first game that Isaiah Buggs got a chance to play an extended number of snaps”.

Buggs, the sixth-round rookie, has become the fifth defensive lineman now after not dressing in the first six games. How big of a role he might play in the future will be dictated by what he does in-stadium each week, but they have found other ways to get home.

“You also saw some sub-packages where it was just Cam Heyward in the game and we utilized essentially Vince Williams as that fourth rusher to highlight some of his skills”, Tomlin noted of that new package I mentioned.

“I think that’s really indicative probably of how we move forward when you’re talking about replacing a guy like Stephon”, Tomlin went on. “It’s not only a multi-person job, but it’s probably a multi-positional job, d-linemen and linebackers and so forth. I think we did a good job of kind of establishing a base of what that looks like moving forward”.

The Steelers’ defense is fairly loaded with talent, and having players like Heyward, Javon Hargrave, and T.J. Watt will certainly help to soften the blow of Tuitt’s loss. But this was just one game against a winless team. We will know more about how the defense will stand up without him in the coming weeks than we do now.