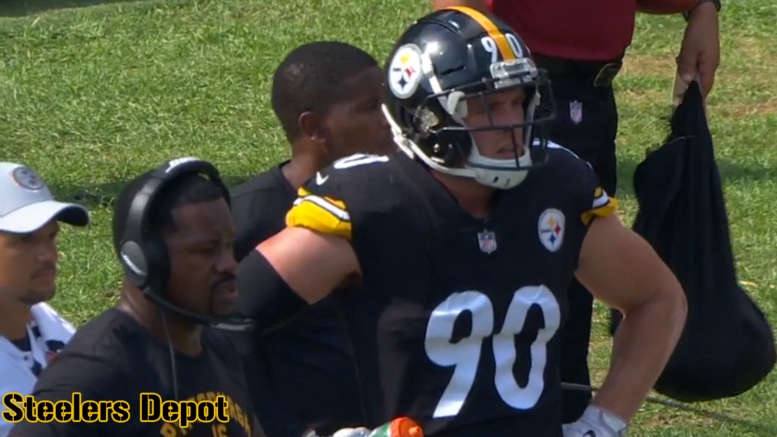 While he technically only missed something like two or three snaps at the end of the game against the Los Angeles Chargers two weeks ago, the Pittsburgh Steelers are gearing up to welcome back T.J. Watt to the lineup. The third-year outside linebacker is on the mend with an abdominal injury, but after finishing the week with a couple of days of full participation in practice, he is trending in the direction of giving it a go.

While Watt did get the chance to be a full-go in practice, full participation at the UPMC Rooney Sports Complex and full participation under the lights at Heinz Field are vastly different things. We don’t know if he can play, and if he does, if he is putting himself at further risk, something he talked about with reporters after practice yesterday.

“Tearing a muscle isn’t fun, but to be able to kind of take it slowly and have the bye week really helped a lot with recovery”, he said, via a video interview on the team’s website from the locker room. “I’m still not where I want to be at all, but if I’m safe enough to be able to go where I’m not gonna reinjure myself, I’ll definitely give it a shot on Monday night”.

Watt has been generally healthy thus far in his career, having only missed on game early on—I believe the third game of his rookie season—due to injury, though he has also dealt with hamstring injuries in each of the past two training camps.

The former first-round pick has been playing at a high level this season, emerging as one of the most consistent pass-rushers in the AFC, if not in all of the NFL. While he is still on four sacks—including a couple of half-sacks—he has consistently generated pressure and has racked up a number of quarterback hits. He also has an interception and a forced fumble, and two fumble recoveries.

He is looking to build off a Pro Bowl season in 2018, during which he registered sacks while recording six forced fumbles, both franchise-highs since the 2010 season. He already has two-thirds of the quarterback hits in six games that he had all of last season, to give one indication of how much more consistently he is getting into the backfield.

Which makes it all the more concerning about his return to the field if done too soon. Getting too eager to get him back on the field could increase the risk of reinjury, and thus more time missed. So it’s important that the medical staff and coaching staff exercise an abundance of caution with his injury status for Monday night against the Miami Dolphins.