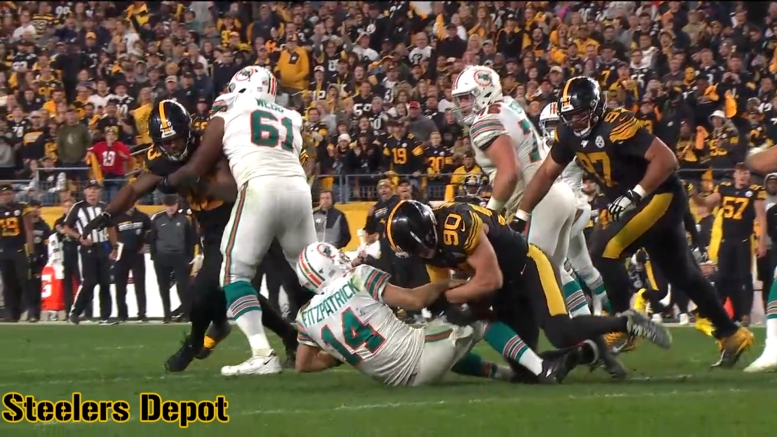 With the NFL season now through its first eight weeks and all teams having had the opportunity to play at least seven games, we are starting to see a number of outlets turning to longitudinal views, both in terms of the future of the season and relative to the typical awards handed out every year.

We also see things like mid-season All-Pro teams, something that Pro Football Focus has been doing for a while. The outlet published its list of All-Pros through the first half of the 2019 season, and one member of the Pittsburgh Steelers was included on the team very prominently.

That would be outside linebacker T.J. Watt, whom they have graded out as their highest edge defender among qualified players in the entire NFL, beating out Khalil Mack. He has both the highest overall grade and pass-rushing grade in their database so far in 2019, picking up right where he left off at the end of last season and then some. I would quote the blurb in the article, but that’s basically what it says.

Through seven games, Watt has 23 tackles with six sacks, an interception, three forced fumbles, and three recovered fumbles. He had one of his best games of the season—two sacks with two forced fumbles—on Monday night against the Miami Dolphins, despite playing through an abdominal injury.

PFF credits Watt with 37 total pressures on the season, which ranks tied for the 10th-most in the league with Joey Bosa and Chandler Jones, but of the 11 players who have as many or more pressures, all of them have played in eight games already.

He is also credited by the outlet with 10 quarterback hits, which is tied (with Matthew Judon) for the second-most in the league, behind only his older brother, J.J. Watt, whose season unfortunately came to a premature end on Sunday when he suffered a torn pectoral muscle.

As you’ll see (or have already seen) in another posting from us on the day, Watt’s step forward this season has as much to do with the mental side of the game as anything else, as, now in his third season, he is able better than ever before to put together a pass-rush plan, setting one move up against another to confuse linemen and take advantage.

Meanwhile, he continues to play the run and drop into coverage well. The runs don’t often seem to come in his direction as many times as they had in the past, though, and I can’t help but wonder if that is not a coincidence. Defenses would be wise not to run to his side of the field.