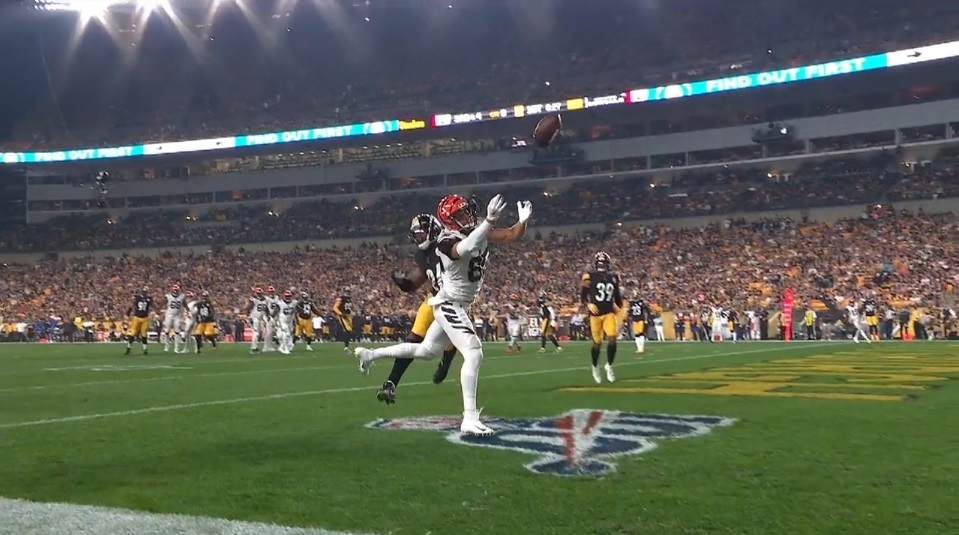 The Pittsburgh Steelers dominated the Cincinnati Bengals Monday night, holding them to just three points, the fewest allowed by Pittsburgh’s defense since 2011. But it got off to a rocky start and almost immediately, Cincy was in position to find the end zone.

Rookie receiver Diontae Johnson fumbled the ball away on the Steelers’ second offensive play of the game, setting the Bengals up at the 15 yard line. But the defense held firm, forcing a three and out and keeping the opposition to just a field goal.

In his Tuesday press conference, Mike Tomlin cited that as one of the moments of the game.

“I thought our ability to stand up against the early adversity really set the stage for the day,” Tomlin told reporters. “Particularly after some of the discussions we’ve had in recent weeks. We turned the ball over twice in the second half of the game versus San Fran and wasn’t able to hold those guys to field goals in those instances. And that’s just what quality defenses do.”

On 1st and 10 following the fumble, Andy Dalton threw incomplete into the end zone, a play well covered by Joe Haden. Dalton found Auden Tate on 2nd down for a five yard pickup followed by a third down incompletion that bounced off Tyler Eifert’s hands. Perhaps a mistake on the Bengals part but the defense got off the field with minimal damage taken. It would be the only points they’d allow all night.

Being better in sudden change was a topic of discussion during the week.

As Tomlin noted, the news wasn’t as positive this time a week ago. Pittsburgh allowed touchdowns after both of the offense’s touchdowns leading to their second half collapse and 24-20 loss. What ailed them last week propelled them to victory Monday. The defense finished with eight sacks, under 200 total yards allowed, and just those three points.