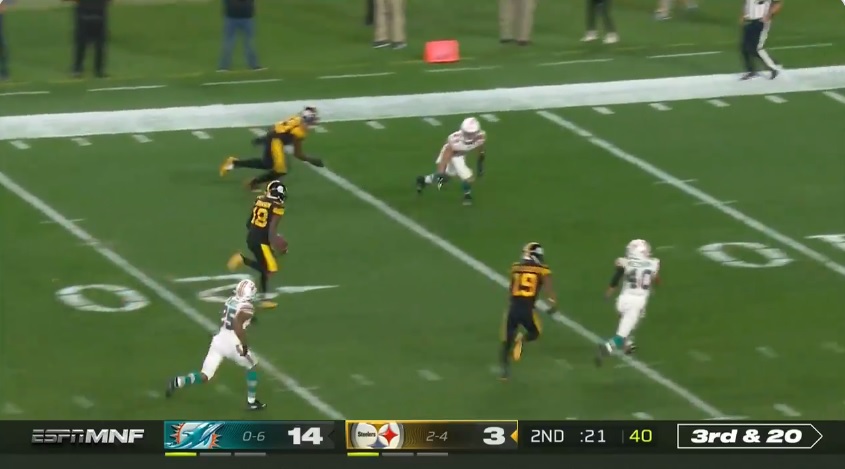 Winners and losers from the Pittsburgh Steelers 27-14 win over the Miami Dolphins Monday night.

JuJu Smith-Schuster: JuJu had the catch of the night with his 34 yard touchdown, plucking a 50/50 ball over the corner to put the Steelers ahead 17-14 in the third quarter. Made tough catches over the middle, moved the sticks, and reminded fans why he’s a #1 wide receiver on this team.

James Washington/Diontae Johnson: Heck, let’s give a tip of to all the receivers tonight. Johnson had a spectacular catch down the right sideline called back on a silly OPI but followed that up with a 45 yard touchdown plays later, even if Miami helped by forgetting to cover on 3rd and 20. Washington’s stats are less impressive, some poor throws from Mason Rudolph early hurt him, but he made up for it with two pancake blocks; one on the Johnson touchdown, the other on Conner’s score. Felt like Hines Ward was out there tonight.

Minkah Fitzpatrick: A DB with two picks? Almost unheard of in Pittsburgh. Granted, the second one acted like a really good Dolphins’ punt but Fitzpatrick’s ball skills are something the Steelers simply haven’t had since Troy Polamalu. With TJ Watt a playmaker up front, Devin Bush in the middle, and Fitzpatrick in the back end, this defense is opportunistic across the board. Finally.

James Conner: Conner might have been the best player on the field tonight. Ran hard downhill, broke tackles, created explosive plays, and even having said all that, his pass protection might have been his best trait tonight. He put the team on his back – again – for an offense that’s still searching for consistency. Let’s just hope the arm/shoulder injury he suffered at the end of the game isn’t serious.

Mike Tomlin: For winning his first challenge since the Eisenhower administration. And it was a big one too, a 4th and 1 reversal that set up Conner’s score to put Pittsburgh up double-digits.

Mike Hilton: Crucial forced fumble on RB Mark Walton with Miami trying to drive in the fourth quarter. He’s the most physical slot corner in the NFL. He’s practically a linebacker. Healthy this year, he’s playing like his usual, excellent self.

TJ Watt: Simply an elite player and it’s not a stretch to believe he could win Defensive Player of the Year at some point in his career. Perhaps even this year, though that’s probably unlikely. He turned it on in the second half and helped seal the win.

Penalties: Specifically, with the offensive-line. I don’t have an official tally besides “too many.” Maurkice Pouncey, Ramon Foster, and David DeCastro were all flagged tonight. Vance McDonald was also called for holding that negated a big run by Conner. Steelers finished the night with nine infractions.

Joe Haden: It isn’t all Haden’s fault but Ryan Fitzpatrick went after him time and time again. Tough as it is to stop big-bodied WR Preston Williams on slant routes with outside leverage, Haden provided little resistance beyond tackling the catch. Would’ve liked to see more help underneath to make those throws tougher on Fitz.