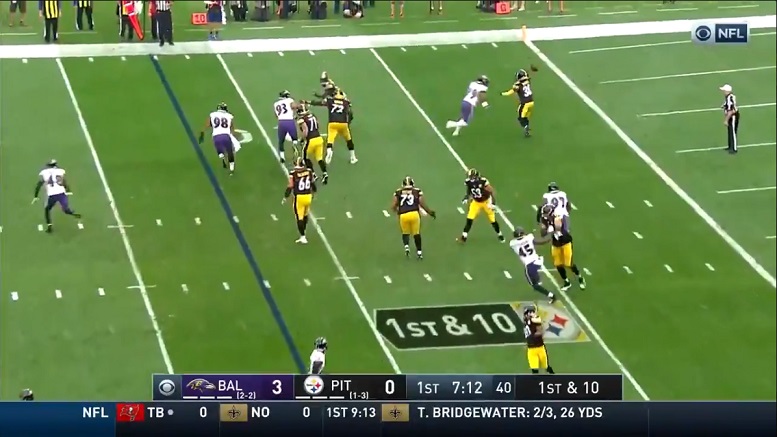 Against the Cincinnati Bengals last Monday night, the Pittsburgh Steelers effectively used the Wildcat that included direct snaps to running back Jaylen Samuels. While that usage of the Wildcat obviously surprised the Bengals defense, Steelers head coach Mike Tomlin pretty much admitted on Tuesday that the Wildcat isn’t a sustainable offensive system moving forward.

“I acknowledge that the Wildcat is somewhat gimmicky, but at the same time, all of us in the National Football League are prepared for it week in and week out, we just don’t get a lot of physical reps when we don’t anticipate it,” Tomlin said on Tuesday. “So from that standpoint, because it’s on video, I’d imagine that Baltimore is going to be prepared for it. But I’d imagine Baltimore’s going to have a certain level of preparedness for it because of the functions and nature of their offense.”

Even after saying what he said on Tuesday, Tomlin and Steelers offensive coordinator Randy Fichtner still decided that some aspects of the Wildcat were sustainable enough to use Sunday in the team’s home game against the Baltimore Ravens. In hindsight, they should have left the Wildcat in the bag against the Ravens like Tomlin hinted they would do on Tuesday.

In total, the Steelers ran the Wildcat three times against the Ravens Sunday at Heinz Field, and it was three times too many.

The first dubious usage of the Wildcat on Sunday by the Steelers offense came during their first offensive play of their second offensive possession, which begin at the Pittsburgh 12-yard-line. On that play, Samuels faked a miss direction handoff to fellow running back James Conner and rolled out to his right with the intent on throwing a short pass to wide receiver James Washington, who was attempting to work his way out into the pattern from the left side of the formation. Ravens linebacker Matthew Judon, however, was not fooled on the play and after first doing a great job of interrupting Washington’s route, he beelined for the unprotected Samuels and the running back threw an ill-advised pass that was intercepted.

What was the max that could’ve been gained with this Wildcat pass so deep in the Steelers end of the field? 3 yards? 7 yards? 10 yards? The payoff just didn’t warrant the risk. I was all for using Samuels as part of sort of trick pass play Sunday against the Ravens, but not out of the Wildcat and deep in the Steelers own end. If you’re going to try something that includes a non-quarterback throwing a pass, make sure the trick play has a huge payoff. The Ravens capitalized on the turnover by scoring their first touchdown on a short field so put those 7-points on Tomlin and Fichtner and not the Steelers defense.

Fichtner and Tomlin didn’t learn their lesson, however, as the Wildcat was used a second time in the second quarter. This time, however, the direct snap to Samuels happened on a 2nd and 1 play from the Ravens 7-yard-line and with the Steelers looking to tie the game on a short field following an interception by the team’s defense. On this play, the Steelers attempted to run the power to the left side with Samuels carrying the football following him faking another handoff to Conner. The Ravens defense wasn’t fooled once again and Samuels was ultimately tackled for a loss of 5-yrads. On the next play, quarterback Mason Rudolph was sacked, and the Steelers had to settle for a short field goal.

After two Wildcat fails, Fichtner figured the third time might be the charm. Well, it wasn’t.

On a 1st and 10 play from the Ravens 19-yard-line with 5:22 left in the third quarter, the Steelers ran a trick reverse to wide receiver Johnny Holton following a direct snap to Samuels and a flip forward to wide receiver Diontae Johnson. Holton cut back inside around the left edge when he probably should’ve stayed outside, and he was finally tackled for a gain of just 4-yards. Fortunately for the Steelers, the offense was able to score a touchdown two plays later.

In total, the three Wildcat plays run Sunday by the Steelers offense netted a loss of one yard and crucial interception. Tomlin warned that the Wildcat wasn’t sustainable, and he was right. Why he and Fichtner decided to use it Sunday against the Ravens is anyone’s guess and especially after seeing what happened the first time the offense ran it.