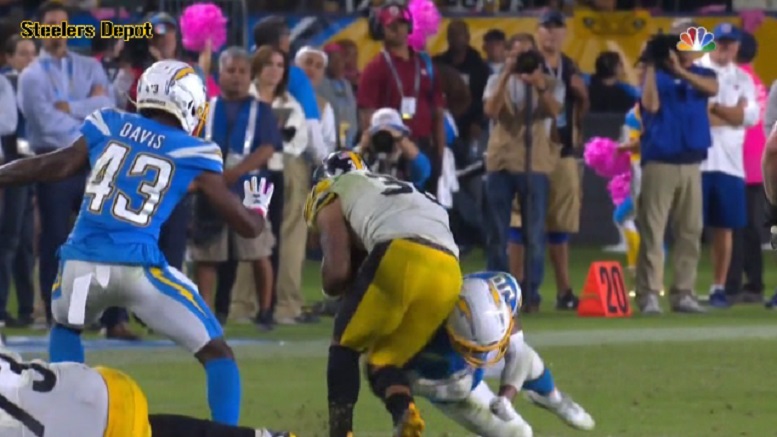 Pittsburgh Steelers running back James Conner got dinged up a few times during the second half of the team’s Sunday night game against the Los Angeles Chargers but he said Monday evening that he expects to be able to play against the Miami Dolphins in Week 8 after he gets some much-needed rest during the team’s upcoming bye week that officially begins on Tuesday.

Immediately after the Steelers Sunday night game was over with, head coach Mike Tomlin said during his press conference that Conner suffered a quad injury during the contest and that he would need further evaluation. Conner detailed when that quad injury happened Monday night during his weekly interview on 93.7 The Fan.

“It happened like in the third quarter,” Conner said. “Just took a shot to the quad. I feel a little bit better. Kind of bruised up, but good thing we’ve got the bye week, I’ll be able to heel up and be ready to go for the next week.”

Conner was unable to return to the game after taking that shot to the quad late in the third quarter after catching a short pass from quarterback Devlin Hodges on a 3rd and 13 play. You can see that play below along with the shot to the quad that Conner took from Chargers safety Roderic Teamer.

“But it happened by just taking a shot to the quad and it just felt like I really couldn’t accelerate off of it and it was real, real painful,” Conner said Monday night. “And at that point Benny [Snell Jr.] was running really hard and I knew that probably the best decision was to let him go. He had a hot hand and I really didn’t feel like I could go. So, that’s kind of where I’m at with it now.”

Conner, who registered a season-high 129 total yards from scrimmage Sunday night against the Chargers via seven receptions for 78 yards and 16 carries for 41 yards, scored both Steelers offensive touchdowns in the contest. The running back also took a hard hit from Chargers veteran linebacker Thomas Davis earlier in the quarter that he admitted knocked the wind out of him. After leaving the field following that hit by Davis, Conner returned to action several plays later.

“It hurt, yeah it hurt,” Conner said Monday night of the hit he received from Davis.

Conner has had a hard time staying fully healthy since being selected by the Steelers in the third round of the 2017 NFL Draft. Last season he missed three and a half games with an ankle injury and the last two games of his rookie 2017 season due to a knee injury. Even so, it sounds like Conner will be heeled up enough to start the Monday night game against the Dolphins in Week 8.

Conner enters the team’s bye week with 235 rushing yards and three touchdowns on 74 total carries. He also leads the Steelers in receptions with 26 for 231 yards and another two touchdowns.