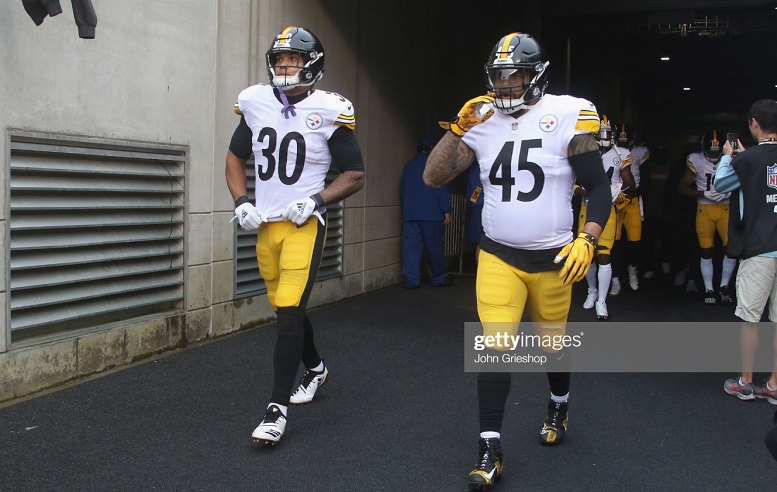 After missing the Pittsburgh Steelers last five games with a knee injury suffered in Week 1, Roosevelt Nix is currently expected to return to action for the team’s Monday night home game against the Miami Dolphins. While Nix is probably the one most excited about potentially getting back on the field Monday, running back James Conner isn’t far behind him.

During his Wednesday session with the media, Conner, who was named the Steelers 2019 Ed Block Courage Award winner earlier in the day, was asked what it means to him to get Nix back for the Monday night game against the Dolphins.

“Man, I’m really excited about that the most,” Conner said. “Pro Bowl fullback. Just him leading the way, him going headfirst into people, man, I need that. We need him back. The whole offense is happy to have him back. Just his presence out there alone and his special teams game. You know he blocks punts, he’s the first one down the field making tackles on kickoffs. So, he’s playmaker, so happy about that.”

While Nix did dress and play in the Steelers Week 1 loss to the New England Patriots, he failed to register an offensive snap in that contest and that’s probably because he suffered his knee injury at some point during it. The Steelers running game hasn’t been great so far this season as run play success rates for the team’s three running backs, Conner, Jaylen Samuels and Benny Snell Jr., have been way below 50 percent. The Steelers offense has also missed the presence of Nix in short-yardage situations as only four of nine total running back attempts on either third or fourth down have been successful.

The Steelers will probably attempt to lean a little more on their running game than usual the remainder of this season with second-year quarterback Mason Rudolph continuing to fill in for shelved injured starter Ben Roethlisberger. The offense usually likes to run a lot of power running plays when Nix is on the field and Conner has certainly had his fair share of success carrying the football on such plays when he has his fullback on the field.

Nix is probably champing at the bit to hit some defensive players Monday night, so chances are good he ultimately plays at least 15 offensive snaps against the Dolphins, and maybe a lot more depending on how game situations go.

Nix, as Conner made sure to point out on Wednesday, is also a very good special teams player and a core unit one at that. Having him back on the field Monday night in that phase of the game certainly will be a sight for sore eyes.

Nix reportedly practiced on Monday and it will be interesting to see if he’s even listed on the team’s first official injury report of Week 8 when it’s released Thursday afternoon.