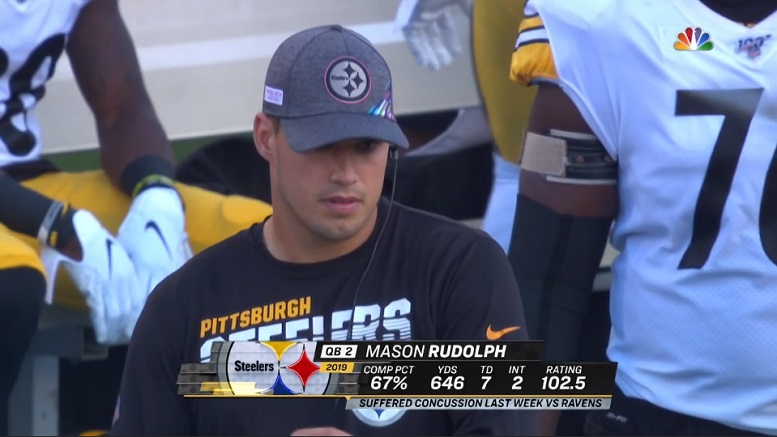 Wednesday evening Pittsburgh Steelers quarterback Mason Rudolph was cleared by an independent neurological consultant to fully return to action following the team’s bye weekend, according to Burt Lauten. That means that Rudolph is no longer in the concussion protocol. He had been in protocol ever since suffering a hit from Baltimore Ravens safety Earl Thomas in the third quarter of the team’s Week 5 Sunday home game.

This afternoon #Steelers QB Mason Rudolph was cleared by an independent neurological consultant to fully return to action following the team’s bye weekend. Rudolph is no longer in the concussion protocol.

With Rudolph now out of concussion protocol, he’ll be expected to practice fully next Monday when the team returns from their bye week and barring any sort f setbacks he’ll start the Week 8 Monday night home game against the Miami Dolphins.

“Yes, if that makes you guys feel good,” Steelers head coach Mike Tomlin said Wednesday during his press conference when asked if Rudolph will return to being the team’s starting quarterback once cleared medically from his concussion.

Tomlin was later foolishly asked on Wednesday if the draft capital the Steelers have invested in Rudolph played any part in the decision to keep him as the starting quarterback and if he thinks the second-year Oklahoma State product has done enough to this point to earn the right to resume starting.

“Seriously, guys, that guy is our quarterback when he clears the protocol and it’s as simple as that,” Tomlin said. “Appreciate the efforts of Duck [Devlin Hodges] and so forth, but as soon as he’s ready to go, he’s ready to go.

With Rudolph out of action this past Sunday night against the Los Angeles Chargers, rookie undrafted free agent quarterback Devlin Hodges was called upon to make his first career start. The Samford product finished the game having completed 15 of his 20 total pass attempts for 132 yards with one touchdown and one interception and at one point during the contest completed nine consecutive pass attempts. On Wednesday, Tomlin was asked to assess Hodges play against the Chargers now that several days have passed.

“He didn’t kill us, you know, and that’s what you need from young quarterbacks,” Tomin said. “In general he took care of the ball he made the plays he needed to make, but we were thoughtful about the positions that we put him in. We converted three or four possession downs via the run. Many others we dumped off in the flat and allow James Conner to win them after the catch. We did the things that we needed to do to secure a victory in that instance.”

Hodges will now likely go back to being Rudolph’s backup and we’ll have to see if the team’s other quarterback currently on the 53-man roster, Paxton Lynch, winds up staying on the 53. Lynch was promoted to the Steelers 53-man roster from the practice squad this past Friday after Rudolph was ruled out for the Sunday night game against the Chargers. Lynch was dressed as the team’s backup quarterback behind Hodges Sunday night.