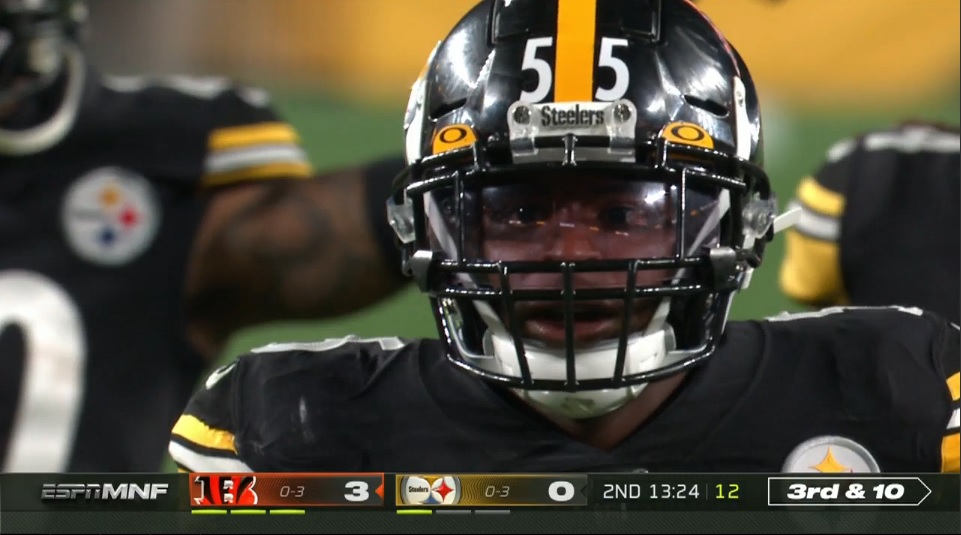 As we like to do at every quarter of the season, we like to comb through our Pittsburgh Steelers’ defensive charting to see what trends stick out. Recapping what’s gone down through the first four weeks of the year.

– This is out of 289 snaps, excluding “no plays” and kneeldowns. That puts them on pace for 1156 in 2019, which would be the most in at least the past five years. For whatever that’s worth.

– Your personnel groups for the first month:

– Dime was used liberally the first two games – 15.9% – but it hasn’t been used once the last two weeks despite ample chances to do so.

– Keith Butler is blitzing 35.6% of the time. He finished last year at a career high 44.1%. This current rate, if it remained the same the rest of the season (it won’t), would be his third highest rate since becoming DC.

He is sending 5+ rushers 36.4% of the time. Reason why that’s higher is because of the increase in base defense where you can send five (three linemen, two OLBs) without it being considered a blitz. Butler sent 5+ 36% of the time a year ago so that number is staying on course.

Snaps per pressure to better put these numbers in context. Lower the number, the better.

Hargrave’s numbers don’t look good here, I know, but I promise his tape is much better. And he’s been very efficient about getting to the QB and maximizing his chances. That’s what happened last year too. Tuitt having a great year and basically cut in half his 2018 pressure rate (21.7). And already exactly halfway to last year’s total pressures (22). Put it this way. He alone has more pressures than the rest of the d-line combined.

Adeniyi has a very small pass rush sample size. Just 11 snaps. So don’t make too much out of it.

– Drop/coverage rate. Just doing this for Watt and Dupree because the others just haven’t played enough.

Almost identical numbers and even more of a reduction last year where Watt dropped just 19.3% of the time while Dupree did so 18.3%. Focus on letting these guys get after the QB. Remember, in his rookie year, Watt dropped into coverage 1/3 of the time.

Coverage/target numbers from the ILBs. Just looking at Barron and Bush because they’re the only ones with enough of a sample size.

If you’re wondering, Haden was credited with the interception for the deflection against the 49ers Fitzpatrick picked off. Haden was the player targeted and made the play so he gets the credit in our charting, not Fitzpatrick. Point of clarification there.

– Hilton and Edmunds each have two pressures.