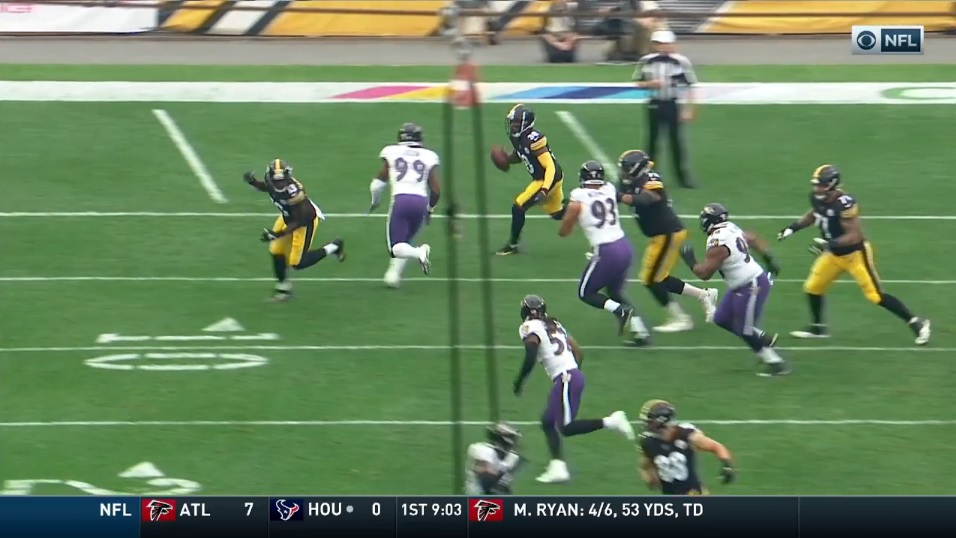 So close to a win. So close.

Let’s get a little weird instead.

– Starting with the score. Another close Pittsburgh Steelers vs Baltimore Ravens game. That’s been the story of the Steelers’ season. Aside from the Week 1 blowout defeat, Pittsburgh has lost their other three games by a combined nine points. Two points to Seattle, four to San Francisco, and a field goal Sunday afternoon.

– Making it all the more frustrating is the fact this team keeps winning the turnover battle. 3-2 today in favor of the black and gold.

Pittsburgh has won the TO battle four times in 2019. They’re 1-3 in those games.

Should that happen again one more time, and odds are it will considering it’s only Week 5, it’ll be the first time they’ve lost four games where they’ve won the TO battle since 1999.

– Pittsburgh’s defense sure has done a great job taking the ball away. They’re up to 12 takeaways this season, equaling what they did in the first 12 games of 2018.

– They also have 19 sacks, giving them exactly that many in the first five weeks of back to back years. Last year, they finished with 56. No other defense has done that over the last two years. Pittsburgh’s the first defense to have that many in consecutive seasons since the 2006-2007 Philadelphia Eagles.

– Offensively, they’re still a mess on possession downs. 3/9 against the Ravens which is, remarkably, an improvement over where they were at heading into the game (27%).

– Devlin Hodges went 7/9 in his NFL debut. He’s the first Steelers’ rookie UDFA quarterback to attempt a pass in a game since Pete Gonzalez in 1999, who hit Hines Ward for an 8 yard pickup in a blowout 43-0 victory. It was the Browns’ first game back as a team. We wrote about that game last year and here’s a look at the play.

Devlin Hodges is the first Steelers rookie UDFA QB to attempt a pass since Pete Gonzalez in 1999. Gonzalez had this completion for 8 yards. pic.twitter.com/du1lGX7Kxy

– Hodges is the first rookie UDFA Steeler to complete 5+ passes in a game since Kent Nix in 1967. Nix started nine games that year for Pittsburgh, going 3-6 as the team’s starter.

– Jaylen Samuels threw an interception today. Since 2000, only three non Steelers QBs have thrown interceptions. Jerome Bettis in 2000, Santonio Holmes in 2010 and most recently, Antonio Brown in 2012. Brown’s pick, ironically enough, also came against the Ravens. Pittsburgh won that game by a field unlike yesterday, where they lost by three.

– Pittsburgh, again, got destroyed in the time of possession battle. The Ravens had the ball for exactly 39 minutes Sunday. That’s the longest any team has had it against the Steelers since the St. Louis Rams controlled the ball for 40:00 in a 33-21 victory in 2003.