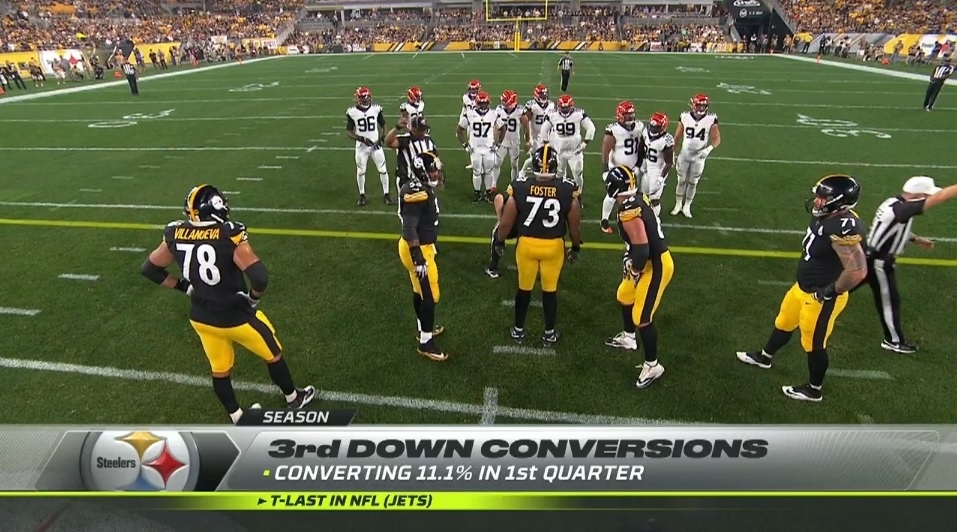 The Pittsburgh Steelers are bad on third down. Every fan knows that. Players and coaches have harped on issues on possession downs and through three weeks, they rank 30th overall on third down.

Dig into the numbers more and – somehow – it gets worse. Not only are the Steelers struggling overall on third down, they’re struggling even in the most makeable situations.

Ten times this year, the Steelers have faced 3rd 1, 3rd and 2, 4th and 1, or 4th and 2. Short-yardage situations. Tailor made for the offense to move the sticks.

Except when you look at the numbers. Pittsburgh is just 30% on those plays, 3/10, a conversion rate that’s 31st in football. Only the Green Bay Packers, who are 1/7, are worse.

The issues have popped up since Week 1 against New England and remained a problem even in last week’s blowout victory, failing on consecutive 3rd and 4th and 1 chances against the Cincinnati Bengals. We broke down those problems earlier in the week.

Of those three conversions the Steelers have managed to pick up, one came in the waning minutes of the loss to the Patriots, a six yard gain to Vance McDonald with 36 seconds remaining.

To put their woes in context, the Steelers were among football’s best in short yardage conversions a year ago. In 2018, they finished 7th at nearly 70%, converting 34 of 49 chances. If you’re wondering, the best in football in 2019 are the Indianapolis Colts at 93%, moving the sticks on 13 of their 14 opportunities.

If Pittsburgh can’t iron out their issues there, it’ll be hard to envision them improving their overall 3rd down woes. Taking a step back and looking at all third downs, the Steelers are in favorable situations too. They’re 7th in yards to go on third down yet rank almost dead last in conversions.

Until this offense shows they can win on possession downs, it will be a unit that’ll struggle mightily. Pittsburgh was able to use a brand new gameplan to roll against the Bengals but they won’t be able to run the Wildcat to win the North. It won’t even work this Sunday against the Baltimore Ravens.