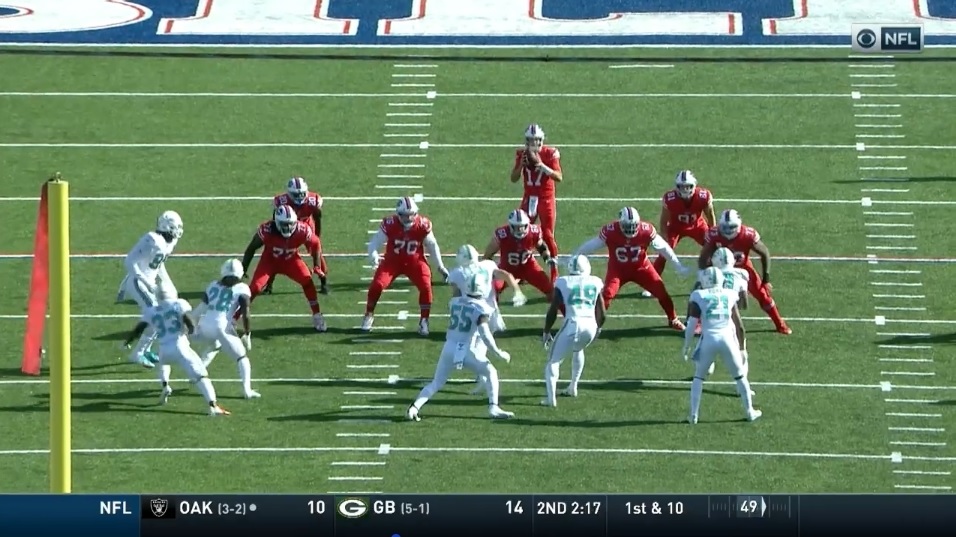 Today, our overview of the Miami Dolphins’ defense.

Like most elements of this winless team, they haven’t been very good in this area. Putting the numbers in context though make them look a little better. They are 31st in yards per game allowed, over 160, but some of that can be chalked up to teams getting monster leads and running the ball out in the second half. From a yards per carry standpoint, they’re a slightly more respectable 22nd, allowing 4.7 yards per carry. Still, not a number any defense would aim for.

They have allowed 25 runs of 10+ yards, 28th in football. They’ve given up at least one in five of their six games, including four last game to the Buffalo Bills.

If I’m the Steelers, I’m sticking with power runs and wouldn’t be afraid to bounce some stuff outside. Their interior line has some talent and size, led by 2019 1st round pick Christian Wilkins, but you can get the ball on the perimeter with a guard pulling. Power is something very much in Pittsburgh’s wheelhouse. Good gameplanning is about combining your strengths (what’s in your playbook, what you do well with the personnel you have) coupled with the opponent schematic/personnel weaknesses.

It’s a 3-4 front but they’re capable of being multiple, just as the Patriots have been in season’s past. Remember, Miami’s head coach is Brian Flores, the former DC of New England before getting hired this past offseason.

Overall defensively, things have calmed down after a dreadful beginning.

And the Dolphins’ defense isn’t responsible for all the pick six’s, short fields, or special teams scores, like Buffalo’s onside kick touchdown to seal last week’s dub. If you accounted for that, the defensive output would look even better, but I understand you could apply that standard to any team.

Couple other stats. Areas where they predictably suck. 28th on third down defense (47% offensive conversion rate), and dead last in red zone defense, allowing TDs about 70% of the time. Miami is 20th in yards per game allowed, 417.3, and the only reason they aren’t dead last is likely due to the mercy opponents have showed in the second half of those early-season laughers.

More ugly numbers. Last in yards per attempt allowed (9.4), tied 29th in pass TDs (16), and tied last for fewest INTs (1 – CB Bobby McCain). Also 31st in sacks with only seven. Only players with more than one are Taco Charlton and Vince Biegel. They’ve also given up 27 passes of 20+ yards, tied for 23rd most in football.

Like I said above, this is a defense that wants to mimic what New England does. Means you get a lot of man coverage. Clearly, the Dolphins have worse personnel and are much less effective of it but expect to see plenty of man-free and robber concepts. They are getting a little healthier in the secondary, assuming CB Xavien Howard can suit up, which will help.

Will get into their amoeba defense on 3rd down. Lot of moving pieces, guys with their hand up, stressing protection. They can bring the heat or drop eight into coverage. They also love mugging the A gaps and blitzing the LB opposite the way the center turns.

Here’s an example of the Patriots’ “rain” blitz from a 2015 Grantland article penned by Chris Brown, one of the best X’s and O’s minds in the football internet community. 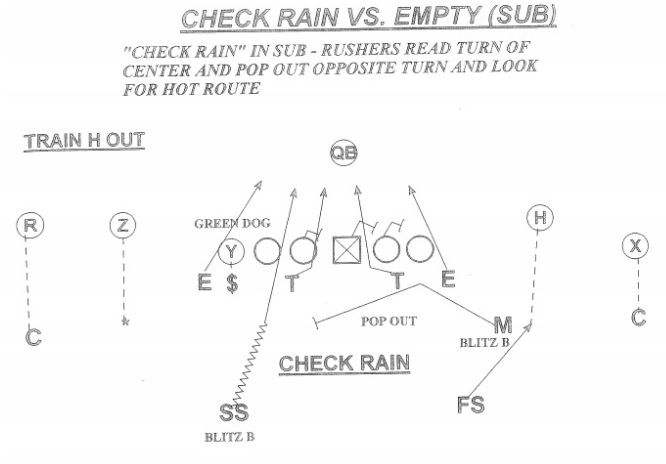 And here’s an example on tape. Both LBs end up rushing but you get the idea of how they’d attack it.

With the bye week now ending and the Steelers getting back to work in Pittsburgh, they have to now buckle down and face a Miami Dolphins squad that is obviously winless on the season, but that does not mean they can take them lightly by any means. The Steelers face their nemesis, the notorious trap game.

As for this Dolphins defense, this defense has a ton of holes on it, just like the entire team. The Dolphins are in the middle of a massive rebuild and even got rid of now Steeler Minkah Fitzpatrick to satisfy the need for more draft capital as they try to turn around the fortunes of their franchise, which has been stuck in mediocrity since Dan Marino left town.

Upfront, the Dolphins have young pieces all around the front, with the real exception being nose tackle John Jenkins, who has been around this league long enough to know how to be a one-gap run stopper with great gap integrity and football IQ. He won’t destroy your lineman at the point of attack, but he can control that and make tackles to stop runs from going anywhere if there is no push-up front. Davon Godchaux has given the Dolphins nothing to be excited about. He’s a run-stuffing DT that can get pushed out of his gap and doesn’t flash much in the pass-rushing department. Rookie Christian Wilkins got ejected last week for throwing a punch, but fans know how talented this guy is if they watched tape of him at Clemson. Explosive first step, violent hands, and a vast arsenal of moves make him a dangerous guy to watch upfront. He’s really solid.

Out of nowhere, the Cowboys released Taco Charlton, and since coming onto the Dolphins, Charlton has already recorded 3 sacks and 9 pressures. He has been more productive more than he has ever been in this league. The Dolphins will drop him out, use him at DE, or even slide him inside to tackle. He is a guy to watch because even though he does not have eye-popping athletic traits, Charlton has been schemed to perfection in Miami as they take advantage of the technical side of his game.

In the linebacker corps, Sam Eguavoen, a former CFL ILB, has gotten significant snaps at OLB. Eguavoen is a hybrid pass rusher and off-ball LB, and his athleticism and IQ are the main reasons why he can pull this off. He has not been a huge factor in games thus far, though, and can be exploited in coverage up the seam. Former first-round Charles Harris is still there, and unfortunately, he has been nothing special. A lack of bend and lackluster athleticism have limited him severely. Vince Biegel gets in there sometimes and he is a sure tackler who can be counted on to read his keys with ease. Good depth piece to have. Jerome Baker was once thought to be a key piece to their rebuild, and while he has been all over the field thus far, missed tackles and a lack of growth mentality are certainly question marks when it comes to him.

Former Ohio State standout Raekwon McMillian is still with the Dolphins and while he has progressed to be a decent player, especially with his athleticism and ability to get downhill in a hurry, he still plays too haphazardly and can get burnt because of it. Misdirection is one way the Steelers can exploit the second level of this defense tomorrow.

Now, the secondary is a different beast altogether, especially with the aforementioned Minkah Fitzpatrick now gone and Reshad Jones out with an injury. Eric Rowe will rotate over to play safety, much like he did last week. Rowe is used to being versatile, but he has no ball skills. Still, he has the range needed to play back there. Xavien Howard is still a top corner in this league and a big playmaker no matter how you slice it. JuJu Smith-Schuster will have his hands full with him if he’s active. Nik Needham has been playing his fair share of snaps as well outside. He is an undrafted free agent, and his lack of athleticism hurts him, but he has a knack for finding the football. Ken Webster is a lengthy, long-press corner who is raw and has to develop, so his deficiencies are exploitable.

Bobby McCain is the unsung hero of this secondary. The youngster plays with an intensity that can rub off on everyone in this secondary. He’s fast-flowing to the football, he’s got great ball skills, and he can play safety or creep down into the slot and be an excellent slot corner. If there is one guy to watch outside of Howard tomorrow, McCain is that guy.