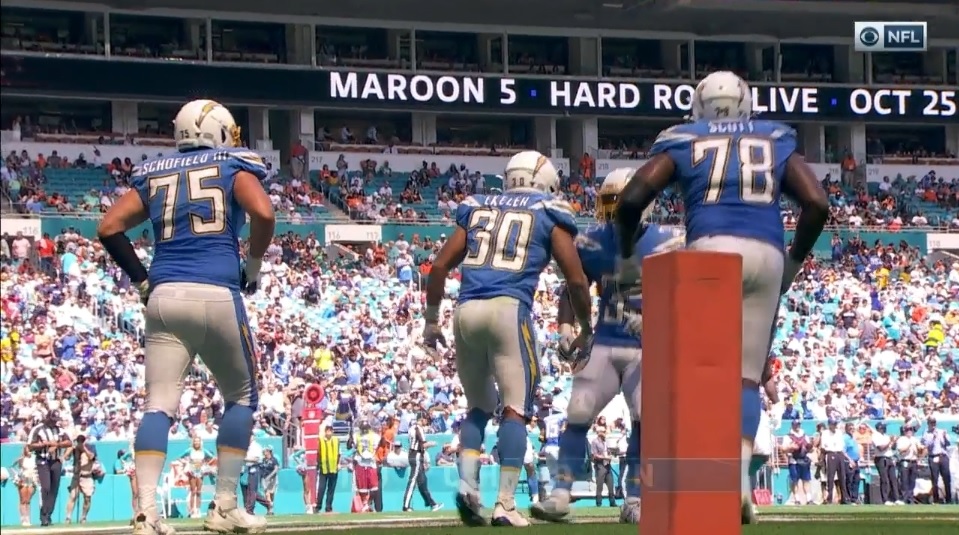 An attack that should have Melvin Gordon pretty much at a full-go after easing his way in the last two weeks since ending his holdout. So far, their run game hasn’t been very effective, just 19th in the league with a 4.0 yards per carry average, while Austin Ekeler is under that bar at 3.8.

The run game hasn’t been very explosive. Just ten carries of 10+ yards, that’s tied for 24th fewest in football, and Ekeler’s long on 59 carries this season is 19 yards.

Even with Gordon back, you should see lots of faces in the Chargers’ backfield. They will run 2 backs with a fullback and running back, the former being Derek Watt, one of the seemingly endless Watt brothers in the NFL. But they’ll mix and match their backs too. You’ll see Pony with Gordon and Ekeler on the field and they’ve used Ekeler and 3rd stringer Troymaine Pope at the same time. With Gordon’s snap count returning to relative normalcy, you should see more of the former.

They also go a little old school with some split back formations which isn’t huge to note but a little quirky for 2019 so I thought I should add it. 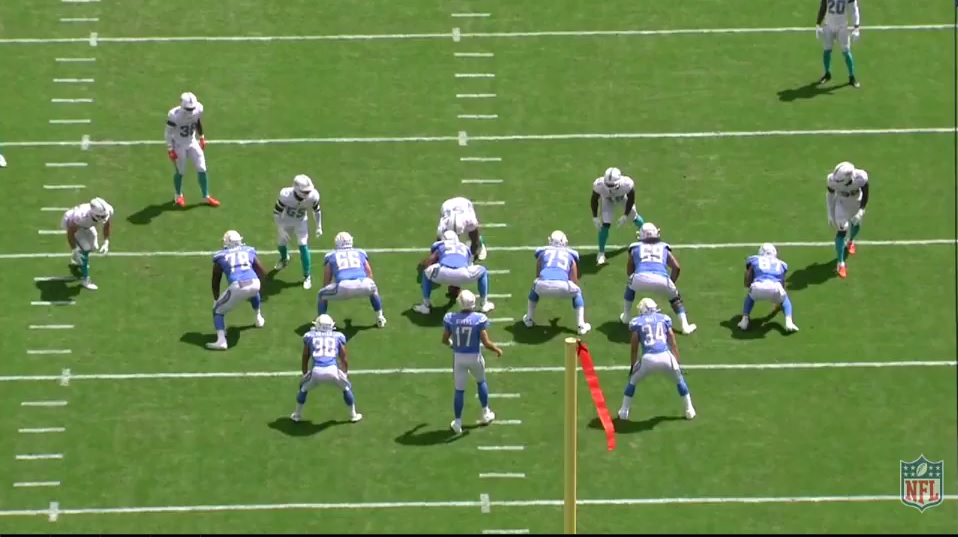 Los Angeles varies their run schemes well and can hit you with a lot of things. Zone and gap concepts are evident. They run power but a little less traditionally than say, the Steelers. This is G-Lead, where the frontside guard, not the backside one, is the lead puller. Check out the RG, #75, here.

They also run this counter play, often with a receiver coming across the formation on a split zone look (though this is not always a zone run).

One last note. They have run a tiny bit of Wildcat with backup QB Tyrod Taylor and could bust it out for a play or two Sunday night.

Some other offensive numbers to throw out at you. They’re strong on third down at 46.2%, 7th in the NFL, but poor in the red zone and finishing drives. Found the end zone 47.1%, that’s 24th league-wide, and they’re turning it over too often down there.

Despite a rush offense that isn’t sparkling, they’re doing a great job extending drives and controlling the clock. They’re #1 in average drive length, plays, and 4th in yards. Overall, they are 7th in total time of possession at nearly 32 minutes. Pittsburgh, by contrast, is 31st and only ahead of the winless Miami Dolphins.

Of course, led by Philip Rivers. Completing nearly 69% of his passes though his TD/INT ratio isn’t great (7:4). He’s been sacked 11 times but they’ve been feast or famine. Nine have come in two games. Steelers hopefully able to have a big day and they match up well against LA’s o-line, especially now that they’re down Mike Pouncey.

Keenan Allen is their #1 receiver and their go-to target on third down. His ten 3rd down receptions are tied 4th most. They’ve all moved the sticks too, tied for 2nd in the league only trailing the Rams’ Cooper Kupp. While Allen is their leader in yards and touchdowns, he’s not the leader in catches. His 38 grabs are one behind Ekeler, who ranks 3rd in the NFL in total catches with 39. Ekeler caught 15 passes for 86 yards a week ago, a checkdown machine and the fewest yards in NFL history – by about a 40 yard margin – for someone with 15+ receptions.

But they looked to get the ball in his hands at every opportunity. To close out the second half, he touched the ball four of their final seven plays. There seem to be designed plays to clearout and leverage space in the flat for their backs, primarily him, as well.

They also love to hit intermediate passes in the middle of the field. 15 yard dig routes. They’ll use different route combinations to open the throw up whether that’s levels or pin, the latter shown below.

Another primetime game, another tough trip to the West Coast. It’s not going to be an easy one on Sunday Night Football as the Pittsburgh Steelers take on the Los Angeles Chargers.

As Mike Tomlin said in his Tuesday press conference, he’s in charge of a 1-4 team making a tough trip to the West Coast to take on a future Hall of Fame quarterback.

Make no mistake about it: Philip Rivers is ticketed for the Hall of Fame, regardless of if he can win a Super Bowl late in his career or not. Yes, he has an unconventional throwing motion that looks like he shot-puts the ball rather than throwing it, but he’s made it work throughout his career, developing into quite the prolific passer.

Fortunately for Rivers, the Chargers have done a great job putting high-level offensive talent around him, including a stellar running back duo in Melvin Gordon III and Austin Ekeler currently, as well as a dynamic wide receiver duo in Keenan Allen and Mike Williams.

Allen is the obvious go-to guy on this offense, and he’s one of the top wide receivers in football, coming in at No. 4 in the league in receptions, No. 6 in receiving yards, and tied for No. 4 in receiving touchdowns.

When the Chargers get near the opponents’ 30-yard line, I’ve noticed that they like to get Keenan Allen working left to right across the field, working towards the right sideline.

In Week 1 against the Indianapolis Colts, the Chargers tried to get Allen going early, working the Colts’ secondary over inside the 30-yard line with the All-Pro receiver.

Lined up here in the slot to the left of Rivers, Allen shows great nuance in his release. Watch the skip-step about 5 yards off the ball, causing some hesitation in the defender’s pedal.

Once Allen has his timing down, he releases across the field into the vacated back half of the Colts’ defense for an easy throw for Rivers near the right sideline.

Then, in Week 5 against the Denver Broncos, the Chargers moved Allen to the slot right of Rivers, running an out route to the right boundary for the easy pitch and catch and the first down.

I really like the route concepts here by the Chargers as well; it’s perfectly schemed up to open throwing windows built off of each route.

With Williams on the opposite side of Allen, the Chargers have a good physical threat to use over the middle and on the boundary with contest throws.

That said, Williams works his way open over the middle with the best of them.

Lined up wide left here, it’s a deep dig route for Williams. The Chargers have the clear out route by Travis Benjamin in the slot, the over route by Allen, and the crossing route right to left by tight end Virgil Green. All of that allows Williams to cut back inside on the deep dig for the 20-yard catch against the Broncos.

The Chargers want to push the ball down the field to Williams where he can win contested catches with his size, strength and impressive body control. That could be a problem on Sunday night against Pittsburgh’s smaller defensive backs.

Gordon III is just returning back to a normal workload in the backfield after holding out for the first three weeks in a contract dispute. He looked a bit hesitate in Week 5 against the Broncos and was still getting his legs underneath him.

Fortunately for the Chargers, Ekeler has emerged as a Darren Sproles-like running back who excels as a receiver and a change of pace running back in Los Angeles’ system.

Ekeler runs well out of the gun, using his speed and change of direction skills well on outside zone and stretch runs to the perimeter.

However, he makes his biggest impact as a receiver, moving all over the formation to serve as a pseudo-receiver for the Chargers.

One thing I really noticed throughout five weeks with the Chargers and the use of Ekeler is on orbit motions behind Rivers, allowing him to stress coverage to the flats, where Rivers will then dump it off for big gains.

Unless you cover Ekeler with a slot receiver, there’s really no linebacker that can keep up with Ekeler in space.

He’ll run double moves, slants, and screens — just about everything in the route tree Ekeler can do.

The key for the Chargers though is the starting 5 up front. That unit took a huge hit on Wednesday when starting center Mike Pouncey landed on injured reserve with a neck injury. The Chargers were already without left tackle Russell Okung.

Here’s how I expect the Chargers to line up on Sunday, left to right:

Scott and Tevi are a rough tackle combination, but the Chargers do a good job of giving them consistent help, whether that’s Green staying in as a blocker, or running backs chipping.

Feeney has had a strong season at left guard, while Schofield continues to have a quiet, yet solid NFL career.

Quessenberry is a significant downgrade from Pouncey, and has never started a game in the NFL in two years after being drafted out of UCLA in 2018. The Steelers’ defensive line should eat on Sunday night.

On special teams, the Chargers are a mess once again in the kicking game. Los Angeles went with kicker/punter Ty Long early in the season to handle punting and kicking duties, but that didn’t work out, so the team signed Chase McLaughlin to handle kicking duties. He’s 2-for-3 on the season and had one blocked last week against the Broncos.

Long does just fine as a punter, but it was a shame to see the kicker/punter combination fail this early in the season.

While kicking has struggled, the Chargers have done very well in the return game.

Desmond King II returned a punt for a touchdown last week against the Broncos. The Steelers know him well, especially after last year’s 73-yard punt return at Heinz Field that was aided by an uncalled block in the back.