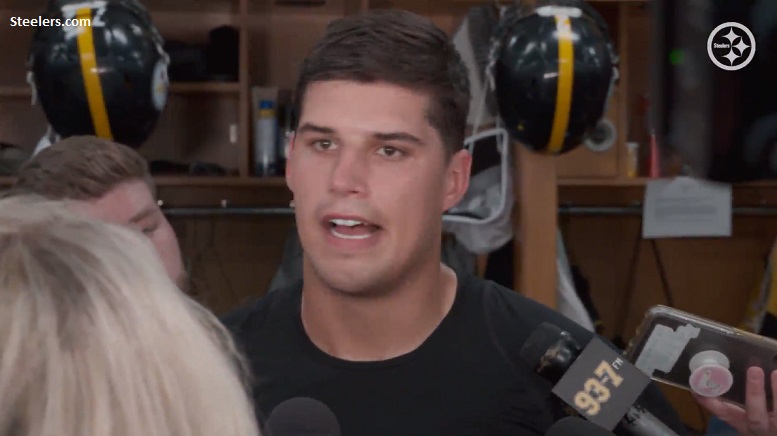 Game-one of the revenge tour of Pittsburgh Steelers quarterback Mason Rudolph will take place on Sunday at Heinz Field against the Baltimore Ravens and their quarterback Lamar Jackson, the fifth and final quarterback selected in the first-round of the 2018 NFL Draft. Rudolph was the sixth quarterback taken in that draft and not until the third-round and you can bet he knows what all five of the quarterbacks who were drafted ahead of him have done so far in the NFL.

On Thursday, Rudolph met the media and with the Ravens and Jackson now on tap, he was predictably asked if this first game against a quarterback drafted ahead him holds any special meaning to him.

“I’m competitive no matter who it is, but, yeah,” Rudolph said. “I think I know Lamar and we spent a lot of time through that draft process. So, we’re both very competitive individuals and it’ll be no different this week than any other week. But we both want to win and he’s a great player and I’m excited to play.”

While Rudolph said the right thing in response to the Thursday question, you can bet he’ll be carrying a big chip on his shoulder Sunday against the Ravens. He’s obviously hoping to show the Ravens that they traded up into the first round and drafted the wrong quarterback at No. 32 overall a few years ago.

“It’ll stick with me every minute of every hour from here going forward until the day I die,” said Rudolph about nor being selected until the third-round not long after he was drafted. “It’s definitely like a burning fire.”

Rudolph probably want too terribly fond about the seemingly dismissive remarks that Ravens head coach John Harbaugh made about him this past week when asked about the Steelers second-year quarterback out of Oklahoma State.

“I mean, he is what he is, you know? The tape says it,” Harbaugh said of Rudolph this past week. “I don’t care if it’s one game or 10 games or a hundred games, you are what you are as a player. You are what the tape says you are.”

With two touchdown passes on Sunday against the Ravens, Rudolph will become just the third quarterback in NFL history to throw two or more in the first four games of a career. He can also notch a second AFC North victory on Sunday at if successful, it would be the biggest win of his young career.

Rudolph will likely also face the other four quarterbacks drafted ahead of him later this season as the Steelers are scheduled to play the Cleveland Browns, New York Jets, Miami Dolphins and Buffalo Bills starting after the team’s Week 7 bye.