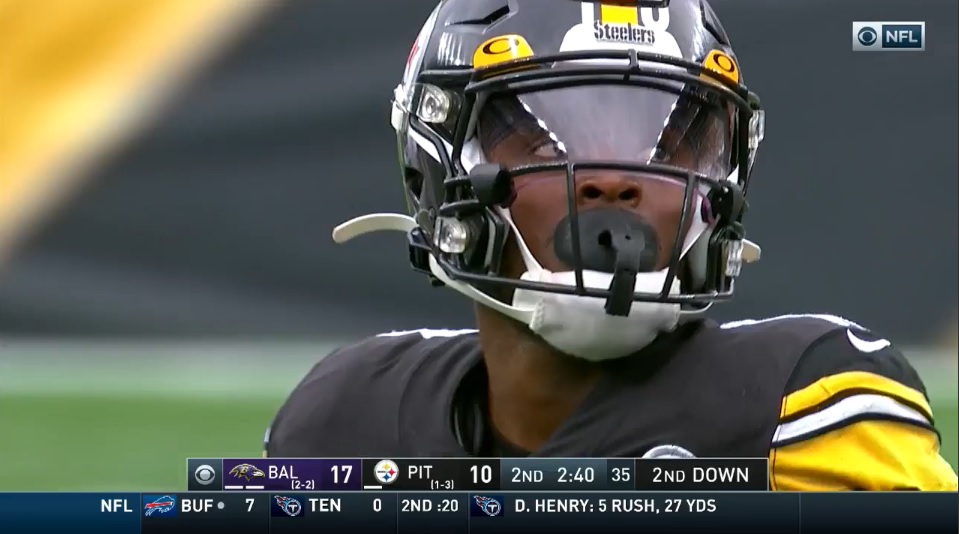 Devin Bush/ILB – Can you hear that? It’s clicking now for Bush. The hesitation we saw in the first quarter of the season is gone as he is now attacking the line of scrimmage. He’s using his hands better taking on blocks and not getting smothered as he was earlier. His change of direction is pretty impressive. He’s able to stop and start very quickly. His coverage in the passing game has been much better as well especially in Man. He doesn’t look confused anymore and knows who he has in coverage and works hard to stay in the receiver’s immediate vicinity. He’s shown very good ball awareness on previous fumble recoveries and displayed it on the interception as well.

He did have some bad plays as well.  The offsides penalty on a fourth and six is something that really can’t happen. He also left his area in Zone coverage late in Q4 allowing a completion in the vacated area. Overall, he’s playing like the first round pick we expected to see.

In the first quarter he shows what we’ve been looking for when he reads the play immediately, quickly gets downhill, avoids the FB block and makes the tackle.

Late in Q4, this play was right after the roughing penalty on Ola Adeniyi. They’re in Zone coverage and Bush gets a little overzealous running with the TE and allows the WR to cut into his vacated area for a 14 yard gain.

Diontae Johnson/WR – Johnson was kept pretty much in check catching 5 balls for 27 yards. He was able to separate on several underneath routes including one that Mason Rudolph threw too far outside. He did draw a holding call late in Q2 before the two minute warning. He was also called for offensive pass interference pushing a DB but it looked like he might have saved an interception.

We’ve seen him in other games decelerate in his routes and he did it again on a go route. There was some rain prior to the game and I saw him slip down 2 or 3 times. Likely just an equipment issue but he’s got to stay on his feet.

Justin Layne/CB – Layne got a few reps on punt cover as the gunner again. He did beat his guy handily on one rep that I believe was a fair catch. The next punt rep he was double teamed and showed good fight but was unable to break through the block.

Benny Snell Jr./RB – Snell was kept off the field on offense but he did his regular duties on special teams. Unfortunately, the rep that stood out was on the initial kick return. He and another player both missed their blocks leading to the returner being tackled at the 11.

Ulysses Gilbert III/ILB – That kick return I mentioned for Snell? Well this was the other player that missed his block that led to the tackle.  I had some higher hopes for special teams watching these guys in the preseason but it just hasn’t manifested yet.

Devlin Hodges/QB – For a guy who was forced into duty who likely didn’t have many, if any, reps at practice Hodges handled himself well. He showed good command right away rushing guys back to the line of scrimmage after the first play. He was decisive, got the ball out quickly and put it in a catchable position for the receiver. He had two incompletions and one was a drop by Jaylen Samuels. He flashed some mobility on a 21 yard scramble as well.  Most importantly, he gave them a chance to win.

He got a little deep on some of his drops but it didn’t hurt him in this game. Made a bad decision to throw across his body but the interception was nullified by a penalty. I think it’s a requirement for every rookie QB to do that at least once.