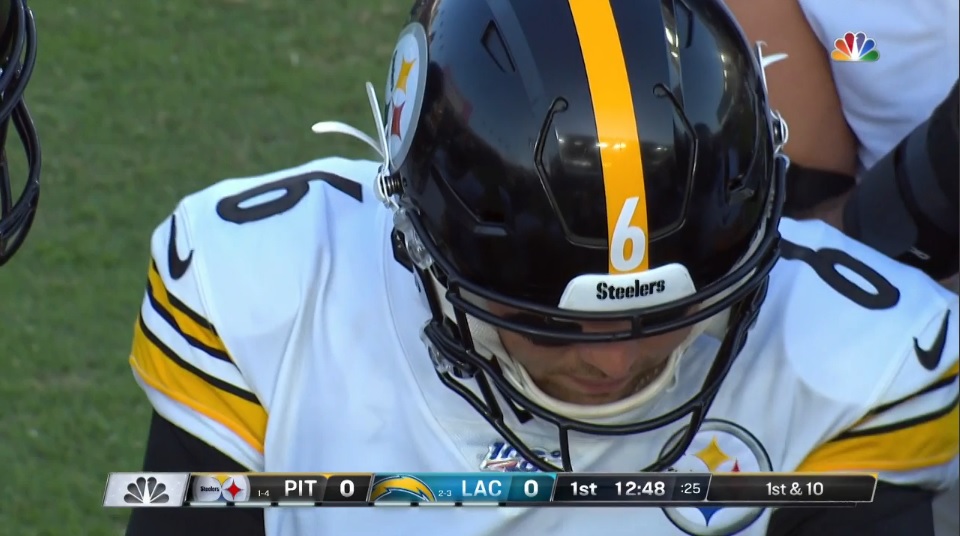 Devin Bush/ILB – He was very active again in this game and was a force to be reckoned with early. In order to create turnovers you need to be around the ball and Bush has been just that in the first few weeks.  He showed great awareness to recognize the backward pass and athleticism to get in into the end zone. Then later in the game while covering Keenan Allen he was able to corral the pass deflected by Tyson Alualu for his second turnover of the game. He’s looked so much better in coverage the last two weeks and I even saw him 20 yards downfield covering a slot receiver. Just great athleticism.

He rolled his ankle in the second quarter but was able to return.  He missed three tackles that I counted in the second half. That needs to be cleaned up and you don’t like to see your guys getting taunting penalties regardless of the game situation.

Diontae Johnson/WR – He had a quiet game statistically but did show some good things.  His change of direction and stop/start ability looked good on a tap pass that he took wide to the right before cutting back inside. His blocking stood out in the game sealing off a defender on James Conner’s touchdown run and I liked the hustle on Conner’s touchdown reception to sprint downfield and get into position to block for his teammate if needed.

He took a nasty hit cutting to the middle of the field for a pass and it looked like he might have initially gotten his bell rung but he was able to continue.

Here is the block on the Conner (30) run. Johnson (18) is at the top of the screen. He’s going to square up the defender with hands inside making it easier to control the defender. He shuffles laterally as Conner runs by to keep himself between the defender and the ball.  Well done

Justin Layne/DB – Layne got his work on the special teams and is starting to get more involved. He was the first man down on the first kickoff, avoided a block and slowed the runner but couldn’t make the tackle. Later in the game he did get a tackle on a kick off staying square to the runner and showing good COD to make the tackle. He also was the gunner on punt cover and blocking the gunner on punt return.

He did have two bad penalties getting called for a false start on punt cover as well as a fair catch interference.

Benny Snell Jr. /RB – With the injury to Jaylen Samuels, Snell got a chance to take over the number two running back duties and he performed well. The running game as a whole looked better but Snell showed patience, vision and strength running the ball and added a fourteen yard reception. He did a nice job getting yards after contact and showed agility and body control on a short yardage attempt.

On special teams he came really close to getting a blocked punt coming off the left edge. Blocked punts usually come up the middle but I’ll be keeping my eye on Snell off the edge going forward.

Here’s a good gap choice by Snell (24). An inside zone run where the runner needs to choose the right gap. The slide block by Nick Vannett (88) gets LB Kyzir White (44) to crash into the A gap and Snell makes the right read and heads for the B gap.

I really liked this short yardage run in Q4. He shows good feet to avoid the defender in the backfield, twists off a tackler just before the line to gain and pushed forward with an additional late lunge over the pile. This could easily have been a tackle for a loss.

Zach Gentry/TE – He was active for the game but only got credited for one play on offense and zero on special teams.

Ulysses Gilbert III/ILB – Gilbert was on the field for 20 special teams plays this week but didn’t have much of an impact.  He did have a strong rush on punt return nearly driving his man back to the punter. He has played 83% of the special teams snaps this year but has yet to make a consistent impact.

Devlin Hodges/QB – Getting his first start of the season Hodges performed like we hoped he would.  The game centered around the running backs and short passing game allowing him to complete 75% of his passes and throw his first NFL touchdown. He underthrew his first pass of the game, a deep shot to JuJu Smith-Schuster, possibly feeling a bit of nerves. He showed a quick release, good accuracy and really throws a catchable ball.  He displayed subtle movement in the pocket to find space and buy time. His awareness was also on point handling the bad snaps including recovering the ball that went behind him and throwing it away.

He looked like he was staring down the receiver on his interception which will be a teachable moment. Overall, a good performance.

Here’s a look at Hodges (6) in the pocket.  It starts out with him looking right and works back to the left.  He uses a subtle slide to his left as Maurkice Pouncey (53) starts giving up some ground. A quick release with solid ball placement leads to a nice catch by Johnson.