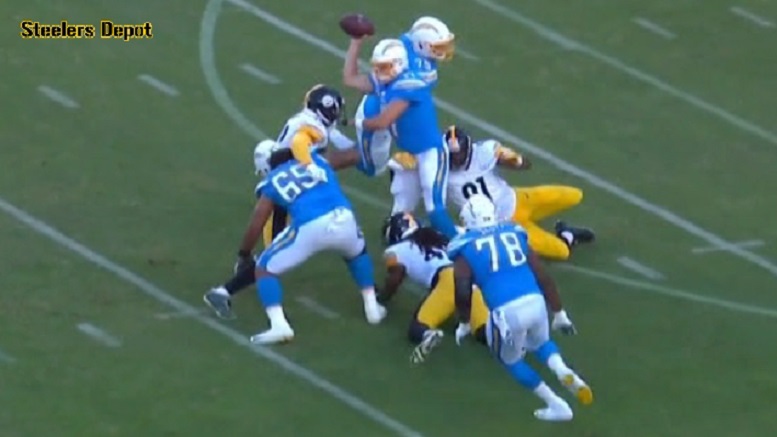 There is no definitive word as of Monday evening on the condition of Pittsburgh Steelers defensive end Stephon Tuitt, who suffered a pectoral injury early in the team’s Sunday night road game against the Los Angeles Chargers. However, Ian Rapoport of the NFL Network weighed in Monday evening on what he has heard about Tuitt’s injury status and the outlook doesn’t seem to be great.

“Well, they are still waiting for the tests on Stephon Tuitt’s injury, but my understanding is the fear is that it is at the least a partially torn pec, potentially a fully torn pec,” Rapport reported Monday evening. “And If that is the case, which again, they’re still waiting for the tests on this, there are a couple of different options. You can have surgery, which would mean he would be out for the season, a huge loss for the Steelers if that was the case. Or there are other different types of a pectoral injuries, torn pecs, which you can actually play through. They’re still trying to sort this one out and figure out what is going to happen to Stephon Tuitt. Either way, likely to miss, at the very least, a few weeks, at the most, he is going to miss the season. Tests, obviously, will tell the full story for the Steelers star.”

Steelers defensive end Cameron Heyward suffered a torn pec during the second half of the 2016 regular season and he was lost for the remainder of the year.

It’s worth reminding everyone that Rapoport is really the first to report about Tuitt’s condition on Monday and the team is still reportedly waiting for the test results to confirm what they probably already know.

Our own Melanie Friedlander will have a post on pectoral injuries for us to read that should be in by Tuesday morning. In the meantime, keep praying for Tuitt and hope that maybe his injury isntb as serious as it’s feared to be.

It will be a damn shame if Tuitt is indeed lost for the remainder of the year as he is having a great 2019 season and has 22 total tackles, 3.5 sacks, 6 tackles for loss and 7 quarterback hits through six games.

UPDATE: Chris Mortensen of ESPN now reports that Tuitt did indeed suffer a torn pec and will need surgery. That is expected to bring his 2019 season to an end.

The @Steelers outstanding DL Stephon Tuitt did tear pectoral and will need surgery, out for year, per sources. No longer a “fear” but reality. Another huge setback for team.

So, guessing this is Tomlin being told about Tuitt's injury #Steelers pic.twitter.com/7Yla4vsy6B

DE Stephon Tuitt will have an MRI today to determine the extent of his injured pectoral muscle. Those types of injuries are usually never good. Tuitt was injured in first quarter in LA