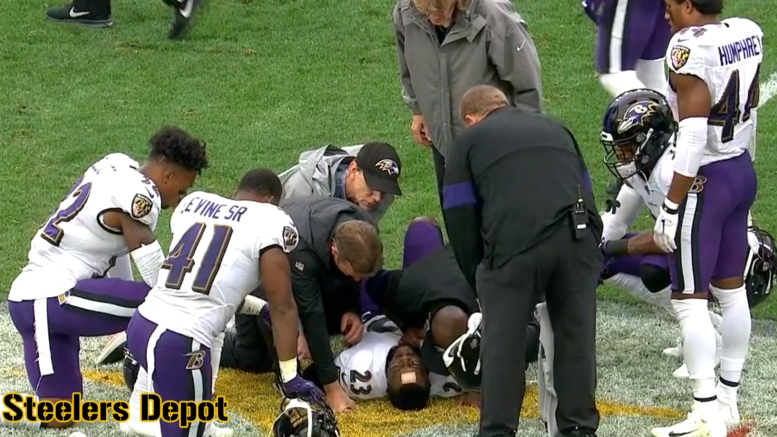 The Baltimore Ravens were able to end a two-game skid today against the Pittsburgh Steelers, getting back over .500 to go to 3-2 on the year, but it did come with a price. While rookie wide receiver Marquise Brown and second-year tight end Mark Andrews were able to return with minor injuries, they won’t be seeing starting strong safety Tony Jefferson on the field again this year. The veteran suffered a torn ACL that may prove to entail further damage beyond that, according to Ravens head coach John Harbaugh.

Jefferson, who had just one tackle in the game but also recorded a pass defensed, suffered the injury five minutes into the fourth quarter. Devlin Hodges had thrown an interception on the play, but it was negated by Jefferson holding onto tight end Nick Vannett, doing so precisely because he was injured and wanted to assure that he wouldn’t leave a receiver open.

“He has at least an ACL, probably more”, Harbaugh told reporters after the game while addressing the injury. “So he’ll be out for the season, as it stands right now”. He finished by saying that “all things are possible” and that he will “find a way to come back stronger than before”.

Originally signed as an unrestricted free agent in 2017, Jefferson was entering his third season with the Ravens this year. He’ll finish the season with 21 tackles and two passes defensed. Chuck Clark, a third-year player, replaced him in the game, but DeShon Elliott will also be an option to start for the rest of the year.

To make matters worse, the Ravens were using Jefferson as the communicator on the defense, wearing the green dot on his helmet, over the course of the past two games. Baltimore is still trying to figure out the best way to relay information in the post-C.J. Mosley defense. They went right from Ray Lewis to Mosley, so they’ve never really had to worry about this before.

Baltimore had been uncharacteristically struggling defensively heading into this game, allowing 500-plus yards in consecutive games for the first time in franchise history, so losing your starting strong safety is certainly not going to do them any favors on that front.

Still, they did go on to win the game, retaking the AFC North lead, at least temporarily, pending the result of the game between the Cleveland Browns and the San Francisco 49ers. Meanwhile, the Steelers are trying to stay alive after falling to 1-4, and they may have to go a little ways with their number four quarterback in Devlin Hodges.