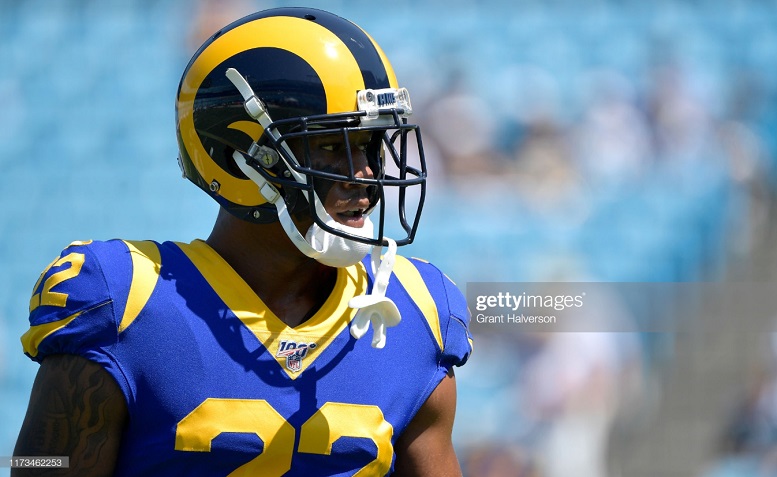 A player-for-player trade between two NFL teams took place on Tuesday and the Baltimore Ravens were one of them.

According to Adam Schefter of ESPN, the Ravens traded linebacker Kenny Young to the Los Angeles Rams on Tuesday in exchange for cornerback Marcus Peters and a 2020 fifth-round draft pick.

As part of the Marcus Peters-for-Kenny Young trade, the Rams also received a 5th-round pick, per source. Rams would have gotten a 2021 3rd- or 4th-round comp pick for Peters…so instead they get a 5th a year earlier, and a young player they liked last year – and saved money.

Peters, who had a very poor showing for the Rams this past Sunday in the team’s loss to the San Francisco 49ers, will now likely play opposite Ravens cornerback Marlon Humphrey. That means that he’ll likely take over for veteran cornerback Brandon Carr, who has started all six games this season for the Ravens with cornerback Jimmy Smith still recovering from a knee injury.

As for the Rams trading away Peters on Tuesday, they are now left Troy Hill as one of their starting cornerbacks with Nickell Robey-Coleman likely remaining in the slot. The Rams other starting cornerback that was playing opposite Peters, Aqib Talib, was placed on the Reserve/Injured list Tuesday with fractured ribs.

Young, who was selected by the Ravens in the fourth round of the 2018 NFL Draft out of UCLA, started six games for Baltimore with two forced fumbles and a fumble recovery.

The Steelers will play the Rams in Pittsburgh in Week 10 and Los Angeles will be coming off their bye week. The Rams next two games are against the Atlanta Falcons and Cincinnati Bengals prior to the team’s Week 9 bye.

As for the Ravens, they won’t play the Steelers again until Week 17 and we can only hope that game has meaning for Pittsburgh come that time. In the meantime, however, the Ravens are preparing to play the Seattle Seahawks on the road this coming Sunday. Their bye week will follow and then they’ll host the New England Patriots in Week 9.

The Ravens currently lead the AFC North with a 4-2 record with two of those wins coming within the division against the Steelers and Bengals.

UPDATE: The Rams have since acquired cornerback Jalen Ramsey from the Jacksonville Jaguars via a Tuesday trade.

It’s happening: Former Jaguars’ CB Jalen Ramsey is being traded to the LA Rams for two first-round picks in 2020 and 2021, and a fourth-round pick in 2021, source tells ESPN.