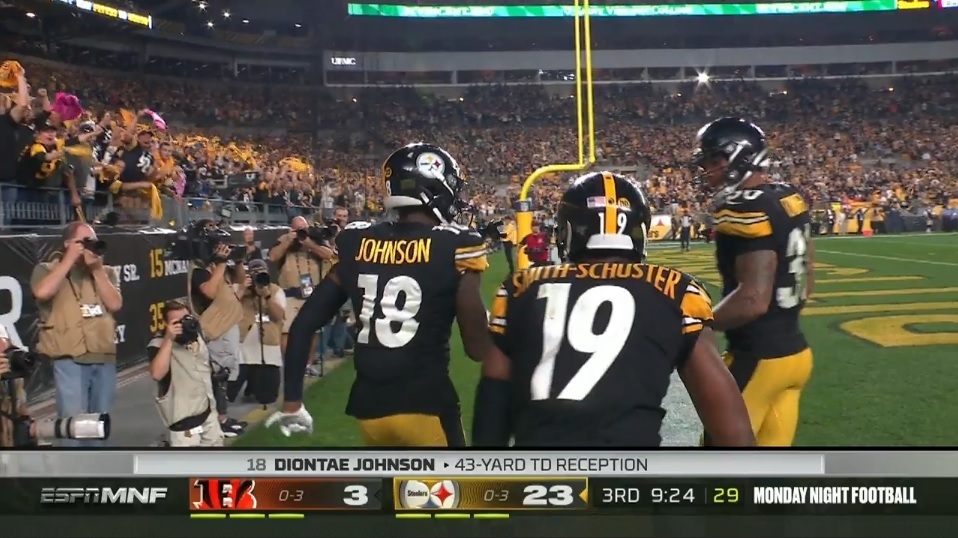 Monday night’s thrashing of the Cincinnati Bengals at Heinz Field by the Pittsburgh Steelers in front of a national audience was a throwback to yesteryears as offensive coordinator Randy Fitchner dialed it back to his college days with some Wildcat and running backs attacking east and west, while defensive coordinator Keith Butler saw his charges rack up 8 sacks and harass Andy Dalton all night long.

The Bengals are certainly a bad, bad football team, but a win is a win and Steeler Nation will take all it can get right now.

Second-year quarterback Mason Rudolph looked much more confident and comfortable against the Bengals, while James Conner and Jaylen Samuels ran the football down Cincinnati’s throat, allowing the Steelers’ offense to possess the football longer than normal, keeping a young, fast defense off the field to consistently recharge and chase down the football.

What a fun night.

These grades should be fun too.

Yes, Rudolph put up great numbers (24-for-28, 229 yards and 2 touchdowns), but 12 of Rudolph’s 24 completions came behind the line of scrimmage, and the second-year quarterback attempted just 3 throws all game long that went further than 15 yards past the line of scrimmage.

Give Rudolph credit though: he was decisive throwing the football taking whatever the Bengals gave him, and when he did push the ball down the field, he was successful.

Pittsburgh needs to do a better job taking the training wheels off of him moving forward, but if this is what they ask of him until the bye week, I’ll understand it. Just don’t turn the football over, complete the easy throws and take the occasional shot.

Now that’s how you run the football!

It was nice to see the 2008 Miami Dolphins get reincarnated on Monday Night Football as Conner and Samuels ran all over the Bengals in the Wildcat formation, with Samuels as the decision-maker, a la Ronnie Brown in ’08.

I thought both backs showed a lot of explosion and power as runners on the night, with Conner ripping of 3 runs of 8+ yards on the night, including a 22-yarder to open the second half.

Samuels did the dirty work between the tackles, ripping off a 13-yarder off left tackle in the second half, and added a 2-yard touchdown out of the Wildcat on a read-option with Conner sprinting left to right across the formation.

As receivers the duo tore up the Bengals, combining for 16 catches for 140 yards and Conner’s 21-yard touchdown in the second quarter. It was very refreshing to see Fitchner get some of his most talented offensive weapons involved heavily in a game the Steelers had to have.

Aside from Diontae Johnson’s fumble on the Steelers’ first drive of the game, it was a solid night for the Steelers’ receivers. That said, it was a game in which Pittsburgh took the air out of the football and rolled to a physical domination of Cincinnati.

Johnson did finish with 6 catches for 77 yards and a touchdown, which was a 43-yarder that came off of a coverage bust by Cincinnati (also, what is he doing jumping?), but a lot of his catches were of the easy variety, with two of them coming on simple tips from Rudolph after crossing the formation at the snap.

Despite playing an offensive-high 45 snaps (96 percent) on the night, James Washington had just one target and finished with no catches. Don’t panic just yet, folks. The Steelers definitely still believe in him, based on snap counts, and they even trusted him to serve as a lead blocker on some runs in the second half.

JuJu Smith-Schuster simply doesn’t care what his stats line is, as long as the Steelers win. That was never more evident than Monday night when the star receiver had just 3 catches for 15 yards on 4 targets. Pittsburgh won though, and that’s all that mattered to JuJu.

Johnny Holton was called for a ridiculous offensive pass interference on one of Rudolph’s deep shots and was injured on the play. I don’t think we saw Holton play offensively the rest of the game.

Nick Vannett made an impact right away, as I expected. The former Seahawk hauled in 2 catches for 28 yards and really had a strong night as a blocker, including a great job of working back to pick up a defender breaking free towards Rudolph on his 43-yard touchdown to Johnson.

Along with Vannett, I thought Zach Gentry showed some flashes as a blocker on Monday night, sealing the edge a few times on runs to spring Samuels and Conner.

They didn’t have a huge impact in the receiving game, but the duo really played well as blockers, essentially serving as extra tight ends on the night, helping the Steelers run the ball at will.

Yes, the Steelers rushed for just 2.6 yards per carry, but the offensive line got one heck of a push up front throughout the game and looked pretty darn good doing it.

On top of that, not a single Bengals defender came anywhere close to hitting Rudolph, let alone getting a hand on him when he dropped back to pass.

Some of that has to do with the football getting out quickly, but guys like Carlos Dunlap, Sam Hubbard, and Geno Atkins were rendered obsolete rushing the passer.

I thought Alejandro Villanueva looked pretty good this week after a dreadful Week 3. He looked much more powerful with his punches and moved well when asked to pull across the formation.

Ramon Foster struggled to consistently get a push up the middle on the ground, but he passed off stunts and twists really well once again and had an obvious hop to his step this week.

Matt Feiler also had a bounce back game even if he should have been called for an ineligible man downfield on Conner’s 21-yard touchdown catch.

Overall, it was a great night for the offensive linemen and helped the offense get back on track under Rudolph.

Find me a defensive line group playing better right now than the Steelers; I dare you.

Stephon Tuitt is playing incredible football right now, while Cam Heyward is stepping up to be the leader the Steelers absolutely need through sheer will on the field, leading by example.

Javon Hargrave is obviously battling through some sort of arm injury, but he was physically dominant as well. That says a lot about the Bengals’ offensive line, but at the same time, it shows just how great the defensive line is.

Tyson Alualu also came in and succeeded, dusting Bengals guard Billy Price for a sack late in the game.

Barron, much maligned the first 3 weeks of the season for lackluster play, turned it up a notch Monday and flat-out balled out, finishing with a team-high 11 tackles, a tackle for loss, a pass breakup and an interception in the end zone.

He showed great effort and played with a hot motor. It was great to see. The only real knock on Barron’s performance was his brain cramp in not touching down Tyler Eifert after a catch.

Devin Bush had another strong game, recording a sack, 9 tackles, 3 tackles for loss and a great pass breakup on Eifert over the middle of the field. The game is slowing down for the rookie and he’s really turning it up.

Bud Dupree had a great game too. That shouldn’t pain anyone to say, because he destroyed Andre Smith all game long, including a strip sack of Dalton that was probably Dupree’s best pass rush rep of his career.

I was pleased with the work guys like Jayrone Elliot and Ola Adeniyi put in late in the game as well, showing they could take some snaps throughout games to keep Watt and Dupree fresh.

This defense is really starting to round into shape, and a lot of it has to do with the coverage abilities on the back end.

Joe Haden and Steven Nelson continue to put together strong games on tape. That said, the pair did get called for one pass interference penalty each in the win. Haden and Nelson helped shut down Tyler Boyd and John Ross III in the win as the dynamic duo combined for just 6 catches for 69 yards.

I really thought Mike Hilton should be in discussion for Pittsburgh’s best defender Monday night. He was everywhere, breaking up passes, blitzing off the corner, making stops behind the line of scrimmage, and giving the defense a jolt every time he made a play.

Cameron Sutton relieved Hilton at times and made plays on the football too, breaking up a third-down throw intended for Boyd late in the game. Sutton is playing really well in limited action.

At safety, it was a much quieter week for Minkah Fitzpatrick and Terrell Edmunds, but the pair did what they need to do when called upon, combining for 8 stops, flying downhill to fill lanes against the run.

Special teams continue to be a shining beacon for the Steelers, at least in the kicking game.

Chris Boswell continues to show that last year’s struggles were an aberration, while Jordan Berry continues to punt the heck out of the ball, helping the Steelers flip the field when they need to.

Boswell drilled both field goals and all 3 extra points in the win, while Berry was called upon just twice, yet drilled a 62-yard punt and pinned the Bengals back deep in their own territory.

Coverage units were strong on the night as the Bengals weren’t able to create anything in the return game with Alex Erickson, who averaged just 22 yards per return.