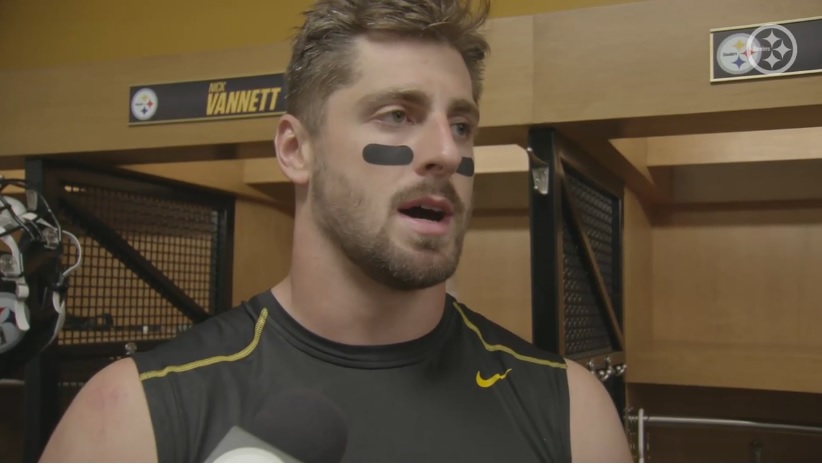 Sure, Nick Vannett was probably pandering a bit. But he’s pretty good at it. And oh yeah, pretty good at tight end too. Vannett made his Pittsburgh Steelers debut Monday night, catching two passes in the team’s clobbering of the Cincinnati Bengals.

To hear Vannett tell it, he was ecstatic to be part of the environment. Following the win, he tweeted out what it was like to suit up in black and gold.

Most fun I’ve had playing football in idk how long. Beyond ecstatic to be apart of this organization !! #HereWeGo

“Most fun I’ve had playing football in idk how long. Beyond ecstatic to be apart of this organization !! #HereWeGo”

Hard to offer a more ringing endorsement than that.

Some of that excitement comes from winning, of course, but also the trust the Steelers’ coaching staff showed in Vannett during the week.

“It was just fun to make plays out there tonight,” he told the media postgame via Steelers.com. “To have the coaching staff have some trust in me. With me only being here six days now.”

Obviously, some of that trust was unearned. Vannett was basically the only option tonight, one of two tight ends active for the game. Rookie Zach Gentry, with ten snaps under his belt heading into last night’s matchup, was the only other option.

Vannett wound up playing 44 snaps, exactly 75% of the team’s total. He blocked well, including keeping the pocket clean for Mason Rudolph on his 43 yard strike to Diontae Johnson, and provided chauffeur service for James Conner to get into the end zone on his score.

Vannett also cited his offseason work with Rudolph, allowing those two to build trust quicker than other quarterbacks.

“With him trusting me on some of those throws, coming up with those big plays, hopefully we can keep carrying that over to the next couple of weeks and the rest of the season.”

Both of his receptions came in scramble drills, the second a difficult adjustment to a purposely underthrown ball. With Vance McDonald seemingly having a chance returning against the Baltimore Ravens, the Steelers will have a solid one-two punch at tight end the rest of the season.