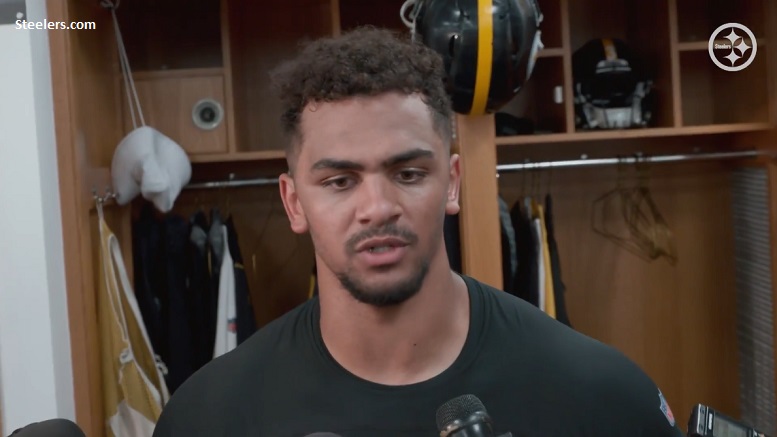 During his Tuesday press conference, Pittsburgh Steelers head coach Mike Tomlin was asked if he planned on using a player from a different position to simulate Baltimore Ravens quarterback Lamar Jackson in practice this week and his response was interesting, to say the least, now that 24 hours have passed since he answered that question.

“I think you lose too much in the passing game when you do that,” Tomlin said. “We will make do with the guys we have and that is just the reality of it. I am sure everybody goes through those things. No one has a quarterback that moves and throws like Lamar Jackson, so we are not alone in that.”

As it turned out, Tomlin didn’t just make do as it was announced Wednesday afternoon that the Steelers had signed quarterback Taryn Christion to their practice squad. Christion, who was regarded as one of the best dual-threat quarterbacks in the FCS the past three-plus years, is a South Dakota State product. Not only did he rush for 1,515 yards and 26 touchdowns on 408 carries in the 48 games he played in at South Dakota State, he also passed for another 11,535 yards and 104 touchdowns. In short, Christion was signed on Wednesday to emulate Jackson in practice this week.

When Christion talked to the media briefly on Wednesday he was asked if the Steelers have explained to him what they were looking for him to do this week.

Taryn Christion talks to the media following his first practice about getting the call to join the practice squad, adapting to a new role, training since preseason and more. pic.twitter.com/2wzOrnxo3k

So, is this just a one-week gig with the Steelers for Christion?

“They didn’t mention anything, just said, ‘come out and play hard,’ Christion said. “You know, I’m just excited to be here. Excited to have an opportunity somewhere. So, just was excited, just ecstatic to get the call last night and happy to get out here today.”

At his pro day earlier this year Christion reportedly measured in at 6015, 218-pounds and ran the 40-yard-dash in 4.49-seconds. He signed with the Seattle Seahawks as an undrafted free agent in early May but was waived by them by the middle of the month. Christion ultimately signed with the Dallas Cowboys in late July and spent all of training camp and the preseason with them before finally being waived during the final round of roster cuts.

During the preseason, Christion played a total of four special teams snap in the Cowboys first two contests. However, he did play 51 offensive snaps in the Cowboys final two preseason games and completed 12 of his 20 total pass attempts for 148 yards with one touchdown and one interception. He also rushed seven times for another 25 yards but did fumble once.

So, what has Christion being doing since he was waived by the Cowboys just prior to the start of the regular season?

Christion was then asked if he’s only been working out as a quarterback since his release.

“Yeah, just as quarterback with him [Riggs],” Christion said. “I did do some special teams stuff, ran some routes with the Cowboys, but with my training, just focusing on quarterback.”

Christion, however, did say that he’s open to playing other positions for the Steelers if they need him to do so.

“Yeah, yeah, definitely,” he said Wednesday. “I think I showed that with the Cowboys and just open to being a team guy. Just whatever role I can fill, if there’s a role that needs to be filled, I’m willing and able to do my best to fill that role.”

Finally, Christion was asked again on Wednesday if he’s been told by the Steelers that his number one responsibility now that he’s been signed to the practice squad is to give the team’s defense a good look of what Jackson might do on Sunday.

“We haven’t specifically said, you know, what I’m going to be doing, but just going through practice today and run running some scout team stuff, it looks like that’s what it’ll be,” Christion said. “You know, go out there, do my best to just go out there and play hard. I’m not Lamar Jackson, so I’m gonna go out and I’m gonna play hard. I’m gonna run fast and do those things, but I’m still going to be me in a sense, too. But obviously he’s an athletic quarterback, so try and give the defense a good look.”

It will now be interesting to see if Christion is able to show the Steelers enough between now and Saturday to convince the team to keep after this week is up. The Steelers already have another quarterback on their practice squad in the form of Paxton Lynch and thus it wouldn’t make much sense to keep both he and Christion past this week.

While I obviously don’t think there much of a chance of it happening, it would be funny if the Steelers promoted Christion to their 53-man roster on Saturday and played him seven or so snaps on Sunday against the Ravens to give the Baltimore defense something else to defend in the same matter that the Wildcat was used on Monday night to limit the exposure of quarterback Mason Rudolph to that defense. I’m not sure why such a cockamamie idea such as that entered my head, but being as it did, I figured I would share it at the end of this post for all to enjoy.

Regardless, if Christion does his job well enough this week and it results in the Steelers defense severely limiting Jackson Sunday at Heinz Field, this wek might not be the final time we write about him.

Below are a few highlights of Christion for you to watch.