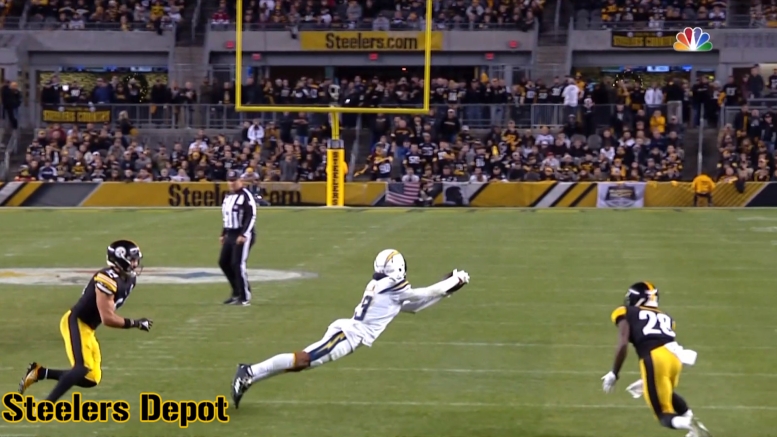 I will start by apologizing for this reminder.

The date was December 2, 2018.  The Steelers were playing the Los Angeles Chargers. Over the course of about 3 hours a man named Keenan Allen showed us all how you take advantage of coverages.  He lined up all over the field but often he was in the slot. I’m sure he smiled a time or two looking across the line of scrimmage to see a linebacker lined up across from him. He set a career high that day with 19 targets. He matched his second best outing in his career with 14 receptions.  He totaled 148 yards and touchdown in a 33-30 win for the Chargers.

Changes must be made.

Keenan Allen vs Everybody

Using everybody in the match up to watch may seem vague or simplistic but from what I’ve watched that needs to be the philosophy employed. And yes everybody includes linebackers just not how they were used last year.

As NFL receivers go, Allen is going to be right up near the top in everything you want.  He’s an excellent route runner, has very good hands and has the mental processing and athletic ability to find many ways to get open. Through five games he has 53 targets, 38 receptions and 470 yards with 3 touchdowns. The next highest wide receiver on the team is Mike Williams. He has 28 targets and 14 receptions.  The passing offense goes through Allen.

Off Man and Zone – These are options and can have some effectiveness if disguised well but if you play this the majority of the time Allen is going to feast all game and will end up with similar numbers to last year. He and QB Philip Rivers will take the 7-10 yard gain all night if you give it to them. So while these coverages will be mixed in I’m going to hope this is not the choice. On top of that Allen has 130 yards after the catch through 5 games so leaving him in space away from a defender could be asking for more trouble.

Shadow/Man – This season the duo of Joe Haden and Steven Nelson have played very well which may prompt you to say the Steelers should just use one of them to shadow Allen. Have one guy cover him no matter where he lines up.  Not a bad theory and that is what the Detroit Lions did for most of the game in week two using Darius Slay to man up on Allen.

For the football fan it was a fun matchup to watch and looking at the numbers it was semi-successful for both of them. Allen got 15 targets, had 8 receptions and 98 yards. Slay held him out of the end zone which is good but was also called for at least two penalties that I saw.

Combo Coverages – Use multiple players to focus on Allen.  Utilize bracket coverages with a man inside and outside of him. Mix in some safety help over the top which allows the corner to try to undercut the route. The linebackers need to aware of him on crossing routes and cut off his path and get enough depth to get under the deep in routes.

Here are some examples I saw on film.

Vs Detroit, Allen (13) is lined up at the bottom of the screen. Slay (23) is in man coverage. Its setting up to be a shallow Cross but linebacker Christian Jones (52) is going to step back into his route and wall him off.

Vs Houston, this looks like Man coverage on everyone but Allen.  Allen is lined up outside on the right and he’s going to run a Corner route. He’s going to have a safety spying to the inside that drops him when he breaks to the outside and is going to pass him off to the corner.

Vs Houston, lined up on right side he’s going to run a Go route to the outside. They rotate a safety from the center of the field to a deep cover two to aid the corner who has good coverage on this rep.

Vs Miami, Allen is wide right and he’s going to run a Dig route.  The slot defender is going to play Man on the slot receiver and vacate the inside. The linebacker has to account for the running back out of the backfield but he’s reading the QB and he tried to get deep enough to make a play but is just a bit late.

Vs Denver, he’s in the slot and going to run a deep out. You can see the safety help over the top but the corner isn’t able to get under the route so this one is a completion.

The Steelers should watch the Chargers last two games vs Miami and Denver. After putting up 29 receptions for 404 yards in the first 3 games Allen was limited to 9 receptions for 66 yards over the last two.

Keys to Limit the Production

Communication – I know, I know. Big surprise here but until they get it right we have to keep bringing it up. They must know the coverage they are playing. The must know who has Allen.  They must understand the zones so they know when to pass him off or pick him up.

Confusion – Mixing up the coverages and who is covering to keep Rivers and Allen guessing.  You can’t let Allen be the guy to beat you.  Put that on the rest of the Chargers receivers who have yet to show they can carry the load. Equally important is not putting all the pressure on one defender to have to try and stop him.  Use everyone you can and put two guys on Allen until the other receivers show they can beat you. I would expect all the outside and nickel corners to line up across from him at some point and utilize the safeties in bracket coverages and over the top.

Linebackers – It’s ironic after what happened last year but the linebackers are vital to the success defending the middle of the field. They need to cut off crossing routes, get depth on Dig routes and must know their area in Zone and being able to close on the short area passes.

Tackling – As I mentioned above he has 130 yards after the catch and is difficult to take down. That averages out to an extra 3.4 yards per reception.  When he does make the catch, they must get him down. Not with shoulder bumps, not with two hand pushes. Wrap and tackle every time.

I’m sure Keith Butler learned from his mistake last year. Let’s see what he comes up with this year.