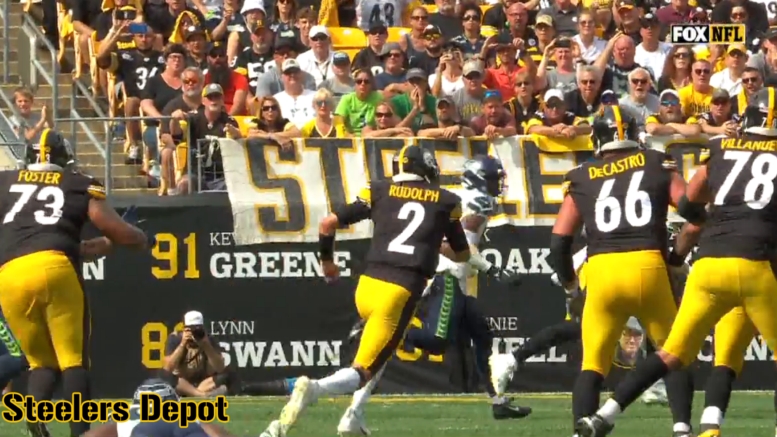 It’s never easy when a team loses their starting quarterback. To lose the backup after that, then things really start to get tough. That’s where the Pittsburgh Steelers found themselves last week, entering a primetime game on the west coast with an undrafted rookie out of an FCS school under center for one of the flagship franchises of the game.

But while Devlin Hodges handled himself well enough for the team to win that game—just their second of the year—everyone, including his backup, is more than happy to see Rudolph back on the field this week after recovering from a concussion that he suffered taking a scary hit from Baltimore Ravens safety Earl Thomas.

For those keeping track at home, by the way, Rudolph told reporters this week that he did get back in tough with Thomas, who previously said that he reached out to the quarterback about the hit to let him know it wasn’t malicious, but did not get a response.

Not that anybody should that really been losing any sleep over that. The much more interesting and encouraging remarks were what he reserved when talking about how he intends to approach the game and his style of play going forward following his first concussion at the professional level, and second known.

The play on which Rudolph was injured—the only part of the day that he says he can’t remember—was in fact on a play in which he had to extend it. it was a critical third down, and after flushing out a bit to his left, he found James Washington for a big conversion, knowing that he was about to take a hit as he let the ball go.

Taking a hit like that can certainly make one gun-shy, at least at the outset of your return. And really, it’s easier to say that you’re going to play the same way, and much harder to do it once you’re out there dodging 250-pound defenders in live action. But we’ll find out soon enough if he does indeed play with that same aggressiveness that originally drew the Steelers’ interest.