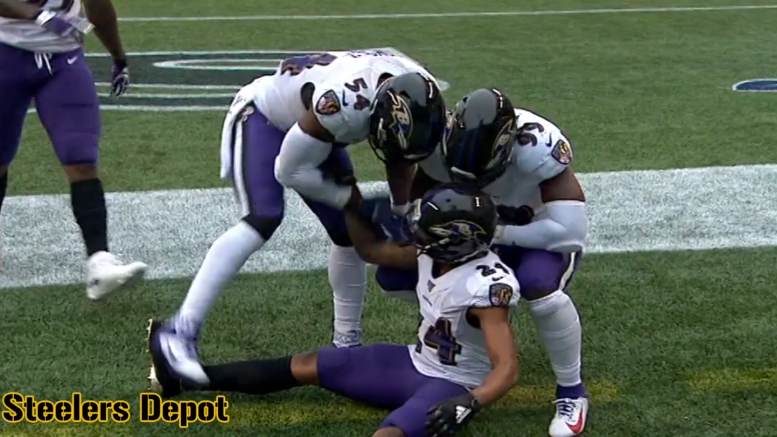 While they didn’t make a move as big as trading for Jalen Ramsey, the Baltimore Ravens did register on the scale last week when they were able to acquire Pro Bowl cornerback Marcus Peters from the Los Angeles Rams for a relative bargain.

They gave up just a fifth-round pick, plus second-year inside linebacker Kenny Young, in exchange for Peters. Considering the impact that he was able to make in his first game, playing a full allotment of snaps and registering an interception that he returned for a long touchdown, it seems like it’s going to work out pretty well for them. Unfortunately.

With starter Jimmy Smith still sidelined, Peters just slid directly into the starting lineup without incident. Brandon Carr played on the outside on the opposite side, with Marlon Humphrey, the other start, moving into the slot during sub-packages. According to Pro Football Focus, in fact, he logged 58 of his 71 snaps in the slot.

It’s notable that Peters is scheduled to be an unrestricted free agent in 2020, but there are two things to consider in that regard relative to his value to the Ravens. For one thing, you already know how much they value their compensatory picks. Just yesterday, as I wrote about, they released a player just to preserve one compensatory pick they are projected to get.

The other thing to consider is the fact that Baltimore has it sights set high this year, for 2020. They believe they can win the Super Bowl. At 5-2, they are really not off to a bad start, especially coming off a significant victory on the road against the Seattle Seahawks.

It goes without saying that if Peters’ play can land them another Super bowl trophy, then a fifth-round pick plus a player who was losing ground and even ended up as a healthy scratch would be a small price to pay, even if they lose him the following year…and potentially recoup a third-round compensatory pick for him on the back end.

What happens when Smith returns to the lineup, however? He is back on the practice field, so is probably not far out. I would expect that he may be able to return to the field after the Ravens’ bye, which is next week.

Presumably, Carr will be the odd man out, with Peters and Smith on the outside and Humphrey on the inside. In that case, it will be interesting to see if they leave Humphrey on the field for every snap, moving him around, or limit him to the slot.