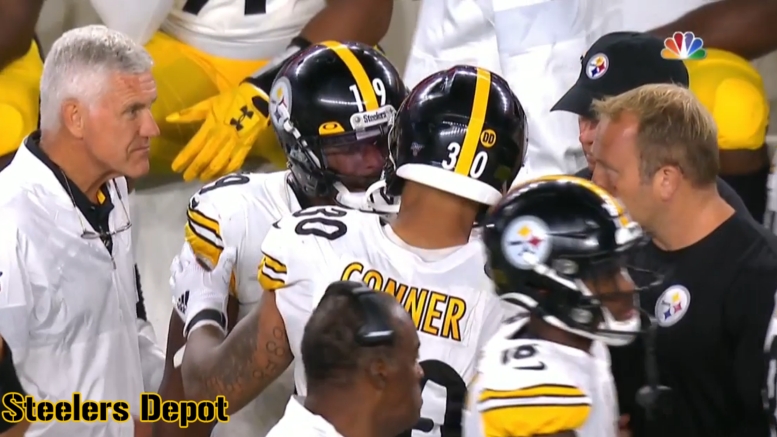 Call him an optimist, but Pittsburgh Steelers wide receiver JuJu Smith-Schuster likes what he sees of his team’s offense. Maybe no so much, necessarily, about what they have been able to accomplish on the field up to this point, but more so what he sees the group being capable of doing.

While they have been able to do a little of this and a little of that here and there, one thing that they have yet to do is do to anything consistently well. They had their best rushing performance of the season on Sunday against the Los Angeles Chargers despite working with their third-string quarterback, so perhaps that is the start of something.

Much of that had to do with rookie Benny Snell, who rushed for 75 yards on 17 carries. He had a couple of big runs, including an explosive play, and was able to make some conversions on third down as well. James Conner had more of a battle of attrition on the day, but was able to score from distance.

The offensive line obviously has had a lot to do with that. They had arguably their best game on Sunday, keeping Devlin Hodges clean while opening some rushing lanes for their running game. They didn’t put up a ton of yards, or a ton of points, but they were able to extend drives and keep the ball in their own hands.

But Smith-Schuster believes this is a dynamic group that can do more than that. He, of course, can do a lot more than what he has had the opportunity to show so far this season. He had 111 catches for 1426 yards last year, and he is nowhere near that pace this year. He is more in the ballpark of 900 yards, similar to his rookie season.

But he can do more. Diontae Johnson can do more. James Washington and Donte Moncrief can do more. Vance McDonald has the potential to be a big-play threat out of the slot, and their running backs have shown to have strong hands and the ability to create yards after the catch.

If they can sustain success on the ground and start connecting on deeper targets in the passing game, then perhaps they can live up to Smith-Schuster’s expectations for his own group. But that will require more on the part of their young quarterbacks, presumably Rudolph at this point, who has been a little more conservative than expected.