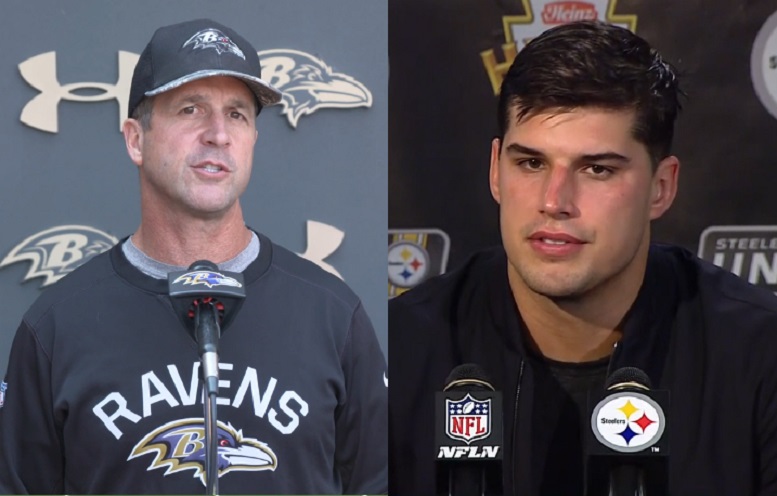 While the Pittsburgh Steelers defense is preparing this week to face Baltimore Ravens quarterback Lamar Jackson for the first time as a starter on Sunday, their opponent is conversely preparing to face quarterback Mason Rudolph for the first time. On Wednesday, Ravens head coach John Harbaugh was asked to comment on Rudolph now that he’s gotten time to watch the young quarterback and specifically if he thinks the Steelers are doing anything different conceptually on offense with the Oklahoma State product now in playing place of injured quarterback Ben Roethlisberger.

“It’s the same offense,” Harbaugh said. “I mean it’s within the structure of their offense. The Steelers have a big playbook, you know, so they’ve got a lot of different directions they can go. They went to the Wildcat this last week, so they’re going to come up with ideas, whatever they need to do to move the ball to try to score points and try to win a game is what they’ll do.

“That’s what anybody does in a game plan. He’s a young quarterback, he’s got a lot of talent. They’ve got players around him; they’ll try to utilize those guys as best they can. And I’m sure we’ll see some things that we haven’t seen.”

It will indeed be interesting to see what the Steelers manage to come up with this week regarding an offensive game plan to use against the Ravens and especially them no longer being able to use the Wildcat as a surprise element after using it seven plays Monday night against the Cincinnati Bengals. Will the Steelers again continue to try to limit Rudolph’s exposure to the opposing defense Sunday at Heinz Field with a new scheme wrinkle? We’ll see, but Harbaugh doesn’t sound too concerned about what the Steelers offensive game plan will ultimately be.

“That’s really not the concern as much as it is us doing our job, playing our defense the way we’re supposed to play it,” Harbaugh said Wednesday. “Everybody doing their assignments with physicality and speed and effort and great tackling and play the ball well. So that’s what we’re focusing on.”

In the 10 quarters that Rudolph has played this season after taking over for the injured Roethlisberger a huge amount of his throws have been either behind the line of scrimmage or just slightly past it. Because of that, Harbaugh was asked on Wednesday to describe what the Ravens defense will need to do on Sunday to take away those shorter throws and thus possibly force Rudolph into an uncomfortable situation that might include him needing to throw further down the field more.

“Well, you’ve got to play your defense the right way,” Harbaugh said. “I mean, there’s all three levels. There’s quick game, there’s screens, there’s intermediate level passes, and there’s different versions of those. There’s high -low, there are horizontal passes, there are crossing routes and mesh routes that you have to deal with. And then there are deep throws in all parts of the field that come off a drop back and play action.

“So, you know, they’re gonna throw elements of all that. They’re gonna, you know, try to figure out where we’re going to be vulnerable and we can’t be vulnerable. We just have to play our coverages the way they’re supposed to be played aggressively with confidence and stop them.”

Finally, Harbaugh was asked Wednesday how he goes about scouting a quarterback as young and as fresh as Rudolph is when there’s not currently a lot of NFL tape out there on him.

“You watch the tape that you have,” Harbaugh said “I mean, he is what he is, you know? The tape says it. I don’t care if it’s one game or 10 games or a hundred games, you are what you are as a player. You are what the tape says you are.”

While Harbaugh doesn’t have a lot of NFL tape on Rudolph to study this week, there is a lot of college tape on the Oklahoma State product and that footage includes him being successful quite a bit throwing the deep ball. Will Rudolph get a chance to throw deep more on Sunday against the Ravens and will Harbaugh’s defense be ready to defend against it if he does? We’ll see, but it’s worth noting that the Ravens defense has already given up six pass plays of 40 yards or longer through four games and they currently lead the NFL in that dubious stat. That defense also currently ranks in the bottom third of the NFL in deep passes completed against it.

Maybe the Steelers study of the Ravens defense will reveal that it is what is and that’s vulnerable to the deep pass. After all, you are what the tape says you are, right?